Richie Buckley is the boss of himself, and Seán Mac Erlaine is double-jobbing this week 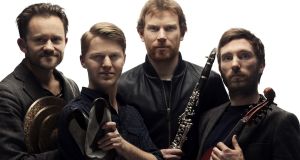 This Is How We Fly: landing in Fumbally Stables in Dublin on Thursday, while their reed player Seán Mac Erlaine joins other jazz spirits for a haunted house party in Dublin on Sunday

Richie Buckley’s list of former employers may be a who’s-who of 20th century music – from Van Morrison and Bob Dylan to Freddie Hubbard and Jon Hendricks – but the best way to hear the legendary saxophonist is when he is surrounded by old musical friends and has only himself to please. An A-team rhythm section of guitarist John Moriarty, pianist Phil Ware, bassist Paul Moore and drummer Kevin Brady join Buckley for what will be a wide-ranging conversation on the subject of swinging one’s ass off.

Bottlenote: The Power of Two

Bottlenote are fearless explorers at the frontiers of music, and the Dublin collective’s annual sonic love-in, in the palatial dilapidation of a deserted Georgian house on North Great George’s street, has to be one of the city’s most challenging and unusual musical events. Guitars, saxophones, vintage keyboards and home-made synthesisers echo through the faded grandeur, and the necessarily small audience (hence the two show times) is invited to move through the space, following their ears, experiencing rather than simply listening to the music. This year’s spirits in the material world include New York-based keyboard whiz Justin Carroll, guitarist and synthesiser guru Shane Latimer and This Is How We Fly saxophonist Seán Mac Erlaine (see below).

You Won’t Forget Me is vocalist Emilie Conway’s celebration of the life and work of Maeve Brennan, the Ranelagh-born writer who, as the Long-Winded Lady, was a much-admired social diarist with the New Yorker during the 1950s and 1960s. The ethereal Conway has woven together extracts from Brennan’s writing – read by actor Cathy Belton – with an eclectic musical selection that charts Brennan’s progress from daughter of Irish revolutionaries (her parents were both active in the 1916 Rising) to doyen of New York’s high society to respected short story writer to abject destitution in later life. There’s a pre-concert talk from academic Angela Bourke, author of the Maeve Brennan biography Homesick at the New Yorker.

This Is How We Fly

Gravity-defying supergroup This Is How We Fly artfully elude the genre nets. Though rooted in the Irish tradition - thanks in no small part to Gloaming fiddler Caoimhín Ó Raghallaigh – this quartet of adventurers in the musical slipstream are taking it somewhere new and exciting, with delicate rattling from Swedish folk percussionist Peter Berndalen and lyrical interference from Dublin reed player Seán Mac Erlaine, while Michigan percussive dancer Nic Gareiss literally takes off. In the future, this is how we will all fly.