Legends of the fall

They have a combined age of well over 1,000, combined record sales of more than one billion, and they’re all coming here on tour in the next few months 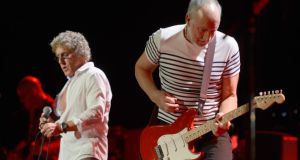 Roger Daltrey and Pete Townshend of The Who, who play Dublin's O2 on Saturday, June 8th

Another year, another traipse around the larger venues to see performers who could, if they wished, travel around for free on public transport instead of on plush coaches and private jets. But why do these men want to do this? (It’s mostly men – females of a similar age are rather less conspicuous.)

For some, it may be the money, but for others it must surely be either habit or compulsion. Or perhaps it’s genetic – they just have to leave the house and play, whether they need to or not. Or maybe – quelle surprise – it’s ego. Why would anyone want to sing the same songs all over again on yet another tour if it wasn’t for a need for adulation?

Still, it has to be said that some of these people are still making music of worth. Yes, out of courtesy to their loyal fans they drag out their best-known songs, but you have to hand it to at least a few of them: their latest albums kind of hit the spot. And in a live setting they’re still able to generate an atmosphere that is not just nostalgic but also, for some, optimistic. You’re thinking, well, if Lennie Cohen can still hop about on stage like a spring lamb at the age of 78, there is hope.

It makes you wonder who might be on the heritage/nostalgia trail in 2033. What’s to stop the likes of Madonna, U2, Robbie Williams and Take That stepping out and flashing their egos, yet again, in the face of their fans? Stranger things have happened.


THE WHO
Who they? Formed in London in 1964, The Who, above all other rock bands of that era, influenced future musicians who wanted to use aggression as well as melody to make their mark. Classic proto-punk songs such as My Generation, Anyway Anyhow Anywhere and I’m a Boy set the tone for bands as diverse as U2, Flaming Lips and Pearl Jam.
How old? Remaining original members Daltrey, 69, and Townshend, 68.
Best moment back in the day? Keith Moon’s whirlwind drumming, Pete Townshend’s windmill guitar style, John Entwistle’s bass solo on My Generation and Roger Daltrey’s big swinging microphone.
Can they still cut it? In a live setting, yes, they still rock it hard and fast with a doozie of a back catalogue. Sadly, their most recent album, 2006’s Endless Wire, was a stinker.
Playing when? Saturday June 8th, O2, Dublin.


NEIL YOUNG
Who he? One of rock music’s finest songwriters. His work is characterised by highly personal and political lyrics, an unparalleled stubbornness, filigree folk touches and a shredding guitar style that puts younger guitarists to shame.
How old? 67.
Best moment back in the day? Take your
pick from his early folk albums, After the Goldrush (1970) and Harvest (1972), and his fan-disconcerting guitar albums Ragged
Glory (1990) and Weld (1991).
Can he still cut it? Christ, yes. This Canadian is still kicking against the pricks, his latest album (with old chums Crazy Horse),
Psychedelic Pill, is a guitar-heavy gem.
Playing when? Saturday June 15th, RDS, Dublin.


ELTON JOHN
Who he? UK songwriter Elton John has sold more than 250 million records throughout a four-decade career, making him one of the most successful recording artists ever.
How old? 66.
Best moment back in the day? The first half of the 1970s saw John release eight albums that quickly established him (with co-songwriter Bernie Taupin) as one of the finest pop tunesmiths of that decade.
Can he still cut it? Inevitably, quality control has suffered across the years, but latter period albums such as 2006’s The Captain & the Kid, and 2010’s The Union (with Leon Russell), prove there’s cred in the salty old dog yet. Forthcoming album The Diving Board promises to be a collection of stripped-back, piano-led songs.
Playing when? June 23rd, The Marquee, Cork.

ROD STEWART
Who he? Rod the Mod. Rod the Lad. Rodders. One of the best-selling artists of all time – he has sold more than 100 million records worldwide, you know.
How old? 68.
Best moment back in the day? As well as being pivotal in the formation of good-time lads band, The Faces, Stewart produced a string of solo albums in the late 1960s and early 1970s that have effortlessly stood the test of time: An Old Raincoat Won’t Ever Let You Down (1969), Gasoline Alley (1970), Every Picture Tells a Story (1971) and Never a Dull Moment (1972).
Can he still cut it? Stewart has always been an entertaining live act, but only the most forgiving fan could overlook his awful American Songbook series of albums and last year’s abysmal Christmas album (Merry Christmas, Baby). For the new album, Time, Rodders has been writing songs for the first time in decades. Frankly, it suits him.
Playing when? Saturday June 29th, RDS, Dublin.

BRUCE SPRINGSTEEN
Who he? The Boss, that’s who. And wipe that smile off your face when I’m talking to you.
How old? 63.
Best moment back in the day? Take your pick from his 1975 breakthrough album, Born to Run, 1978’s Darkness on the Edge of Town, 1980’s The River, 1982’s Nebraska, and 1987’s Tunnel of Love.
Can he still cut it? Yes. 2002’s The Rising, 2005’s Devil & Dust, 2007’s Magic, and 2012’s Wrecking Ball reveal an artist who still marries a keen social and political conscience with songs that rock, roll and remain on the right side of sincere.
Playing when? Saturday July 20th, Kings Hall, Belfast; Saturday July 27th/Sunday July 28th, Nolan Park, Kilkenny.


LEONARD COHEN
Who he? Canadian poet, novelist and
singer-songwriter, highly adept at exploring interpersonal relationships, sexuality, religion, depression and – quite microscopically – the meaning of life.
How old?: 78.
Best moment back in the day? The austere, but often startlingly beautiful 1967 debut, Songs of Leonard Cohen, and its 1969
follow-up, Songs from a Room.
Can he still cut it? Surprisingly, yes. Following a self-imposed exile, Cohen returned in 2001 with the album Ten New Songs. His latest album, 2012’s Old Ideas, contains songs as good as any he has written.
Playing when? Wednesday September 11th/ Thursday, September 12th, O2, Dublin.

ROGER WATERS
Who he? Founding member of Pink Floyd, one of the cornerstones of psychedelic rock music. Waters has toured extensively as a solo act for over 13 years.
How old? 69.
Best moment back in the day? As a member of Pink Floyd, he was involved in the creation of era-defining albums such as 1967’s The Piper at the Gates of Dawn and 1973’s The Dark Side of the Moon.
Can he still cut it? Yes and no. His solo albums are dreary affairs, but his lavish touring of the Pink Floyd albums The Dark Side of the Moon and The Wall means Waters can nonetheless justifiably stake a claim for greatness.
Playing when? Wednesday September 18th, Aviva Stadium, Dublin.

FLEETWOOD MAC
Who they? The band behind the classic 1970s album Rumours. Nuff said.
How old? The current members are Mick Fleetwood (65), John McVie (67), Lindsey Buckingham (63) and Stevie Nicks (65).
Best moment back in the day? As a British blues band, 1968’s Need your Love so Bad.
As a reconfigured UK/US pop band, 1977’s Rumours.
Can they still cut it? In a live setting, yes – they’re all highly proficient musicians and vocalists who perform the old hits very well.
Playing when? Friday September 20th/Saturday September 21st, O2, Dublin.


BARRY GIBB
Who he? The eldest and last surviving member of the Bee Gees. The Guinness Book of Records claims Gibb as the second most successful songwriter in history (behind Paul McCartney).
How old? 66.
Best moment back in the day? There are several: the Bee Gees had a high success rate. Choose from 1960s hit To Love Somebody, 1970s hits How Deep is your Love and Stayin’ Alive, and 1980s hit You Win Again.
Can he still cut it? Difficult to say, as his appearance in Ireland in September marks his first solo tour. As a pop songwriter, however, Gibb is virtually flawless.
Playing when? Wednesday September 25th, O2, Dublin.

BILLY JOEL
Who he? A true-blue American hit maker across from the 19 70s through the 1980s and into the 1990s.
How old? 64.
Best moment back in the day? The 1977 album, The Stranger, and the 1978 album, 52nd Street, contain the best examples of Joel’s adult-confessional style.
Can he still cut it? He hasn’t released a pop-orientated album since 1993’s River of Dreams, but the hits will carry him through the shows on his forthcoming winter tour.
Playing when? Friday November 1st, O2, Dublin.

Starting out on the road to partition
6

Careless whispers: how the German public used and abused the Gestapo
9 What does Stacy's mom have going on?
10

'Flight': a snapshot of Ireland a decade before its time
Real news has value SUBSCRIBE