St Flannan’s is a challenging acoustic for musicians; here their solution is an energetic approach 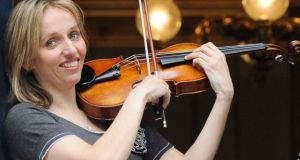 The performance of Mendelssohn’s youthful Octet, led by Katherine Hunka (above), buzzed with energy. The audience loved it. Photograph: Sasko Lazarov/Photocall Ireland

The original festival was an accurate reflection of the dynamism of the orchestra after its 1995 relocation to Limerick. Visiting artists included violinists Augustin Dumay and Ruggiero Ricci, pianists Maria João Pires and Stephen Kovacevich, and the Brodsky Quartet. The repertoire extended to Bach’s St John Passion and Philip Glass’s Third Symphony, and in 2001 included the Irish premiere of Handel’s then recently rediscovered Gloria.

The new festival is altogether more modest. It’s still based in St Flannan’s Cathedral, but it features just chamber music and song, and its reach is local. Artistic director and ICO viola player Joachim Roewer draws in colleagues from the orchestra and musicians from elsewhere in the country. The festival uses seating at the front of the cathedral, with the back area functioning as a kind of foyer, which is a good ploy for bad weather.

What the two festivals have in common is the venue’s extremely unwieldy acoustic. You can sometimes imagine that the sound goes everywhere and anywhere before it reaches the listener in a blurred and weakened state. The ICO experimented in various ways to dry out the sound, and managed significant improvements. It was rather startling in Ravel’s String Quartet, the first work I heard on Saturday, to be reminded how confused and confusing the sound in St Flannan’s can actually be.

The style of playing didn’t really help. First violinist Mia Cooper showed an eagerness that freely escalated into overkill, as if digging into the string for gutsiness was the way to make the music come fully alive. In St Flannan’s, the opposite is typically the case: the lighter the playing, the more the audience will get out of it. The sound has to be scaled down in order to retain its shape.

Over the two programmes I attended, this was nowhere more clear than in the opening of Bach’s Musical Offering, in which the three-part Ricercar was played on solo harpsichord by the Limerick-based Israeli musician Yonit Kosovske. The sound was tiny, almost hard to hear at the start. But once the audience adjusted and hushed themselves, there was an aura of concentration in which you could have heard a pin drop.

Pianist Hugh Tinney, who featured in the Schumann Piano Quintet, and in Brahms’s two songs with viola (with soprano Lynda Lee and Roewer) and Poulenc’s Banalités, showed real sensitivity. Lee’s strong-voiced singing, however, was too consistently forthright to convey much variety of mood.

Overall, the style of music-making had the air of a jam session about it, of musicians letting their hair down and having a good time.

The closing performance of Mendelssohn’s youthful Octet, led by Katherine Hunka, buzzed with energy, not of a sophisticated variety but more along the lines of “never mind the quality, feel the width”. After all, the composer appended a note when the parts of the work were first published: “This Octet must be played by all the instruments in the style of a symphonic orchestra. Pianos and fortes must be exactly observed and more strongly emphasised than is usual in works of this type.”

The audience loved it, and the closing surge brought them enthusiastically to their feet.

A bit of a stretch

The KBC Great Music in Irish Houses festival may have abandoned many of the houses that were once its core territory, and I don’t think I’m alone in finding venues such as

the Waterways Ireland Visitor Centre a stretch too far when it comes to the “Irish houses” of the name. But artistic director Ciara Higgins has been stretching the festival in other ways, too.

My visit to Killaloe meant that I missed Sunday’s Dublin Musical Saunter, a series of six concerts intended to celebrate “Dublin’s importance on the international music scene throughout the centuries”. I was surprised that not a single piece by a living composer was deemed worthy of inclusion. Would anyone in any other artistic discipline try to represent the creative life of our capital city and exclude all living artists? I doubt it.

I did get to one of the other adventurous programmes, which paired Olwen Fouéré reading TS Eliot’s Four Quartets (directed by Tom Creed) and the Heath Quartet playing Beethoven’s Quartet in A minor, Op 132. The venue was downstairs at Smock Alley Theatre, as atmospheric a space as any the festival visits.

Eliot’s words are a challenging read, and even more challenging when spoken. Read them for yourself, and you will take your own time, with pauses, re-reads and time for reflection. Hearing them read, even with the carefully ritualistic delivery that Fouéré adopted, can make you feel as if you are always racing to keep up, that if only you could get your mind to run faster, or the voice to take even more time, you might get to absorb everything. It’s a stimulating state of overload, but also a draining one.

The possible connections between Four Quartets and late Beethoven have been much discussed. Even if you accept them as fact rather than speculation, I can’t imagine why you would want to segue from the poetry straight into the music without a break.

I was able to note how well the Heaths began their performance of the Beethoven (they are doing a complete Beethoven cycle at Kilkenny Arts Festival in August), but my concentration was so shot by trying to stay with the words, that the rest was something of a blur. A nice idea on paper became something of a trial on the night.

Wednesday’s Irish debut by American pianist Richard Goode at the Royal College of Physicians was disrupted by an external alarm at the National Library. But it didn’t seem to matter. As pianists go, Goode seems like a quiet-spoken introvert, who only fires up when the music insists on it.

His plain-speaking manner deals in the essentials. Janacek’s On an Overgrown Path, Schumann’s Davidsbündlertänze and the first book of Debussy’s Preludes seemed to reveal themselves in full. Wonderful.

Fathoms: The World in the Whale goes deep
10