Soundtrack of My Life: The Clear History host on songs that have got him through the pandemic 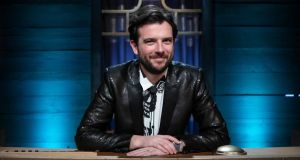 I’ve listened to less music throughout the pandemic, because I’m not travelling as much. But I still use music as a mood-altering device, an essential tool to get through the day, because music always picks me up. I go to country when I’m feeling melancholic and heavy metal when I’m feeling frustrated, which were my two predominant moods of the last year.

Generally, I’ve found this lockdown harder than the last one. I think we got through last year because we felt if we served our time we’d get out of jail, but now it’s like being told we have to serve another year. It’s like that Half Man Half Biscuit lyric: “And the light at the end of the tunnel is the light of an oncoming train.”

Overall, I feel fortunate that I was constantly working last year. And we had our first child in December, so I’ll associate 2020 with happy memories. Most of the year was spent preparing for the baby – getting the house ready and doing some DIY. The good thing about having a baby during a pandemic is that there’s zero Fomo – I’m not seeing pictures of my friends going to mad house parties.

I love outlaw country. The likes of Waylon Jennings, Willie Nelson, Johnny Paycheck, basically long-haired country singers who were mad into cocaine. I can listen to these wild auld lads all day

I love outlaw country. The likes of Waylon Jennings, Willie Nelson, Johnny Paycheck, basically long-haired country singers who were mad into cocaine. I suppose it gave their music more of a rock’n’roll influence and an outsider perspective. The modern country stuff does nothing for me, but I can listen to these wild auld lads all day.

I was snobby of heavy metal when I was a teenager. It seemed like a lot of macho, testosterone-fuelled wankery, an opinion that I adopted from being a fan of Nirvana, who positioned themselves at odds with the misogynistic hair metal of the late 1980s. Then I moved in with two friends who started bringing me to metal gigs, and I found them so joyous and therapeutic. It’s a great way to relieve stress, because you’re vicariously living through somebody doing scream therapy, basically. Plus metalheads are the nicest people you’ll ever meet at gigs.

Devin Townsend is probably my favourite musician. Last year, when my wife was pregnant, we were playing music to see what the baby would react to. She liked a few Busby Berkeley numbers, and some disco tunes, but when I stuck on Devin Townsend she went nuts. It felt like she was going ding dust on a double bass drum in there. That made me feel very happy – I was, like, “Class, she’s going to be into heavy metal.” Although it could have been like my neighbour banging on the wall for us to turn it down.

Townsend started off his career playing very loud, extreme metal, but his style developed to become more melodic and operatic. The last album, Empath, is a culmination of his entire career, and sounds more like a score to a space opera than a metal album. The song I chose – Spirits Will Collide – sounds more like Enya than Judas Priest. There’s positivity in that album too. I was going through a bit of depression when the album was released, and I was nearly in tears listening to it for the first time. It genuinely lifted me out of a funk, and it’s been on heavy rotation since.

I’m not great at keeping up with the latest cool music. I’m pure brutal, actually. I watch a lot of movies and shows, so I tend to discover music through soundtracks. I think I heard Assume the Position by Lafayette Gilchrist in The Wire and I first heard Lee Hazelwood in Eastbound & Down.

Lawless, by Christy Moore, gets darker and darker. You’re laughing at the start and crying at the end. That’s a sign of a good folk song

I like folk music: they’re songs that tell a story. One song that really blew me away was Lawless, by Christy Moore. I had never heard it before until my cousin Eamonn sang it for us one night at a family gathering. It’s a fascinating tune, because it draws you in with this comic tale of a drunken bowsie causing ructions, and as the song progresses it gets darker and darker until, finally, the last line punches you square in the gut. You’re laughing at the start of the song and crying at the end. That’s a sign of a good folk song.

Oh Deed I Do by Donovan has a special place in my heart. I sang it for my wife at our wedding. Every time we hear this we’re taken back to that moment, so I played it a lot last year.

Kevin McGahern hosts Clear History, which is on RTÉ2 at 9.30pm today, repeated on RTÉ One on Sunday at 10.30pm. You can also catch up on RTÉ Player