Kerry King: Where have all the guitar heroes gone?

Has the guitar lost its pre-eminent place in musical culture? Kerry King from seminal metal band Slayer thinks so 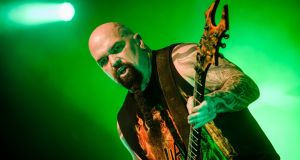 Guitarist Kerry King of Slayer: “When I was growing up, there were obvious guitar heroes – be it Richie Blackmore, Tony Iommi, Priest guys, Iron Maiden – guys to make me aspire to want to be like that guy.” Photograph: Stefan Hoederath/Redferns

The guitar is the musical instrument that changed the world. Without the guitar, there would have been no rock’n’ roll. Without rock’n’ roll, there would have been no rockabilly, no Elvis Presley, no Beatles, no Rolling Stones, no Britpop, punk, heavy metal, indie music or grunge. Nothing, in fact, for those of us who think rock is not rock unless there is a guitar in it.

It would have been unimaginable a generation ago to believe the guitar would ever lose its pre-eminent place in musical culture, yet where are the great guitar bands today? Where have all the guitar heroes gone?

Both questions are rhetorical. There are no guitar heroes anymore, none that has emerged in this millennium at least. A straw poll of great guitarists would include Jimi Hendrix, Jimmy Page, Slash, the Edge, Angus Young, Eddie Van Halen, Dave Gilmour, Mark Knopfler and Brian May. Estimable guitarists as they all are – or were in the case of Hendrix – none emerged in this generation.

There are no gunslingers anymore, nobody that would make any self-respecting teenager prance around his bedroom with a tennis racket or a hurley. Of those who have achieved reputations as guitarists in this millennium, John Mayer is better known for his girlfriends and Newton Faulkner is now in the musical American Idiot.

The demise of the great guitar player has been noted by Slayer’s guitarist Kerry King. Now 50, he had Richie Blackmore (Rainbow), Tony Iommi (Black Sabbath) and Hendrix as influences when he was a teenager.

King was part of a generation of metal musicians who, through the medium of thrash, incited another generation to take up the guitar, but that was then, this is 30 years later.

In an interview with The Irish Times conducted before Slayer’s recent sold-out show at the Olympia Theatre in Dublin, King lamented the absence of a new generation of guitar heroes.

“When I was growing up, there were obvious guitar heroes – be it Richie Blackmore, Tony Iommi, (Judas) Priest guys, (Iron) Maiden – guys to make me aspire to want to be like that guy,” he said.

“Then there was Slayer, there was Metallica, there was Exodus – again a wave of people to whom, if I was a kid, I would aspire to be that guy. I don’t think that exists anymore. The people who were there are still there.

“I remember we were playing a South American festival and I went over to Gary Holt (fellow Slayer guitarist). I said to him, ‘would these two guys want to make you play guitar?’ I already knew the answer. If there is no inspiration to be that guy, there seems to me to be a drop-off in guys playing hard-edged guitar.

“Bands that are going to take the place when bands like Black Sabbath, Judas Priest, Iron Maiden and Lamb of God are gone... I don’t know who is going to be big enough to take their place.”

The indie approach
The problem is not just confined to heavy metal – where guitar remains (the pun is intentional) king. The British indie tradition produced a slew of outstanding musicians who did the most difficult thing in guitar music – they made the instrument sound fresh and original. The incomparable Johnny Marr (The Smiths) is one of a long list of British musicians who made us think again about the guitar. Others include Graham Coxon (Blur), John Squire (The Stone Roses) and Bernard Butler (Suede).

Last year, he said: “In theory, the internet and YouTube should be helping new bands get off the ground but it hasn’t – it’s got worse. The record labels just aren’t interested in working-class bands any more.

“[Rock’n’roll is not dead] as long as I’m still going, it’s fucking not. It’s there but it’s certainly lacking the re-generation process.

“Since the Arctic Monkeys, Kasabian, Razorlight and The Libertines, there has been nothing. You name me one band since them. So that’s 10 years ago. So the evidence is that it is kind of in hibernation.”

What do you think? Why are there no more guitar heroes?

- Slayer are headlining Bloodstock on August 14th at Catton Hall in Walton-on-Trent, England