Keilidh Cashell: ‘I gravitate towards artists who don’t care what anyone else thinks’

Soundtrack of My Life: The make-up artist and influencer on George Michael, Miley Cyrus and Queen 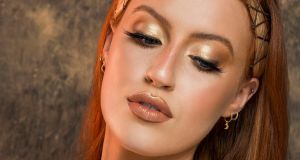 Keilidh Cashell: I become obsessed with songs to the point that everyone around me gets sick of them.

Like everyone else, my pandemic has had its ups and downs. I’m lucky that I can work from home. It’s meant I’ve been able to focus on building Kash Beauty and creating content. In normal times there’s a peak time to post on social media, but now everyone’s on their phones constantly, so any time is a great time.

I did things like make-up challenges on TikTok to keep people, and myself, occupied, which seems to have brought new people to my page. In January 2020 I’d reached a million followers, then it took just six months to gain another million. Now I’m up to almost three million.

It’s funny, because if I was to think about three million people looking at me I’d run for the hills. So I have to try not to think about that, while still remembering that there are people behind the numbers.

When I was coming up with my playlist, I turned to TikTok to refresh my memory on any songs I might have listened to over the pandemic. There were songs I was obsessed with at the time – such as Savage by Megan Thee Stallion, which was huge when the pandemic first started – but I tend not to listen to them now.

For me, music is everything. We underestimate how good music can make us feel. I always listen to music while I do my make-up, and the pandemic has made me more aware of how it can affect my mood. If I wake up on the wrong side of the bed I put on my favourite song, and it can change everything.

Looking through my playlist, the songs I’ve chosen are the ones that make me feel like a bad bitch. If I’m driving my car they’re the ones I can scream along to. They’re the ones that release endorphins for me. I think that’s especially important now, when we’ve been denied hearing music at concerts and singing and dancing.

In usual times my boyfriend and I would go to gigs all the time. We had tickets for shows that got cancelled or postponed, such as the Hella Mega Tour with Green Day, Weezer and Fall Out Boy. We had tickets to Dua Lipa, and we had tickets to Coachella for the first time, so I’m raging, but I know it will get going again eventually.

I tend to like pop with a rock edge, and a sprinkle of hip hop, but I have a varied music taste, and I can become obsessed with songs that are outside my usual range, whether it’s a random country song or a rap song. I become obsessed with songs to the point that everyone around me gets sick of them. My boyfriend always laughs because I could be playing a really heavy song and then play Shania Twain, and he’ll complain there’s no pattern there.

I’ve included two of George Michael’s songs because I adore him. He was my first crush, and I was devastated when I found out he was gay… as if I had a chance anyway. I named my dog after him too: his name is George. Both Careless Whisper and Freedom are so iconic, but, overall, the songs I’ve picked aren’t necessarily the big singles, as with Miley Cyrus’s Plastic Hearts. I always wonder how artists choose their singles – when you listen to their whole album you often find real gems that are so much better.

There are also a couple of Queen songs in there. I love that Freddie Mercury is so unapologetically himself, and doesn’t give a shit about what anyone else thinks. Every time I listen to him I feel that way. I wonder why we worry about stupid things when we can be a bad-ass person and live our life that way.

It’s the same with YungBlud. He also embodies living his life as he wants. I seem to gravitate towards artists like that, and it’s something I strive for in my own life. Even Miley Cyrus is like that – how many times has she changed over the years, and people try to knock her down, but I love it; it inspires me.

I’m raging that WAP by Cardi B came out during the pandemic. I feel that we were robbed because we weren’t able to go out and dance to it. Maybe it was a good thing, actually – we would have made a show of ourselves on the dance floor. – As told to Shilpa Ganatra