Joseph: ‘We need a call to arms’

Gigging in bars made Natalie Closner realise "there are people who prey upon people’s dreams". Now, she says, "we need a call to courage in the face of daunting darknesses" 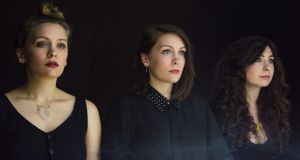 There’s no need to ask Natalie Closner about where she met the other members of Joseph. This trio of sisters with bewitching voices and infectious folky pop songs didn’t have to go down the road most bands travel when they’re seeking new members. All the same, it’s worth noting that it took Closner a good few years to realise that what her songs required was input from younger siblings Meegan and Allie.

There was music in the Closner family background, though it didn’t involve the three sisters singing together. Closner recalls that her father had been a keen amateur jazz vocalist and regaled the kids on long car drives with tales from his past adventures. For the youngsters growing up in the rural wilds of Oregon, these stories, and the jazz standards he and his friends would sing at family gatherings, were cool and exciting.

Closner says that their family background was a little different to most.

“Some people would say we were very sheltered – it took me a long time to learn the ways of the world – but because of that, we got to have fun and not worry about the bigger things. We were home-schooled for a time and it was a Christian household. We grew up in a family where we got to be kids and our parents were and are big dreamers and believers, and encouraged us to overcome obstacles.”

After school, Closner went to Seattle where she studied classical music before deciding that writing and singing her own songs was of more interest. She then hung out in Nashville and Los Angeles attempting to follow a music business star.

“There were some negative experiences and there are people who prey upon people’s dreams,” she remembers of her time in studios and small clubs. “I think I learned so much because being around the industry and being immersed in it and being with people who are actually working as opposed to talking about it like you do in college is crucial.

“Learning how to play guitar and going to a tiny bar by the beach and trying out my songs on an audience of five people and drinking Coronas was absolutely essential to where I am today.

But it was only when Closner came home to Oregon that she realised she needed to enlist some help from her family to make her songs really resonate.

“If I had known that, I would have had made it happen sooner,” she says of that revelation. “It was right there in front of me the whole time and I still can’t believe that I didn’t see it sooner. It became so apparent to me that I knew I had to convince the two of them to join me.”

Aside from adding brilliant harmonies to the material, the other sisters brought a new perspective to the songwriting.

“Before, I would have meticulously paid attention to how a song works, trying to decipher the formula and being very academic about it. But the other two have never considered that because they’re unschooled in that. Getting them in a room and seeing them break the rules that I have about songs is a complete revelation for me.”

Equipped with a new name (in honour of their grandfather who hailed from Joseph, Oregon), they released their debut album, Native Dreamer Kin, in 2014 and began to make inroads. However, it’s their second album, I’m Alone, No You’re Not, released last year, which has seen a rise in appeal and profile.

Produced by Mike Mogis, who previously worked with Bright Eyes and Jenny Lewis, the album saw the trio work with co-writers for the first time.

“The co-writing process is such a funny world,” notes Closner. “We were new to it and a bit sceptical because I have a lot of peers and artistic friends who would say that it’s not a good idea.

“It’s an amazing thing to walk into a room with a stranger and produce something. Actually, no, it’s terrifying! It does not always work, but when it does, it’s an amazing experience. When we met with these people, most of whom we’d never met before, we were open to learning and collaborating. It was special to meet someone like Ethan Gruska from Belle Brigade, whose music I’d admired for a really long time.

“The songs that felt the most honest and true rose to the top and it was a case of, ‘oh my goodness, we’ve written some pop songs,’ which we didn’t plan. We followed the lead of where the songs would lead us.”

One of those songs is White Flag, a song which Closner says was a response to the fear culture of current events and has become a real rallying call for many.

“I’ve had just incredible emails from people about that song,” she says. “Someone will say, ‘I heard the song on the radio and it gave me the courage to come out to my parents finally.’ When you hear something like that, you’re blown away.

“I didn’t expect the situation we’re in right now in America to happen and I’ve a lot of friends who certainly didn’t. Now, more than ever, we need a call to arms, a call to resistance, a call to courage in the face of these daunting darknesses which are before us.”

-  I’m Alone, No You’re Not is out now. Joseph play Whelan’s, Dublin, on February 3rd

Netflix: 10 of the best new shows and films to watch in October
5

Indecisiveness led to home of The O’Rahilly being demolished
7

The Boys in the Band is theatrical, dated and utterly fabulous
10