Too many people asked Jarvis Cocker to make a new album, so the Pulp frontman just announced plans to present 20 fake vinyl records at a summer art exhibition 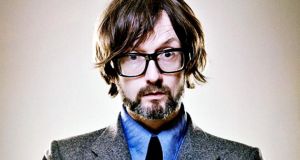 Too many people asked Jarvis Cocker to make a new album, so the Pulp frontman just announced plans to present 20 fake vinyl records at a summer art exhibition. Red Bull Space Paris will host his 20 Golden Greats show between June and August, where the fictional hits will appear alongside live footage of audiences.

After finishing the Pulp tour in 2012, Cocker was at a loss attempting to explain his lack of future plans to anyone prying him for tunes. His responses became incrementally more abstract and inconclusive until eventually the sentiment became “It’s vinyl, Jim, but not as we know it”. Like many jokes, this was unintentionally carried through to fruition in the form of fine art.

Not able to fully rule out a Pulp reunion, Cocker has always had gripes with what people expected of the group. “At one point we were supposed to be ‘wacky’,” or sometimes, he thinks, they were presented as parochial or ironic, “which always really got my goat”. Compiling an exhibition of satirical vinyl (that started as a joke) is his way of denouncing their wacky and ironic image.

Even though Cocker’s endeavour is somewhat serious, fake albums are ripe on the week of April Fools. Most admirably, The Flaming Lips announced their non-album Flaming Side of the Moon this time last year, complete with spoofed conferences and made-up trailers.

Trent Reznor did the same in 2009. He issued a press release for the Nine Inch Nails fictional collaboration with Timbaland called Strobelight, featuring the tracks Coffin on the Dancefloor and On the List (She’s Not). As terrible as it sounds, we really wish that one was for real.