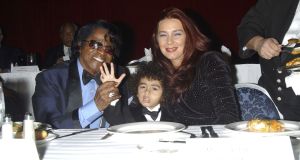 In an age when everything happens live in front of our eyes, we think we know all there is to know about our cast of public figures. Social media and our own nosiness means we feel we know our pop stars, politicians and minor local celebrities insideout and upside-down. If they’re hiding anything, some random tweet or late-night video record will flush out the real character.

With James Brown, we kind of thought we knew everything about the Godfather of Soul when he died on Christmas Day 2006. All the triumphs and transgressions were out there in the open to see. We knew about the highs and lows, from putting the spark into the funk in the 1960s to a string of legal, personal and drug problems which dogged his life and culminated in a 1988 car chase, arrest and prison spell.

Because of all this, Brown was seen as an open book, so there’s a sense that there’s not a lot more to be got at. Since his death, there have been a few attempts to cover the waterfront – RJ Smith’s book The One: The Life and Music Of James Brown was excellent, the Get On Up film was not – but surely there’s not a lot more to be mined from his story?

Enter James McBride, the author of The Color of Water and The Good Lord Bird. He felt there was more to the story than the caricatures and cartoons and set out to bring it to the fore in his biography Kill ‘Em and Leave: Searching for the Real James Brown and the American Soul.

The last part of that title is important in McBride’s quest. In the author’s view, the fact that Brown came from the American South is vital to trying to understand the demons and ambitions which drove him.

“There is nowhere in the USA quite like the American South,” writes McBride. “You cannot understand Brown without understanding that the land that produced him is a land of masks. The people who walk the land, both black and white, wear masks, then masks beneath those masks.”

To find out what’s beneath those masks, McBride goes in search of the people who knew Brown, many of whom hadn’t spoken much in public or on the record about him before.

McBride gets their take on the man they encountered from accountant David Cannon, lawyer Buddy Dallas, various relatives, including his first wife Velma, former road manager Rev Al Sharpton and funeral director Charles Reid (who talks about Michael Jackson spending a night with Brown’s body). He even hears from some of the then children who remember Brown as a young high-school janitor bunking off to play the piano in the basement.

What emerges from this fine, highly readable mix of old-school reporting, criticism, history and sociology is a portrait of a man fighting chaos at every turn from an early stage in his life.

Brown was someone determined to best the racism which dogged his life and to show others how to succeed (hence his famous “stay in school” request to kids he met). At the same time, he was a man capable of mean behaviour, domestic violence and unpredictable, shabby treatment of those around him.

The Brown that McBride finds on his journey is all of the above and more. Misunderstood and misrepresented on the one hand and a powerful icon of black music on the other, you couldn’t and didn’t have one without the other. Sometimes, even with someone we think we know very well, the shorthand just doesn’t stand up to closer scrutiny.

YA fiction: Children of Lir’s Aífe tells her side of the story
6

The Arab-Israeli conflict in 10 points
9