Is it time for Dublin to appoint a second mayor to manage its nightlife?

Realising just how much nightlife can be worth to the municipal coffers, many cities around the world now have a second mayor - is it time for Dublin to follow suit? 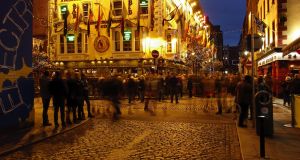 Is it time for a city like Dublin to appoint a night mayor? It might be a strange question to ask, especially as most citizens of the capital probably couldn’t name the current incumbent of the gaff on Dawson Street without resorting to Google. However, it might be an appointment worth considering if Dublin or any other city is serious about managing its nightlife.

The idea of a night mayor for music cities and other entertainment hotspots formed the basis for a fascinating panel at last week’s South By Southwest conference. The participants were Mirik Milan and Chris Garrit, the night mayors for Amsterdam and Groningen respectively, Austin’s music and entertainment manager Don Pitts and music producer Simon Lamb.

Their discussion focused on the role to be played by a person mediating between City Hall and local venue and club owners and music promoters. It’s a task that entails a very different skillset to that of the usual city mayor. If the daytime is about politics and policing, Garrit explained, the focus at night switches to bars, clubs and venues.

Milan defined the role as being “a champion for night time activities at City Hall”. In the case of the Dutch, their offices are funded by their respective cities with matched funds from promoters and nightclubs, ensuring a buy-in from all interested parties.

Given that the discussion was happening in Austin, much was said about that city’s heavy economic reliance on the live-music sector.

Pitts spoke about the changing nature of the downtown area, with new hotels and apartment buildings springing up on blocks that once housed music venues. It’s a transformation that has led to many complaints about noise from the new arrivals.

Agent of change
Pitts explained that recent legislation introduced an “agent of change” ruling, meaning venues can’t be sued for being a nuisance if they were there first. “It’s about setting out who’s responsible for the change in the neighbourhood”, Pitts commented.

As a producer who has produced events such as Electric Daisy Carnival and Wonderland in Los Angles and Las Vegas, Lamb spoke about the huge differences in approach between the two cities. “LA learned from Vegas and especially the attitude of the police force,” he said. “Customer service is ingrained in the Vegas force because of the importance of tourism to the city.”

All agreed that the role of a night mayor is often simply to translate for the city and promoters what is going on. After all, as Lamb pointed out, the regulatory and licensing frameworks were not designed to accommodate the events now happening.

“Woodstock and a Deep Purple show in the 1970s which ended in a riot provided the templates for event planning in New York and Las Vegas.”

It’s also clear that a night mayor plays a big role in emphasising to the city just how much music and entertainment can be worth to the municipal coffers. All spoke about the importance of economic impact reports in persuading City Hall to adopt a more open and less antagonistic approach when it comes to nightlife. “People always focus on the bad stuff rather than the positive upswing,” Pitts noted.

With night mayors currently in place in Paris, Zurich, Toulouse, Groningen, Amsterdam and Nijmegen – and appointments due in London, Stockholm, Milan and Osnabruck – it’s clear we’re going to see and hear a lot more about this in the years to come.

New Irish Writing: A Little Cloud by A Joseph Black
10