How to scare your children with the Wainwright Sisters’ creepy songs

Martha Wainwright and her half-sister Lucy have a dark, strange new album that they reckon is for all the family 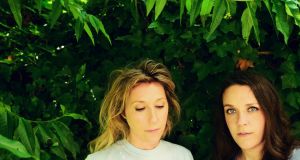 Music has always been a family affair for Martha Wainwright: folk legends Loudon Wainwright III and Kate McGarrigle for parents, Rufus Wainwright for a brother, and a husband who plays bass with her band and with many others. But her latest album takes the biscuit.

Songs in the Dark sees the Canadian musician team up with her half-sister Lucy Wainwright Roche for a collection of songs that soothe and scare. With tracks drawn from their childhoods along with traditional lullabies, covers of their father Loudon’s songs and more, it’s a record steeped in personal memories.

“We had never really sung together at all until recently,” Martha says on the phone from her home in New York. “Lucy started participating in our Wainwright- McGarrigle Christmas shows a few years ago, so we learned a couple of Christmas songs together, but then that was it really.

“We were close growing up, and we loved each other very much and we hung out, but we never really lived together. In the last few years, since my kids were born, she’s become a bigger part of my life, so it was also just an excuse to spend time with her. When we sat down to try a few songs, it was very evident very quickly how easy and fun this could be.”

The sisters are continuing a family tradition of singing siblings: Lucy’s mother, Suzzy, is a member of The Roches, a folk-rock trio that formed in the 1970s, while Martha’s mother sang with her sister Anna until the former’s death in 2010.

“The funny thing is that we didn’t really think about that when we made the record,” says Wainwright. “Lucy and I are connected through our father, but making this record, the conversation has been about the similarities between the Roches and the McGarrigles. I think that in many ways – and it sounds cheesy – we’ve kind of closed the circle, in a sense. It’s actually brought these two women together more than one would ever expect, by Lucy and I doing this.

The idea for Songs in the Dark came to Wainwright when a friend gave her a mix CD of songs that she would listen to at night-time, when she was putting her children, Arcangelo (6) and Francis (1), to bed. There was only one common thread: the songs were tinged with a certain darkness, whether it was Simon and Garfunkel’s version of El Cóndor Pasa or Townes Van Zandt’s Our Mother, the Mountain.

“There are a lot of songs that you wouldn’t really sing to your baby a cappella, lullaby-style, because they’re really really intense,” she says. “This was really a record, I think, for children and adults to share. It’s not really a children’s record specifically, but it’s something that you can play at night-time for the whole household quietly, that sort of washes over you all.

“It’s a way for different generations to come together. A lot of the time you put on a kids’ record and you have to kind of cover your ears because you can’t stand it, but people forget that kids need to know about some of the harder things in life too. There were specifically chosen songs that had to do with babies, and are lullabies, but that also have a negative slant or at least a dark tinge in there.”

There is also humour amid the shadows: motherhood undoubtedly played a big part in this album’s creation, and a spoken-word monologue on Baby Rocking humorously recounts the warts-and-all realism of being a parent.

The family aspect rears its head on some of the song choices, too, such as a cover of Loudon Wainwright’s Screaming Issue, which was written for Lucy when she was a child. (Martha agrees that I’d Rather Be Lonely, which her father wrote about his frustration when Martha came to live with him as a teenager, wouldn’t be a great choice for this particular album.)

“I know my dad loves the whole record; I think he’s very enthused by it. It must be an interesting feeling for him, to have his kids sing these songs that were written about them. I’m used to making my dad nervous with my music and going as far as to offend him,” she says, laughing, “so I think he was really relieved.”

Although she agrees that it would be nice to continue working with Lucy and perhaps expand their new musical partnership, Martha will return to the grind to release the follow-up to her most recent studio album, 2012’s Come Home to Mama, next year. It is already half-done, she says, and she has had some songwriter friends, such as Glen Hansard and Beth Orton, contribute songs for her to sing.

Until then, she will focus on getting Songs in the Dark incorporated into night-time routines around the world.

“It just calms down the space if you play it quietly in the background,” she says. “It’s designed to just lull everyone in the house into the night-time. I find it very enjoyable to listen to with my children, but also, it was a lot of fun to make. That was definitely the whole point of the record, to just have fun with these slightly creepy songs.”

Songs in the Dark, by the Wainwright Sisters, was released this month