Herculanum review: all smoke, no fire

Félicien David’s opera takes the explosion of Mt Vesuvius as its setting, but this production never manages to ignite 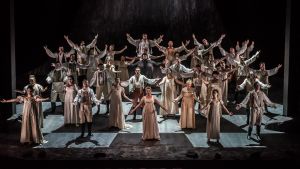 *** Félicien David’s (1810-76) place in history is not dependent on his operas or even his 1844 scenic ode-symphonie Le désert. This is his best-known work, and has been credited with sparking other French composers’ interest in oriental subjects.

David was a Saint-Simonian, and wrote male-voice choruses for the daily rituals of those early socialists. His pursuit of the cause brought him to Egypt and on his return to France he published a collection of Mélodies orientales for the piano, claiming authenticity for the material he used.

It’s his sole grand opera, Herculanum, first performed in 1859, that has brought him for the first time to the Wexford Festival. The action is set at the time of the eruption of Mount Vesuvius in AD79 and concerns the persecution of Christians in the time of the emperor Titus.

But it’s an opera. So Queen Olympia falls for a captured Christian, Hélios, and seduces him with the benefit of a magic potion. Her brother, the proconsul Nicanor, wants to seduce another Christian, Lilia, but is struck down by lightning for proclaiming “Your God does not exist,” after which Satan takes his place in disguise. And of course everyone is consumed by the eruption which closes the opera.

Director Stephen Metcalf updates the scene to the 19th century, with the Christians looking like convicts or prisoners in the dirty, grey outfits conceived by designer Jamie Vartan. The original 1859 production was celebrated for its effects, but the Wexford production is mostly dull, though the eruption itself is nicely done, the video of lava fading to leave everyone frozen as if in ash-covered grey.

David’s music is also rather flat, even when momentarily energised by doggerel-like dances or rich-toned choruses. But he had real instrumental skill, though the interesting touches in the orchestration as effectively communicated by conductor Jean-Luc Tingaud remain exactly that, interesting touches.

Italian mezzo soprano Daniele Pini is a suave Olympia, much more skilled at vocal countouring than the more edgy and excitable Lilia of Romanian soprano Olga Busuioc. The Hélios of Canadian tenor Andrew Haji and Nicanor/Satan of British bass-baritone Simon Bailey are more consistently full-on, with Haji providing the evening’s most consistently stylish singing. Only two numbers, an aria for Olympia and a duet for Lilia and Hélios, seem to probe beyond the cardboard character of a work that stubbornly refuses to come to life.