Opinion: It is better to be properly alone than exposed to a million bullies on the latest social network 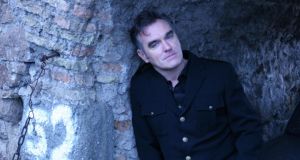 Morrissey: the protagonists of his songs moved through a world of railway cuttings, grim terrace gables and punctured bicycles, untouched by the coming flash of the Thatcher era.

Away from the US’s decision to reject anarchy and Ireland’s stealthy integration into greater Prussia, the big news this week concerned some much-anticipated scribblings by a middle-aged Mancunian.

It seems that, when not cooking up little-Englander epithets in his Californian hacienda, Steven Patrick Morrissey has been knocking together an autobiography. It’s time to tell the tale. After all, there’s more to books, but not much more. You know how these things go.

In times past, one would, when writing an article about Morrissey in these pages, have felt an obligation to explain who “The Smiths” were, what “indie music” was and why “rock ’n’ roll” was not some passing fad (while placing all such “trendy” terms within “inverted commas”). Given that the generation that moped to The Smiths is now the only demographic buying hard copies of newspapers, we will leave any such glosses aside.

There has been some chatter concerning the breathless momentum of Mr Morrissey’s book. The tome begins with an enormous paragraph that – in the manner, if not the style, of Henry James – stretches over several pages. Some reviewers have noted a slight easing of his hitherto hostile attitude to band-members Mike Joyce and Andy Rourke. He has come closer to defining his slippery sexuality.

Penguin Classics controversy
But, unusually, most of the controversy has focused on the publisher’s presentation of the volume. Autobiography comes wrapped in the famous black livery of the Penguin Classics series. Morrissey has jumped backwards over the Modern Classics – eat dust George Orwell, Aldous Huxley and Evelyn Waugh – to join such eternals as Ovid, George Eliot, Charles Di- ckens and the bloke who wrote the Koran.

To be fair, this is clearly a bit of a gag. Penguin is unlikely to treat future volumes by Luke Goss, Boy George or Tony Hadley in similar fashion. The decision offers a sly dig at those many miserablists who once treated each of Morrissey’s sombre lines with a seriousness more usually accorded edicts carved divinely into Middle Eastern tablets. There is also a nod towards the ancient pocket of the typical Smiths fan. Your current correspondent is not the only fellow who, while cradling Meat is Murder beneath his oxter, allowed one of Penguin’s classics to poke conspicuously from a corduroy jacket. Something in translation usually did the job. A little bit of Zola. A smidgeon of Balzac. That sort of thing.

All that noted, Morrissey – whose music never reacted to any subsequent shifts in fashion – does seem increasingly like a figure from the distant past. It was ever thus, of course. The imagery associated with The Smiths was mostly drawn from the pop culture of earlier decades. Terence Stamp, Pat Phoenix, Joe Dallesandro and Yootha Joyce were among the monochrome figures decorating the group’s LPs and singles. The protagonists of Morrissey’s songs moved through a world of railway cuttings, grim terrace gables and punctured bicycles, untouched by the coming flash of the Thatcher era. The further back in time Penguin can position him, the more appropriate it seems.

But there’s more to it than that. Few decades have thought themselves quite so modern as did the 1980s. Romantics were “new” and even occasionally claimed to be “futurists”. Haircuts became abstract sculptures that looked as if they’d been prepared for cast members of some particularly preposterous science fiction epic. The synthesiser and the sequencer finally took over music and turned Top of the Pops into an outtake from A Clockwork Orange. (Remember that Heaven 17 actually took their name from an imaginary band in Stanley Kubrick’s film.)

Nothing dates so quickly as any particular era’s conception of the future. But such were the fantastic ambitions of the 1980s – so much tubular steel furniture – that, for a decade or so, we half expected the coming century to resemble 1986.

Electronic connectivity
That all changed over the past 10 years. Few pundits (not even the prescient Steve Jobs) predicted our current addiction to electronic connectivity. Last week, I was talking to an author who, after working on a novel for a decade, realised that he was now forced to go back and turn the story into a period piece. Too many problems could be easily solved with a text, a tweet or an actual mobile phone call. Nobody with a handheld device is now ever really alone. Every joy, sorrow and indifferent shrug is shared with a mass audience.

You might argue that life would be easier for the loners, misfits and borderline sociopaths that people The Smiths’ still-resonant songbook. I doubt it. Better to be properly alone than exposed to a million bullies on the latest social network. Heaven knows how miserable Morrissey’s oddballs would be now. The old eccentric’s autobiography may not be a classic. But the era it celebrates really does seem as remote as that of Jane Austen.

André Rieu: ‘I see a lot of jealousy around me’
8

Normal People nominated for four Emmy Awards in US
9