With all 80,000 tickets sold out in a day, this was a gig for fans who really wanted to be there 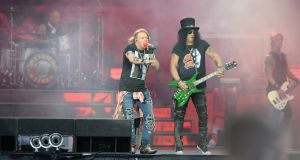 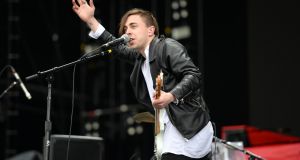 After a blissful week of scorching weather, Guns N’ Roses fans woke up to torrential rain across much of Leinster, leaving journalists nationwide to scramble for an array of ‘November Rain’ puns.

When the band arrived on stage, gradually the words to ‘Mr Brownstone’ came back to the crowd. Memories of drinking in a field with pals brought right up to the present, where 80,000 fans drank in a field with pals again, reliving one of the greatest rock bands ever, live and in the flesh.

Stories about Guns N’ Roses’ rock and roll excesses abound. Their recollection of their last gig in Slane 25 years ago might be more than a little hazy, but on the Not In This Lifetime Tour, the blurry eyes have long cleared. This was a show of clarity and energy where Axl Rose’s epic whining vocals and Slash’s phenomenal guitar playing snapped back into focus. Duff McKagan meanwhile was introduced as an fellow Irishman to the crowd, with a Prince love symbol on his guitar.

Tickets to the 80,000 capacity gig sold out in a day, meaning this was a gig for fans who really wanted to be there. The excitement and enthusiasm was infectious, with attention only diverting from the stage when the obligatory air guitars were broken out. 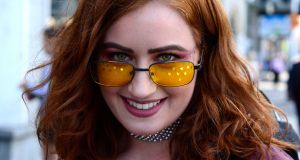 Back in Slane after 14 years. Last time I was here I was 18, after doing the Leaving and about to go to Wales for university. #slane pic.twitter.com/ReHd74e4M3

With torrential rain earlier in the day, and an older car-driving demographic attending the gig, there were complaints about huge traffic delays between Navan and Slane, with some fans deciding to walk the last few miles to make it to the concert. Fans were also searched multiple times heading into the gig, with increased security now part of the large live show landscape.

Otherkin well deserve all the backstage high fives available given the young Irish band’s excellent performance in the tricky opening slot. Despite being essentially at the genesis of their careers, and confronted with a just-arriving, sodden crowd, they commanded the stage like seasoned pros, loaded with energy and charisma.

A lacklustre performance from Mark Lanegan followed, and a decent one from Royal Blood, but it was all about the main act. But it wasn’t all about their own tunes, as one of the highlights of the Guns N Roses show came when the band covered ‘Black Hole Sun’ by Soundgarden, whose lead man Chris Cornell took his own life earlier this month, a shocking and tragic death.

With such a quick sell out, there was plenty of FOMO from those who couldn’t get tickets, but perhaps the person who missed the gig the most was Slane Castle owner Henry Mountcharles who was under doctor’s orders to skip the show due to suffering from a chest infection. “Shout out to Lord Henry!” Axl generously offered, before ‘Nighttrain’.

The last time Guns N’ Roses played, some of the band went fishing in the river behind the stage waiting for the ever tardy Axl Rose to get to the gig via helicopter from Dublin. This time there wasn’t such a delay, with the band getting on stage by 8pm. The biggest singalong was reserved for a note-perfect ‘Sweet Child O’ Mine’. Axl, who had multiple hat and leather jacket changes, also excelled on a grand piano playing ‘November Rain’.

“You’re in the jungle, Slane!” Axl yelled during ‘Welcome To The Jungle’. “Look at all you motherf*****s” were his later observations of the size of the crowd. Guns N’ Roses aren’t exactly ones for stage banter though, the music does the talking, and as ‘Paradise City’ rang around Slane, and Axl threw his mic into the crowd, that timeless music yet still very much of a time, and a memory, simply roared.