Glen Hansard: ‘I’m not setting out to be a master’

Now 45, the Frames frontman feels he is getting better at songwriting, and is happier ‘in my skin and in my songs’ – although he reckons he’s only halfway there on his own musical journey

Glen Hansard talks to Tony Clayton Lea about the origin of songs, not mastering the guitar and his left field musical tastes. Video: Enda O'Dowd 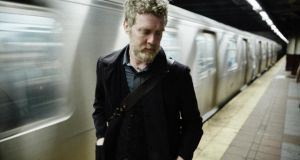 Glen Hansard: ‘When you meet a master, you know it. There’s a frequency coming off them, and whatever that high, sweet air is, when you come across it you feel different’

As usual, Glen Hansard is in thoughtful mode. With each passing year, his beard is more salt than pepper, and his hair is starting to swap red hues for grey, but at 45 he is coming into his own, as an artist and a person.

Sitting in the top-floor cafe in Dublin’s Tower Records, surrounded by music books and faux-Banksy wall-hangings, he is recalling the time more than 10 years ago when the Frames were in Ventry, Co Kerry, in the process of making their game-changing album For the Birds.

“We’d have long discussions about the songs and who owned them, so to speak. We agreed that for the album it was all about the songs, nothing else; they dictated everything we were doing, they’d let us know what music to surround them with,” he says.

“We felt that if we could remove ourselves, if we could allow the songs to take over, to connect – to have some resonance with the world – then there’d be some chance of them landing in or around fertile ears. Either that, or they would go right over people’s heads and not touch them. And that’s it, really: you have no say over what happens, but you can send them out with the right intentions and hope for the best.”

His instincts about whether the songs will score a direct hit are getting better, he says, although he is at pains to reference the old joke about making plans being God’s way of messing with your head.

“Every time you feel you’re somewhere, the world will give you a reason to disbelieve. There is no definitive place: we can never really reach happiness or completeness, but we pass through them. With this record I’m much more in my skin and in my songs than I may have been for a few records.”

Hansard’s journey to feeling comfortable in his own skin has been more entangled than most. More than 30 years ago, he was an artful dodger, a school mitcher most content busking in the streets of Dublin. By the time he was 20, the Frames were born, and so began a lengthy period of time when that band established itself as a totem of sorts, an often incendiary live presence and a staunch anti-major-label band, fronted by a passionate singer who dared to win (and also, as Hansard has said in the past, with a tendency “to snatch defeat from the jaws of victory”).

From the Frames came Once, the little gem of a movie that took on Hollywood and then Broadway. His next band, the Swell Season, was (and is) the Frames in a different guise, but it is Hansard’s solo work that is the most intriguing of all his creative output.

His 2012 solo debut, Rhythm and Repose, came across as an abstract expression of a frustrated, lovelorn frontman: fine songs were dosed with too many layers, too many textures, too much loneliness. His new album, Didn’t He Ramble, brings it all back home: it is simplistic, unambiguous, healthier.

All in all, Hansard’s path from artful dodger to artful songwriter is that of a person who is equally cursed and comforted by an artistic temperament: he is forever chasing something better within himself.

“In a lot of ways, the artist lives on the outskirts of experience, because they feel that’s where the good stuff is,” he says. “And so they go to where that is, even if it means missing out on certain comforts, certain levels of joy and simplicity. With songs, you have the freedom to scrap them, but knowing that things fit is the creative gold, and that’s where you get a bit depressed when it’s not coming together.

“In order for me to validate putting more records into the world under my name, I need them to be of use. The best compliment anyone can give you is that they want to listen to your songs. As a songwriter, that’s all you want; forget about the fame, the money and all of that. You’d give all of that up for someone genuinely saying to you that they connect with your music. That’s the nectar.”

And what about performing? It is, he says, the most essential part of what he does. A song, he says with a glint in his eyes, needs witness. “That’s when all the cogs work, when the songs come alive more than they ever can in a studio. I like playing the tunes, and I love woodshedding them, checking them out, seeing what they’re made of in front of people. Songs tend to be more of themselves in front of an audience than in rehearsal.”

A work in progress

Articulate, eloquent, Hansard has the same measure of himself as his art. “Life, happiness, satisfaction? It’s a work in progress. Where am I? Well, I’m 45, and I’m the middle of a really good life. If that’s me having perspective on where I am, then I’m in a good place. I feel that I’m getting better at songwriting, better at being a singer. I don’t want that to sound fey or humble, but I genuinely feel that.”

He tells an interesting story about craftsmanship, art and the meeting of a person he describes as a “master”. While on a recent trip to London, Hansard watched Mike Leigh’s 1993 film, Naked. He was so taken by it that the following day he visited three of the locations in the film and then did some promotional interviews in central London. After the interviews, not looking for anything in particular, he walked into a small homeware shop and considered what was on the shelves. He then glanced around him and happened to see Mike Leigh.

“I met a master of his craft that afternoon,” says Hansard. “And when you meet a master, you know it. There’s a frequency coming off them, and whatever that high, sweet air is, when you come across it you feel different. I was humbled, and he was very cool. We spoke for a few minutes, and then he left the shop.”

In terms of where he is in his life, Hansard says he would like to think that one day someone might come up to him and experience that “high, sweet air”. Not, he says, that this will happen any time soon.

“There isn’t a point where I’m ever reflecting on what or whereabouts my ‘art’ is,” he says. “I’m just in the middle of it. I’m not setting out to be a master. I’m just on the road, doing the work, not looking up too much.”

“There was always the saying in the Frames that whoever cared the most about the idea or the song got their way, and in the band I was referred to as Customs: everything was fine as long as it passed Customs. But I found the more I took control, the less comfortable we were as a band.

“My songwriting was probably only going 70 per cent of the way, because I knew that once the Frames touched it, I more or less had to leave it alone; I had to allow room for the lads to take songs and turn them into something I wouldn’t feel so attached to. If I’m set on something in a song, then I’m not for changing it. No matter how great the musicians are – and the people in the Frames are all great musicians – in a way my writing for the band was somehow less committed.”