Get out of the office: This week’s best rock and pop gigs 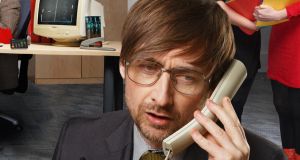 Neil Hannon of The Divine Comedy brings songs from his new album, Office Politics, along with old favourites, to Dublin, Belfast and Cork

JE NE SAIS QUOI #4
Secret Location, Cork
If you’re willing to sign your life over for 12 hours of house, techno, electro and fun in a secret location, Je Ne Sais Quoi #4 will provide exactly that. Tickets for this BYOB event include food and transport that takes you from Cork’s city centre and back again. So far, they have announced Shiv, Aoife O’ Neil, County Vinyl, AMR, DJ Gwada Mike and Padgj – some of Cork’s finest – on the line-up. Beds are not provided so remember to pack your stamina. LB

BILL CALLAHAN
Vicar Street, Dublin
American songwriter Bill Callahan is an acquired taste, but not so much that he can’t sell out venues such as Vicar Street. It wasn’t always that way, especially when you take into consideration his early years (when he was best known under the moniker of Smog) constituted little more than a headstrong approach to performing, writing, and broadly pioneering the lo-fi genre. That has changedwith his latest album, Shepherd in a Sheepskin Vest, regarded by Pitchfork as “his warmest, most generous, possibly his most profound”. Prepare to be impressed. TCL

ANN SCOTT
Whelan’s Upstairs, Dublin
What’s a struggling artist to do other than occasionally give a shout-out to their fans and supporters? Irish singer-songwriter Ann Scott is one such. Over the past 15 years, Scott has released smart albums such as Poor Horse (2004), We’re Smiling (2006), and Venus to the Sky (2013). She is currently working on new music, which is part of the reason for this full-band gig tonight in support of her recent Patreon venture. A helping hand would go a long way to buffering the burdens of an independently minded, perceptive solo artist. TCL

NITIN SAWHNEY
National Concert Hall, Dublin
A recipient of the Ivor Novello Lifetime Achievement Award 2017, London’s Nitin Sawhney is perhaps best known as a collaborator (Paul McCartney, Jeff Beck, Sinead O’Connor, Ellie Goulding) and composer for film, television and video games, but his solo work deserves serious attention. Indeed, Sawhney is something of a Renaissance guy – the man has fingers in so many figurative pies that it’s difficult to keep count. The best pick’n’mix concert of the year beckons. TCL

RICHARD HAWLEY
Olympia Theatre, Dublin
A firm favourite in Ireland, Richard Hawley has continually referenced his home city of Sheffield in his work. From his official debut album, 2001’s Late Night Final and others such as Lowedges, Coles Corner, Lady’s Bridge, Truelove’s Gutter, and Hollow Meadows, the man has dug deep into his roots while delivering mostly polished, delicately crafted songs. His new album, Further, continues this line of creative enquiry. A real pro with a liking for a well-shaped quip. Expect to really enjoy this one. TCL

IRELAND MUSIC WEEK
Various venues, Dublin Runs until Saturday 7th
It won’t take too long for people to forget about Hard Working Class Heroes, which is what Ireland Music Week was known as until last year. Yet the message and concept continue: to proudly display the broad range of Irish talent. Alongside the music showcases taking place in various city-centre venues are conferences, workshops, masterclasses, interviews, conversations and opinions – all from recognised industry experts. The event’s keynote interview will be with Rough Trade’s majordomo, Jeanette Lee. TCL

THE WINTER PASSING
Whelan’s Upstairs, Dublin
Interesting: an Irish indie rock group with one album (2015’s A Different Space of Mind) and one EP (2017’s Double Exposure) under the belt, but with the level of profile not in line with their experience. The quartet have been around for more than five years, and pivot around a cohesive, great-minds-think-alike approach steered in the main by sibling songwriter duo Kate and Rob Flynn. Worth your time and attention. TCL

LET’S HAVE A KIKI
Róisín Dubh, Galway
Taking over the upstairs space of the Róisín Dubh, Kiki St Clair of Galway’s leading drag collective Club GASS controls the decks for the night. The Queen of Galway will ensure that you hear wall-to-wall pop songs, camp hits and disco floorfillers. So as the Scissor Sisters instructed us, “lock the doors, lower the blinds, fire up the smoke machine and put on your heels cos we know exactly what you need”. LB

DISTRICT 8 & BODYTONIC PRESENT: DEBORAH DE LUCA
Jam Park, Dublin
Making her Irish debut, Deborah De Luca, one of the hardest working women in dance music, is coming to the Swords venue to play her fine fusion of hard and minimal techno. Running her own label, Sola_mente Records since 2013, the Italian DJ and producer is in high demand all over the world.  Support on the night comes from the Dublin-based Brazilian DJ Marc V, aka Marcelo Vinhas. LB

ARCANE X CYMATIC: TOBIAS SCHMIDT (LIVE)
Pharmacia, Limerick
The music scene in Limerick is a thing of wonder and with so many great musicians and DJs coming up with new ways to keep nightlife alive, the reintroduction of Arcane X Cymatic to the weekend slot is a major success. To mark the start of a new chapter for the party makers, they’ve roped in Scottish DJ Tobias Schmidt to do a live PA set. They also promise an exciting programme of “movers and shakers” to hold the fort every Saturday. LB

STRAWBERRIES LAUNCH NIGHT
The Sound House, Dublin
Strawberries is the new queer party in town and it’s brought to you by Stevie Faherty, one of the founders of the queer techno night Grace. With two local DJs in tow, they will play house, Italo and electro tunes. In future, they hope to do more genre-specific night but for this launch night, designer MJ Moan will create a playful installation that combines colour, light and structure to enhance the space. They plan to host this party every two months. LB

ALMA
The Academy, Dublin
Earlier this year, Finnish pop star Alma had to reschedule all of her European tour dates thanks to an overloaded diary. And now that she’s got her other work commitments sorted out, she can hit the road. If you had tickets for her March show, they are valid for this date and if you weren’t aware of her in March, you’ve got some time to play catch-up with the singer who weaves between the genres of chart pop, electro pop and R&B. A win-win situation. LB

THE DIVINE COMEDY
Bord Gais Energy Theatre, Dublin. Also Monday 7, Ulster Hall, Belfast; Tuesday 8, Opera House, Cork
For 30 years, Neil Hannon has been one of the most accomplished and sophisticated pop songwriters. Debut album Fanfare for the Comic Muse (1990), underwhelmed most people, but the remainder of his albums released that decade (Liberation, Promenade, Casanova, A Short Album About Love, Fin de Siècle) gave him numerous chart successes as well as a much broader profile. A blip of sorts occurred on his 2001 album, Regeneration, but every subsequent album has been one songwriting masterclass after another. In short? The man’s a flippin’ genius. TCL

The wise man, a short story by Donal Ryan
4