A selection of George Michael's biggest hits from his early days with Wham! to his successful solo career 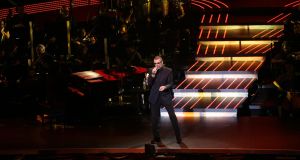 George Michael performing at the O2 in Dublin in November, 2011. Photograph: Cyril Byrne 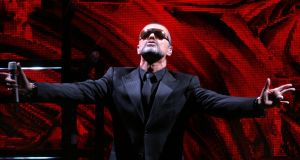 George Michael performing at the O2 in Dublin in November, 2011. Photograph: Cyril Byrne

How can we tell the singer from the song?

For every outstanding George Michael musical moment, there is a corollary headline in the tabloid press. The singing star, who launched his career with Wham! In the 1980s, but who was immeasurably better as a solo performer, died on Christmas day, aged just 53.

2016 continues to be the year of living dangerously for giants of the music world.

Michael passed away peacefully (the exact cause of death will remain unknown until after the post-mortem) and the tragedy here is that, after a number of years in semi-retirement, he was poised to re-enter the fray in 2017 with the release of a major documentary of his life, called “Freedom” and there were plans to record and tour again.

From a fake-tan boyband beginning, he did the near impossible by maturing into an acclaimed soul singer, selling over 100 million records and becoming one of the best-selling British selling artists of all time.

His picaresque life made him a tabloid favourite.

From sexual escapades to drug influenced incidents, he perhaps helped sell as many newspapers as he did records. But he was a man of robust good humour who wore his fame lightly.

At a press conference in London in 2011, to launch his “Symphonica” tour shortly after his release from prison for driving under the influence of drugs, I asked him about the “lifestyle changes” he was making. “Oh, that – it just means I’ve cut way back to just the seven or eight spliffs a day.”

It had been 25 spliffs a day he elaborated, by way of context.

He was born Georgios Kyriacos Panayiotou (his father was a Greek Cypriot restaurant owner) in London in 1963. He met Andrew Ridgeley at school and the pair formed Wham! in the early 1980s.

Ridiculed by music critics for their bouncy pop music and stunts such as shoving shuttlecocks down their tight shorts to “enhance their appeal”, Wham! were nevertheless a 1980s pop phenomenon on the same scale as Duran Duran and Culture Club. Their songs such as Wake Me Up Before You Go-Go and Careless Whisper were rarely off the radio.

But Michael was more in thrall to soul music than pop novelty. He always said that the highlight of his career was standing in a vocal booth in a recording studio beside his hero, Aretha Franklin, when they teamed up to record the I Knew You Were Waiting (For Me) single in 1987.

With a spectacular multi-octave voice and ambition and talent to burn, he had already released his first solo single – the haunting but little-known, A Different Corner, in 1986, even before Wham! Officially bowed out with a final concert at London’s Wembley Stadium.

His debut solo album, Faith, in 1987, transformed him into a global star – the whimsy of Wham! had been replaced with masterful ballads and funk-flecked rock n’ roll.

There were struggles though.

His quality control wasn’t always the best – the Listen Without Prejudice album from 1990 performed badly with its overwrought songs and Michael Jackson-lite lyrical matter. The singer did have a chip on his shoulder about his Wham! beginnings and the level of fame he was being exposed to at this stage was inimical to his longing for some semblance of a private life.

Michael’s sexuality was an open secret within the music industry, but it wasn’t until he was arrested for engaging in a “lewd act” in a public lavatory in Beverly Hills, California, that he talked about his homosexuality.

At the London press conference in 2011, he talked at some length about the attention focused on his sex life and became solemn as he said: “Every time I’ve made a mistake in my life I felt like I was letting down young gay people because they could see the homophobic abuse being thrown at me. I’ve inadvertently caused a lot of damage to gay people.”

After his vertiginous rise to the top of the musical pile in the 1980s and 1990s, Michael became a semi-reclusive figure over the last 16 years. There has been only one studio album in that time, 2004’s underwhelming “Patience”.

Concern was expressed by the amount of drug offences he was racking up (mostly, marijuana related). In 2010 he was given a custodial prison sentence and a five-year driving ban after admitting driving under the influence of drugs having crashed his car into a shop window late at night near his Hampstead home.

The singer talked openly about how traumatised he was by his first proper relationship with a Brazilian designer, Anselmo Feleppa. The two had fell in love in 1991 but six months later Feleppa discovered he was HIV positive and died two years later from a brain haemorrhage.

Michael, who had carried out the relationship in secret, was rocked to his very core by Feleppa’s death and later wrote the touching, Jesus to a Child, about his lover.

A colossal talent beset by private demons, the tragedy about his early passing is that in latter years George Michael was reaching new creative heights as a performer. His last tour – the Symphonica series of shows,which saw him doing orchestral rearrangements of his songs – was one of the best music shows of the last five years with his vocals being supple, emotive and wistful.

He sounded effortless and free.

The best way to remember him.