From the archive: Patrick Freyne writes a song for the Eurovision

In an attempt to bring Ireland back to its glory days, Patrick Freyne asks the experts how to write a Eurovision song and co-writes his own 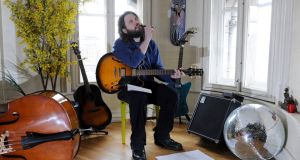 Shay Healy, who won in 1980 with What’s Another Year?, says: “Just write a good three-minute song. A good song is a good song.”

Healy is mentoring one of this year’s Eurosong writers so it’s all fresh in his mind. Brendan Graham is just passionate about song-writing.

Eurovision songs have changed over the years. In the early days, static, monochrome figures in tuxedos and ball gowns crooned melodies with minimal movement on bare stages. Some casual dance routines sidled in with Abba in the 1970s, but when Johnny Logan won with What’s Another Year? in 1980 the visual high point came when he got off the stool for the final verse.

“Dancing has entered into it in a big way,” sighs Healy. “To some extent it’s self-defeating to do a dance song unless you spend the money Europeans spend. We send Dustin and two hoofers and expect that to pass as a production number.”

However, the basic rules of Eurosong-writing stay the same. “You only have three minutes,” says Brendan Graham. “And it’s harder to say something in three than four and a half. You have to have something that hits the listener. You need to have an interesting title. You need to get into the hook quickly. You need melody and a storyline and some way of rounding it off. You have to stand out from 26 other songs.”

Winning themes
Listening to nearly six decades of winners, it’s clear that there are a number of recurring themes: references to flight, light, love, unity across nations, the process of singing, the notion that melody can positively affect geopolitics, not to mention the international language of Euro-gibberish (such as Sweden’s Diggiloo Diggiley from 1984).

Graham doesn’t think I should worry about the trends. “You need to be true to yourself. A good song, he says, is universal, but rooted in the personal. The Voice was inspired by a stroll in the mountains. The idea for Rock’n’Roll Kids was written on a ticket stub while watching ageing baby boomers grooving at a Fats Domino gig.

Shay Healy wrote What’s Another Year? after overhearing a conversation. “Two kids were chatting on the number eight bus and one said: `Sure, what’s another year?’ When I reached home I’d written all the verses. The song was effectively about watching my da living through the loss of my mother, but the universal sentiment of loss is understandable to anybody.”

This rootedness is why Graham and Healy’s songs are good. Some Eurovision stars aim too squarely for the generic and end up with broad cliche, such as the Olsen Brother’s 2000 winner Fly on the Wings of Love (“Fly baby fly,” they croon on the choruses, and they’re not singing about an aeronautical infant).

After meeting Brendan Graham, I send him some of my old songs, to which he responded honestly, “verses too long, hooks not well defined”.

Big pop choruses are everything in Eurovision and you can’t repeat them enough. Graham incants Hank Williams’s mantra: “Start with the hook and keep repeating it.”

Shay Healy passes on another tip: “Write a verse and a chorus, then f*** away the verse and make the chorus the verse, and write a chorus for the chorus."

Graham starts the songwriting process by writing his idea in the middle of a page before scribbling all related words, themes and ideas.

“It’ll be a mess of squiggles and connected lines, words here, bits of rhymes - total chaos. Sometimes I write a four-line synopsis. It’s almost like a cartoon animation. If you kept turning the pages of my workbook you’d see a physical shape coming on the song over time.”

He’s a good teacher, so he gets me to do this there and then in the cafe we’re sitting in. Once you have something with verses and choruses, says Graham, your job is only beginning.

“I’ll sing and re-sing a new song to myself and the sheep that live near us,” he says. “Those poor sheep are all crazy because I’ll be bawling my head off, but I do that for a reason. I’m conscious that the words have to fit in the singer’s mouth well and don’t feel clumsy and awkward.”

Shay Healy has a different solution to the same problem: “When you’re finished writing your song, pick an unlikely neighbour and say 'Do you think you’d be able to learn this song?’ And if they can, you may be on to something."

How I wrote my Eurosong
I break the first rule of writing a Eurosong by aiming squarely at Eurovision.

Initially, I try writing using the universal language of pop-gibberish, specifically influenced by Teach-In’s Ding-A-Dong, which won in 1975, the year I was born (it features the line: “when you walk along with your ding-dang-dong"). My plagiaristic attempt, Dingin and a Dongin, sounds awful but I keep a reference to it in my final chorus.

For a while, I toy with writing a list song like All Kinds of Everything, listing Euro-luminaries of times past. But I can’t get it to rhyme (I leave in references to my very patient mentors).

Eventually I resort to a recurring Euro-theme: uniting the world in song, like Dave Benton and Tanel Padar’s 2001 win for Estonia, Everybody: “Come on everybody and sing along and feel the power of a song.” This roots my song in personal experience (trying to write a song) and the more general notion of world harmony. My verses track a humble musician trying to write a melody to unite the world. Then he does just that with an awesome chorus.

But I don’t have an awesome chorus.

“How about nah nah nah nah nah nah nah my world’ or something,” sings my friend Mark Palmer. His tune is far better than anything I’d come up with (and I had really tried), so I add it to the song along with a few lines about “a better world!”. Brendan Graham stressed the need for the “verse to set up the hook”, so I write a bridge. (“Your bridge sounds a bit like Wonderful Tonight,” warns bass-playing Irish Times writer Laurence Mackin, so I change a few chords).

Anticipating a big production number, I also include a reference to dance (“a bumping and a grinding”) and a dramatic key change for when I rise from the piano stool and angel wings spring from my back.

Lyrically, it doesn’t quite hang together. How does the timid songwriter of the verses become the triumphant metaphorical “bell” of the chorus? Why is he talking about “a land” in one part of the song but “the world” in another? What does “songing” mean? It’s all a bit mysterious. Also, for the record, Brendan Graham did not say “Sing! You’ve got no choice!” as I suggested in this song. Nor did Shay Healy implore me to “Go forth and sing! Have no fear!” Nobody was that eager for me to do this.

My deadline looms, so in just three hours my long-suffering producer friend Les Keye records the song with contributions from Mark, Laurence and my wife, Anna Carey. I call the song The Bells of Europe. I call the band The Belles of Europe.

When we meet, Graham, who also wrote the hugely successful Josh Groban hit You Raise Me Up, tells me that every songwriter needs “a pension song” to see them through their old age.