From AC/DC to Americana: The Answer climb towards a new horizon

It’s a long way to the top if you wanna rock and roll – and Northern Irish band The Answer are ready to scale the heights, singer Cormac Neeson tells Ronan McGreevy 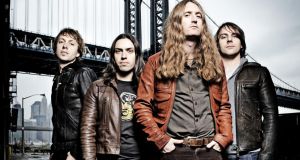 New Horizon is your fourth album. How do you feel about this new record?
We feel the same way that we feel like the first three at this stage. We’re excited, nervous and ready to get going to go on the road and take the songs on tour. There is a very nice kind of anticipation in the band at the moment with a lot of nervous energy kicking around the rehearsal space for sure.


How would you compare New Horizon to your previous records?
I would probably say that this record is closer to (second album) Everyday Demons . We kept it very raw, very alive and intense from start to finish. There is a clarity that runs through this album as an overall statement. That clarity and strength of vision is most acute on this record and more so than our first three.


Why do so many bands get worse with each record when the opposite should be the case?
Most bands don’t get better. I have no idea why this is the case. Maybe they are disillusioned or they get too much money. From our point of view, I hope that fans appreciate our album more and more, because I think we are getting better with each record. We have always been a band to challenge ourselves to better our last work. We have never got complacent. We’re always trying to improve as musicians and as songwriters.


Your first album, Rise, came out in 2006. Seven years down the road, have thinks turned out the way you expected?
To be honest, we didn’t know what to expect from the outset. There are so many factors beyond a musician’s control. Our attitude has been to do what we do and do it well and see where it takes us and get a few breaks along the way that have brought us a few notches up the ladder.

Getting a record deal in the first place was sacred ground as a young band. On a much broader scale, getting a support slot on the AC/DC world tour was a big help for us.


Does your support slot with AC/DC in 2009 and 2010 still resonate with your fans?
They are such an all-encompassing band. They are one of the greatest rock and roll bands there has ever been. A lot of our fan base are massive fans of AC/DC. Our audiences take a lot of pride that we survived a year and a half on the road with those guys.

They have got to the stage that they have nothing really left to prove other than they can still get out there and do it. Their hunger is still as great as it ever was. I like to think that a few years down the line we’ll have a similar attitude to what we do.


Ireland is a bit of a cold house for Irish hard rock bands. Where are your biggest markets abroad?
There is a few territories in Europe that appreciate a good hard rock band. We have played almost as many gigs in Germany as we have in the UK and Ireland combined. Especially off the back of the AC/DC tour, we picked up a lot of new fans in places such as Spain and Italy. I find that the further south you go, the crazier the crowds, for whatever reason. It must be all the sunshine. Japan has been very good to us over the years.

You have a very rootsy kind of a sound grounded in Americana. How has the United States been for you?
We played to more than a million fans in the United States on the AC/DC tour. Our aim with this record is to follow up on any ground we have made over there. We are going to New York to support the record. The intention is to get over there and tour next year. We are very optimistic about our chances in the United States. We’re hopeful our sound will strike a chord with audiences over there. There is so many rock stations over there dedicated to playing good rock and roll.


The North would seem to be a better environment for your style of music.
It’s a bit grittier alright. There has been an explosion of music in the North over the last 10 to 15 years. More and more bars have been able to stay open and offer young bands venues to play.

We are really starting to see the benefits of that. We are very proud to have emerged from the Belfast circuit where we cut our teeth as a band.


How is the music industry for guys like yourself. Is it tough to make a living? It’s tough for any musician who is not selling out stadiums. It is tough to get by, but we do get by. We can only see things moving onwards and upwards on the back of this record, so we can use it as a platform to make that next step. We’re making a living making music and that’s what makes us happy. Bon Scott wasn’t lying when he said it’s a long way to the top if you want to rock and roll.

New Horizon is out now.

A Winged Victory for the Sullen: ‘There is anxiety all over the world’
8

Why does the heart want what it wants? Desire at Imma
9