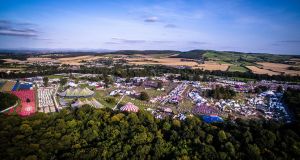 The Electric Picnic has announced a new section, a festival parade and details for its Mindfield events ahead of the September festival.

New to Stradbally this year is Hazel Wood, a new art and performance area that will feature theatre, puppetry, workshops and visual art. French company Footsbarn Theatre will be performing, along with a team from the Gaiety School of Acting in the tree-lined paths around the main arena. And a Cerebral Fortress will also be asking festivalgoers to “tap into an immersive and augmented reality in your own psyche”.

Cathy Davey will debut her new album at Electric Picnic, with its first live performance at midnight on the Friday night of the festival. There will also be chamber music from the Melting Pot ensemble, mask-making workshops and installations by Irish artists Tessa Quinn, Sandra Daveron and Jodi Coyne. Generic People will install a multimedia display in the trees to complement performances from Jack O’Rourke, Exit Pursued By a Bear, Carried By Waves, MKAI, Jim X Comet with a David Bowie Tribute set, Fish Go Deep, Home Beat’s Emmet Condon and more, along with We Lived in Cities, an audiovisual orchestral project that was in last year’s Tiger Dublin Fringe.

The Hazel Wood team will also lead a procession across the festival site on Sunday night, ending in a wrap party with the Yurodny Ensemble.

The Mindfield section has also announced details of its offering. The Leviathan Political Cabaret will feature daily broadcasts from the Waterford Whispers News crew. A Twenty One Sixteen Parliament will be chaired by Blindboy Boatclub of the Rubberbandits, who will also present a panel called What the F**k is Culture Anyway?

A live Soundings podcast will be hosted by Sharon Horgan, Dylan Haskins and Aisling Bea, while Miriam O’Callaghan and Al Porter will host a Sunday brunch chat show.

The History Ireland Hedge School will look at the Battle of the Somme and the history of festivals, while The Experts Bite Back will fact-check claims by politicians and the media on recent controversial issues. Amnesty Hour will look at the new global plan for refugees, with Audrey Carville, Ghias Aljundi, Rhazan Ibraheem and Colm O’Gorman.

Dublin Theatre Festival will present a number of works including Love and War: Words and Music from the Western Front, Always Alone Together, From Eden, Rebel Rebel by Anu Productions, and 16 and Rising by Super Paua.

Science Gallery will be transplanting part of its exhibitions to Stradbally, including its Seeing and Future States shows. An Puball Gaeilge will feature Tara Mooney, Na Gaibairí’s take on rap, the Word up Collective, Anti One’s hip hop show, Tebi Rex, and Tura Arutura, a Zimbabwean who mixes his native singing and dancing with Irish, song and sean nós dancing. Google Gaeilge Karoke hopes to create a new genre, with 1980s pop songs and help from an online translation tool.