Duels and duets: it’s the Donizetti effect in Wexford 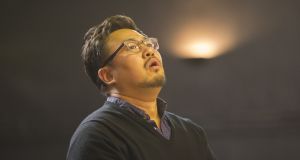 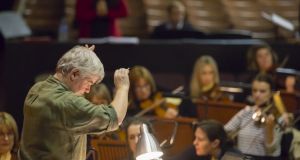 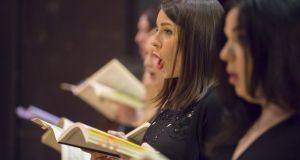 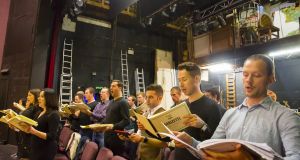 Members of the chorus in rehearsal for Maria de Rudenz by Gaetano Donizetti, part of the 65th Wexford Festival Opera running from 26 October to 6 November. www.wexfordopera.com Photo Patrick Browne 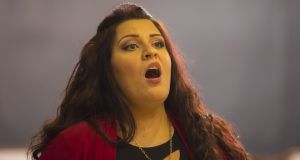 How do you strangle a baritone? In the cafe of the National Opera House in Wexford, detailed instructions as to how to do exactly that are being issued as Pietro di Blanco and Michele Patti rehearse their roles for this year’s production of Gaetano Donizetti’s Il campanello.

“Not that way, this way,” advises director Roberto Recchia, springing up to demonstrate. Hands are adjusted around throat and the singers begin the scene again.

Every autumn the National Opera House on High Street becomes something of an opera factory, opening six new productions over four days. Wexford Festival Opera has arguably been something of a Donizetti factory as well. His works have been the most frequently performed since the festival began in 1952. The two on this year’s menu brings the total number of Donizetti operas staged at Wexford to 17, more than at any other opera festival in the world apart from in the composer’s birthplace of Bergamo in northeastern Italy.

“He had a miserable life; there were losses in his family, periods when he was unemployed, he suffered very much with illness. But he never loses his smile. At the same time he always puts something melancholic in the comic operas. So this very subtle balance between the comic and the serious is always there, from the first opera to the last.”

Donizetti is said to have completed Il campanello in eight days, borrowing chunks of his own “greatest hits” and employing a plot straight out of classic farce central casting. An elderly pharmacist marries a young girl, only for her ex-boyfriend to disrupt the wedding night by repeatedly ringing the doorbell, demanding ever-more-ludicrous prescriptions which the hapless pharmacist is, according to the laws of 19th century Naples, legally obliged to provide.

By the time the ex-boyfriend – played by baritone Michele Patti – turns up in the guise of an opera singer who has lost his voice, Don Annibale is really starting to lose his rag. Hence the spectacle of bass Pietro di Blanco with his hands around his colleague’s throat.

“The timing in Donizetti’s musical dramaturgy is absolutely perfect,” Recchia says. “The action has to match . . . but to the audience, it must appear absolutely natural. What I try to transmit to my singers is that they must never think they’re doing a comic opera. The characters don’t know they are comic. So they must be played in a serious way. The comedy must spring from the situation.”

Downstairs in the lobby, soprano Gilda Fiume, who is singing the title role in Maria de Rudenz, explains that for a singer the challenges of Donizetti are both vocal and theatrical.

“Donizetti writes in a way that helps the singer to show all of his or her abilities,” she says in her flood of silvery Italian, translated by company manager Giuliano Guernieri. “So you must have all the voices – coloratura, bel canto, everything – and you must go smoothly from one to the other. The other difficulty is the interpretation.”

Maria de Rudenz is a darkly Gothic tale of a woman seduced by a bounder who not only abandons her, but proceeds to marry her cousin. Fiume, who made her debut in the equally dark but much better-known Lucia di Lammermoor, says the women are very different characters: Lucia actually goes mad, whereas Maria has more of a revenge thing going on.

“Unlike Lucia she’s always lucid. She’s angry. She kills her cousin Mathilde and she kills herself – so the war inside her is a big, big battle.”

Does Fiume think Maria de Rudenz, which Wexford has rescued from the dark regions of operatic outer space, should be performed more often?

“Absolutely, yes. Musically it’s one of the most beautiful of his operas. It’s sublime. The problem is that the plot is a little . . . cruel.”

Once again two singers are squaring up to each other, but this time it’s serious: the swords are out. Under the guidance of Maria de Rudenz’s assistant director Riccardo Olivier, tenor Jesus Garcia and baritone Joo Wan Kang are mapping out a duet which is also a duel.

Not that way; this way. They step forward, back, to the side. There are suggestions, discussions, more suggestions. So meticulous are the details that we might be watching a martial arts movie in the making. Closer, urges Olivier. Garcia lays the sword along the side of Kang’s neck and steps in. Too many steps. He bounces backwards.

After about 20 minutes, without warning, the piano suddenly sweeps into top gear. Instinctively the singers follow, letting rip with the music. And for a few glorious seconds we’re given a tiny glimpse of what the finished three-act piece will be. Intricate interweaving of voices, lilting accompaniment; it’s the Donizetti effect in full flow, and it’s pretty impressive. Better yet, no baritones – or even tenors – were killed in the making of these productions.

During his career Gaetano Donizetti composed about 70 operas. The vagueness of that total is due to recyclings, revisions and reboots, which were common at the time, but it is still pretty staggering.

Of the 17 Donizettis which have been staged at Wexford Festival Opera most are, in line with the festival’s artistic credo, neglected or forgotten works. But opera fashions change. In 1952, when the first festival presented the now-popular comedy L’elisir d’amore, it was hardly ever performed outside Italy.

Subsequent years saw productions of Don Pasquale, La figlia del reggimento, Anna Bolena, Lucia di Lammermoor and Lucrezia Borgia, all of which are now in the standard repertoire. However, many of the other Wexford “discoveries” – Parisina, Linda di Chamounix, Gianni di Parigi – are still languishing in the doldrums.

When it was performed in 1991, directed by Francesca Zambello with Irish mezzo Alison Browner, L’assedio di Calais (The Siege of Calais) was hailed as one of the most successful operas in Wexford’s history, but it has received only a handful of performances in the UK since.

Why does that happen? Director Roberto Recchia is philosophical. “Sometimes operas were kissed by the gods of art and sometimes not,” he says. “I know that a lot of people don’t like Donizetti and in Italy they used to call him Dozzinetti, which is when you buy something by the dozen, when something is not very refined.

“The original scores have been restored. Now we know that what we heard until then was not the real Donizetti. So it’s stupid to think that Donizetti is not a great composer. He is for me, for sure.”

Right, then. That’s 17 down, 50-plus to go? “This is a never-ending love between Wexford and Donizetti,” Recchia says. “And I think there are a lot of gems still to be discovered.”