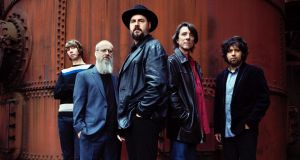 “These are crazy times the world over,” says Drive By Truckers’ singer and songwriter Patterson Hood, “and especially right now in America. I’ve always considered us a political band, but it has usually been more of a subtext, under the surface. I guess the times have called for a more direct approach.”

Harsh times, strong words, provocative art – Drive By Truckers have been here before but not with such force. Formed in Athens, Georgia, just over 20 years ago by friends Hood and Mike Cooley, the band has always displayed socio-political leanings, but last year’s impassioned protest album, American Band, brings those tendencies centre stage.

Early albums such as Gangstabilly (1998), Pizza Deliverance (1999), Southern Rock Opera (2001) and Decoration Day (2003) caught the band in a state of creative flux, as they swayed between alt.country and aggressive hard rock.

The band’s often pointed lyrical content was also evolving, which for the most part was written by Hood and Cooley (and for a few years, by now departed member, Jason Isbell).

Veering between conceptual projects (Southern Rock Opera told the story of US band Lynyrd Skynyrd, refracted through songs about political and racial issues) and strong narrative strands (Decoration Day evokes sombre tales of desperate people), the band consciously set out to highlight the differences between societal rights and wrongs. Latest album, American Band, brings it all together.

“When I wrote What It Means, the first song I had for what eventually became American Band, it was the fall of 2014,” says Hood. “We were then touring behind a new record, English Oceans, and were planning on a hiatus afterward, so I wasn’t really thinking in terms of writing for a new record.”

Socio-political events, however, spurred Hood into writing mode. Absorbed by the news of Trayvon Martin’s murder in Sanford, Florida (February 2012), and the killing by a police officer of Michael Brown in Ferguson, Missouri (August, 2014), Hood says he wrote lyric notes simply to make personal sense of the events.

“I figured I would record What It Means on my phone, with my acoustic guitar, throw it up on the internet, and be done with it. I was honestly naive enough to think that the lyric content would be obsolete by the time we made another record. Unfortunately, the damned song is more timely now than ever. Unfortunately, they all are.”

When Hood first played What It Means for the band, Mike Cooley responded by playing one of his new songs, Ramon Casiano, which highlights the long forgotten story of the killing, in 1931, of a Hispanic teenager by Harlon Carter, a former leader of the National Rifle Association.

“That’s when we realised where we were headed. Soon we decided that if we were going to do this kind of album, we should get it done sooner than later, so we could release it before the 2016 election. We recorded American Band in six days because we wanted it to have that kind of immediacy.”

How does Hood feel about it now, given the current political and social background of America? “Angry and defiant. I think this shit has awoken a sleeping giant in our country. I’m just hoping we can take our country back before those crazy people destroy everything good that we’ve fought for over the last 75 years. It’s like giving your teenage boy the keys to a Trans Am without any driver’s lessons, and him seeing how fast he can drive it on a windy road.”

For creative figures such as Hood, the significance of crafting art to highlight what needs to be said comes naturally. It’s always important, he says, “and even more so now than at any point since Vietnam”.

He admits to not being under any illusions about music changing the world, but is adamant that it can provide a crucial backdrop for change.

“When Dr Martin Luther King began his Civil Rights work, one of the first things he did was enlist the Staple Singers to bring music to the struggle. Their music became a very important part of his work – one that is sometimes overlooked. If our music can provide some comfort and release, a moment of clarity in a foggy night or catharsis from the pain, then we’re doing our job. I’m very proud to be a part of what we’re doing.”

Drive By Truckers have always been a grassroots band – as they have toured around the US since last November’s election result, does Hood get a sense of the mood? And what does that sense tell him?

“People are angrier and more frightened than I’ve ever seen them. When we released it last September, we all really thought that American Band was such a snapshot of a moment in time that it would be a little dated and obsolete after the election.

“That hasn’t been the case at all, unfortunately. I think the show, and the response from crowds since the election, has been far more intense and cathartic than it has ever been. There’s nothing reasonable about what’s happening in America right now. Sometimes you have to draw a line in the sand and stick to your ideals.”

“It’s a pretty provocative question, isn’t it? I mean, he won the election by the laws and rules of our country, as far as we can so far prove. He is, therefore, the president. He in no way reflects my values or views, however. I’ve been on the losing side of more than half of the elections of my life, but this is very different. George W Bush was a president that I opposed on most issues, and over two terms he did extensive damage to our country on so many levels, but I still considered him the president. What we have now is a totally different level of corruption and strife. I am truly scared for our country and my children’s future from the things Trump is saying and doing.”