David Bowie’s secret gig at the Factory, Ringsend in May 1997 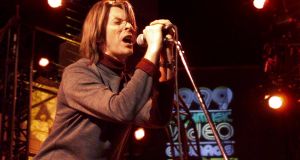 In 1997, David Bowie was in Dublin rehearsing for the Earthling tour when he played a secret gig for 300 people. Photograph: Reuters/Andy Clark/Files

It was Ireland in May 1997, and 300-odd people (some of them very odd) were stuffed into the rehearsal room at the Factory. David Bowie was in Dublin rehearsing his new band for the Earthling tour, after a recommendation from Goldie, who told him he should come over and check out the city’s drum-and-bass culture.

“I spent two weeks hanging out with him, going down to the Factory and talking about music, drum and bass,” says Brian Spollen of MCD Productions, who organised the gig. “At night I took him out to our club nights in the Globe, the Kitchen, Andrew’s Lane Theatre, and no one bothered him. People would come up and say ‘Howayeh’, but that was it.

“Then, out of the blue, he asks me to put on a party for him, and he said, ‘I want it to be the kids that go to your clubs.’ You could only buy a ticket the night before at our club in the Kitchen, and then you had to ring on Saturday to get the venue details.

“There were two other rooms with DJs,” Spollen says, “because he wanted a club vibe, but nobody gave a shit – everyone just wanted to see David Bowie.”

With a low, makeshift stage, nothing was between us and our idol but a few microphones and monitors. The group – which included a first sighting of the brilliant bassist Gail Ann Dorsey, who would be a fixture in Bowie’s band for the next 20 years – stormed through a set of new drum-and-bass-influenced material.

There was a fervent hope that he would visit his back catalogue. And the Thin White Duke didn’t disappoint. The second set was pure Bowie gold, with revamped versions of ‘Fashion’, ‘Heroes’, ‘Scary Monsters’, ‘The Man Who Sold the World’, ‘All the Young Dudes’, ‘The Jean Genie’ and a dozen more. It was so loud there was plaster falling from the ceiling.

Later, people said it could be heard a mile away, and it seemed to go on forever. I remember frantic gesticulation from manager types at the side of the stage telling Bowie to finish, but he seemed oblivious. Even Iman, who appeared at the back of the stage pointing at her watch, couldn’t tear him off. The setlist ran to 30-odd tunes.

“To be honest, I didn’t see that much of it because I was dealing with an ever-increasing stream of guards and fire officers,” says Spollen. “But I do remember that at about five in the morning I was standing in the corridor. We’d had a guard, a sergeant, then more guards, all going ‘What the f**k is going on?’ until eventually a superintendent from Irishtown turns up, and his exact words were: ‘Brian, I don’t know what the f**k is going on here, whether it was legal or illegal, but people are ringing their TDs to get them out of bed, and I need to know the facts.’

“So I start explaining: it’s just a private party, there’s no drink for sale. And as I’m saying this, Bowie, Iman, Joe Elliott and Eddie Irvine come walking down the corridor. Bowie stops and hugs me, says, ‘Thank you, Brian: amazing party, you did brilliant’, and Iman kisses me, and then they all drift out in their celebtastic way.

“So the copper looks at me and goes, ‘Well, I know who he is,’ and he puts his notebook back in his pocket.”

Yungblud: ‘My generation is over being divided’
4

Saving the State: intimate if flattering inside story of Fine Gael
8