Cream of festivals with Neneh Cherry on top: The week’s best rock and pop gigs 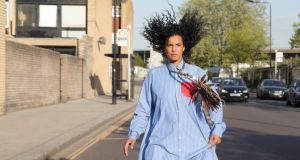 Racing over from his support slot at Orbital’s Galway International Arts Festival gig in the Heineken Big Top, electronic musician Daithí will keep the momentum going with this late-night gig in the Róisín. It’s set to be a busy night, with Orbital fans, Booka Shade fans (Monroe’s) and GIAF pundits all gasping for a pint in the city, so it’s advised that you book a ticket in advance for this one. It’s just a tenner, and consider it a tenner well spent because Daithí is known to deliver the craic. LB

Now in its fifth year, Vinyl & Wine is one of those highly agreeable ad hoc intimate events that take classic rock/pop albums, play them on hi-fi vinyl-playing equipment that we’d never be able to afford, and then discuss their merits with a panel of experts and enthusiasts. The event has found a new home in Dublin’s newest music venue, Lost Lane, and its debut outing here hosts the playing, in its entirety, of Nirvana’s Unplugged in New York, which celebrates its 25th birthday this year. TCL

Former child actor, one-time insomniac, an unwilling participant in estranged relationships – US songwriter Jenny Lewis has been through the wringer, but her pain is our listening pleasure. Lewis’s most recent album, On the Line, details various emotional upsets that she surrounds with a batch of supremely catchy pop/rock tunes. And yet, one has to ask: why is such a good and commercially attuned songwriter playing such a small venue? Life ain’t fair, for sure – it’s a heartbreaker. Special guests are Irish group Slow Moving Clouds. TCL

He might be England’s answer to Bruce Springsteen or Pete Seeger, a songwriter that came of age during punk rock’s more political phase, yet has long since embraced the power of song in whatever musical shape in order to get his points across. From then to now, Billy Bragg has persistently been involved with grassroots politics and associated activism. As expected, all three shows sold out within hours of being announced: expect hot and sweaty summer-in-the-city performances from a passionate, insightful musician. TCL

The voice will blow you away. The humility will inform and inspire you. After quite a few years, Canadian singer and songwriter kd lang returns to Ireland with her Ingenue Redux show, which sees the singer perform in its entirety the 1992 album that carried her across from cult status to mainstream. The album, lang’s fifth (and her second as a solo artist) veered away from the country music stylings of her previous work, presenting songs that (as Uncut magazine remarked) are “luminous, languid and seductive to the point of intoxication”. No surprise that both shows are sold out. TCL

One of the best lesser-spotted superb Irish bands around is I Have a Tribe, an elegant vehicle for the songwriting skills of Patrick O’Laoghaire. The last time we caught him live was at an Other Voices/Imro solo gig last December in Dingle when he silenced the room with songs old and new. This gig, which features a five-piece band, is a forerunner not only to numerous summer shows (including All Together Now, Kilkenny Arts and Another Love Story) but also to the release of IHAT’s forthcoming album. Expect a big bag of new songs performed in a way that is unique to this most expressive of songwriters. TCL

Join Squarehead, Paddy Hanna, Junior Brother, Autre Monde, Anna Mullarkey, Sinéad White and a host of others to celebrate the 15th edition of Strange Brew Records’ summer knees-up. If that’s not enough to lure you in, the first 150 people to buy tickets (€5/€10) will get an enamel pin of the Shindig logo, which was designed by Squarehead’s Ruan Van Vliet, and a free drink. Grand. It starts at 8 and runs until very late – expect a few surprises on the night. LB

Established beyond doubt as the best medium-sized summer music festival, Indiependence really found its footing about five years ago, and since then its capacity has grown year-on-year. It is a young music fan’s event (we would guesstimate, primarily, from between 18 and mid/late-20s) and so doesn’t have the broader, more refined range of attractions that the likes of Electric Picnic, Body & Soul, and All Together Now has. This said, having been to this festival for the past five years, we can say that it rocks solidly with notable headline acts (Bastille, Gavin James, Catfish and the Bottlemen, Biffy Clyro), a robust line-up of established bands (including The Undertones, All Tvvins, Lewis Capaldi), soon-to-be-headline acts (including Wild Youth, Le Boom, Fangclub, Otherkin) and very fine emerging ones (including Inhaler, Laoise, PowPig, Thanks Brother). TCL

The second iteration of All Together Now is both tribute to and celebration of its founder, John Reynolds, who died heartbreakingly young last year. This event, like last year’s first edition, sold out many months ago and is clearly in it for the long haul. The line-up is stellar left-of-centre yet clearly on-point for more than just the casual music fan: The National, Patti Smith, Fontaines DC, John Grant, Pussy Riot, Olafur Arnalds, Anna Calvi, Jon Hopkins, Loyle Carner, Soak, Neneh Cherry and Lisa Hannigan may be a selection of the readily identifiable names, but across the weekend are rakes of other music acts and DJs, as well as spoken word, theatre, discussions, interviews, readings, food, wellbeing and comedy. Strictly over 21s (although children under 12 can attend free of charge, provided they’re accompanied by a parent with a family ticket). TCL

Beatyard is one of those rare city-based events that aim to be all things to all people and hits the target – adults, families, kids, and all points in-between benefit from the level of eclectic and sure-footed attractions on offer. Music-wise, it veers towards the inordinately cool: DJ sets from Todd Terje, Mount Kimbie and New Jackson, and performances from Groove Armada, Chvrches, Jafaris, Erica Cody, Soulé and (when New Jackson packs up his kit) David Kitt. Equally, there is a good daytime programme for children, as well as afternoon boat parties on each day for the salty dogs in the audience. For after-party info see the separate panel, Saturday. TCL

If you’re in need of some dirty techno and deep house¨, then the Wired Deep lads can tend to your every whim. The Cork collective, founded and made up of Joe Logue, Dan O’Sullivan and Steven Forde, should be a nice distraction if you don’t make it to the other, very sold-out events happening around the country this weekend. Why go to a field for techno and be left vulnerable to the outdoor elements when techno can come to you in the safe confines of a club? LB

Has this tribute show ever been staged in Ireland before? We think not, and (if we are correct) it’s a surprise that it hasn’t. Dublin’s Peter Byrne channels Neil Diamond – now retired from touring, if not live performances, due to Parkinson’s Disease – as he recreates the American singer’s celebrated 1972 live album (effectively, a Greatest Hits package). With a 30-piece orchestra providing musical accompaniment, Byrne delivers enduring Diamond pop classics such as Sweet Caroline, Red Red Wine, Play Me, Song Sung Blue, Cracklin’ Rosie, and I Am… I Said. Get ready to wave those arms! TCL

Beatyard has all the live music you could wish for on solid concrete ground, but if you’re looking for post-festival destination, there’s a number of official happening parties happening close to the site and in town. From 11pm until closing time, Wigwam will be hosting Leon Vynehall and DJ Yoda on Saturday night and Krystal Klear on Sunday, while Monkstown’s Purty Kitchen will also host events on both nights, with electronic DJ A Skillz confirmed for Saturday. LB

As part of Cork Pride, which runs from July 27th until August 4th across the city, Dublin’s Mother DJs are packing their bags and heading south to bring some added disco and electro music to the celebrations.  The Cork Pride Parade is happening the next day at 1pm so you have two choices: be sensible and go home early or, if you still have glitter and sequins on from the night before, leave them on and keep the party going from the club out onto the streets. LB

ONE TILL ONE
Connolly’s of Leap, Co Cork http://connollysofleap.com/event/one-till-one/

If the title wasn’t any indication, this bank holiday the gang in Connolly’s are going for 12 hours straight. Tunes will be courtesy of Greg, Shane and Colm from Fish Go Deep, who will roll out some daycent house, disco and techno delights, and the special guest comes in the shape of Padraic Disconaut, who comes all the way from Galway. With a newly refurbished kitchen and pizza oven in the venue, food will be available on site all day. LB