Classical Music: The odd imbalance of ‘Ten Thousand Miles Away’, and the place of period performance 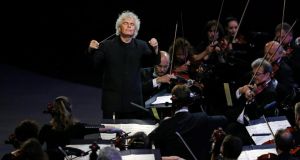 It seemed like a great idea for the Royal Irish Academy of Music to devise an event called Ten Thousand Miles Away and use it to explore “the special relationship between the US and Ireland”.

The 65-minute staged concert involved students from the academy and the Juilliard School, in New York. It was directed by Conor Hanratty and devised by Iain Burnside, a Scotsman who is the academy’s visiting international artist.

The programme received three performances at the Lir, in Dublin, last weekend, and, courtesy of a €3,500 grant from Culture Ireland, there will be further performances in New York, including a sampling of the musical offerings at the Ireland-US Council’s $400-per-head St Patrick’s Lunch.

What I’m wondering is what on earth Burnside thought he was up to. He says the programme was “a heaven-sent opportunity to look at national identity, real or imagined”, and he devised it to “explore ideas of emigration, of assimilation, of landscape”.

He included 20 musical numbers, finding space for some century-old arrangements by the Belfast man Herbert Hughes and a single contemporary one, by the pianist Michael McHale. But he entirely left out original work by Irish composers, living or dead.

That said, under the guidance of Burnside and Hanratty, the performers – the singers Rebecca Rodgers, Angela Vallone, Avery Amereau, Andrew Gavin, Miles Mykkanen and Peter Manning, the pianists Dearbhla Máire Collins and William Kelley, and the actors Sam Lilja and Rachel O’Byrne – put on a good show.

It was my first time in the Lir’s smaller upstairs studio, and the singers adapted easily and persuasively to the intimate scale. Vocally, the honours went Stateside, to Avery Amereau, a full and fruity mezzo soprano, and to Angela Vallone, a soprano who knows how to draw her listeners into a world of quiet raptness.

The demonstrativeness of the Juilliard-trained pianist William Kelley was less supportive of the singers than the more restrained Dearbhla Máire Collins. And the actors Lilja and O’Byrne communicated vividly, animated by very different spirits.

Usually when words and music mix it’s the music that dominates. On this occasion it was the words. And the very best was left until just before the end, when Lilja blended calm and deep regret in Yeats’s The Song of Wandering Aengus.

Harnoncourt, now in his mid 80s, began his professional life in the cello section of the Vienna Symphony Orchestra, in 1952, and formed one of the longest-running early-music groups, Concentus Musicus of Vienna, a year later.

But the achievement that Markson was focused on was not the work of Concentus Musicus in concert or the recording studio but on the way Harnoncourt had branched out, moving from early-music performances that involved early-music specialists and into the world of regular symphony orchestras and opera houses.

He crossed the divide between two types of institution that once seemed to be opposites, so that period-performance style from the likes of the Vienna or Berlin philharmonics or Amsterdam’s Royal Concertgebouw Orchestra are now a matter of course.

Witness the fact that Simon Rattle, born a couple of years after the establishment of Concentus Musicus, and now scheduled to move from the Berlin Philharmonic to the London Symphony Orchestra, is one of a new breed of conductor who works as readily with period-instrument players as he does with long-established symphony orchestras. The transitions work in both directions.

The RTÉ Concert Orchestra first dipped its toe in these waters back in the 1980s, but it has never really established a consistent profile in either 18th-century music or with period-performance-oriented conductors.

The position of the RTÉ National Symphony Orchestra is even more extreme. The orchestra eschewed anything major by Bach between 1986 (when the late János Fürst was principal conductor) and 2010, when Nicholas Kraemer was brought in to conduct Bach’s Mass in B minor. Landmarks since then have included the complete Christmas Oratorio, in 2012, the St John Passion, in 2013, and the Easter Oratorio, last year; and there’s a St Matthew Passion coming up on Good Friday, April 3rd.

Period-performance concerns, from orchestral layout to lightness of vibrato and transparency of textures, are ones that Kenneth Montgomery also brings to his concerts with the orchestra. Last Friday he conjured up otherworldly magic and mystery in Mendelssohn’s Midsummer Night’s Dream Overture and buoyant energy and outdoor freshness in Beethoven’s Pastoral Symphony. It would be hard to imagine a greater orchestral Operation Transformation than the one Montgomery effected in these two works. More, please.

In between, the orchestra’s principal cellist, Martin Johnson, gave the first performance of Frank Corcoran’s Cello Concerto. Corcoran long ago established a reputation as being something of a wild man, musically speaking, among Irish composers. Rawness and roughness are his stock in trade. He prefers the jagged, the shrill, the disruptive to the smooth, the sweet or the calming.

His note about the new concerto refers to the idea of the solo instrument singing in all registers. On a first hearing it sounds as if his concern to allow the cello breathing space has created something of a Jekyll and Hyde effect, with the orchestral ranting standing distinctly apart from the cello’s often more plaintive cries.

A Bite of the Apple: infectious enthusiasm of Virago publisher
9