Girl Band, Villagers and Róisín Murphy among the shortlist for the Irish album of the year prize 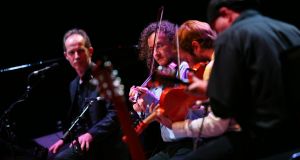 Girl Band, Villagers and Róisín Murphy are among the main contenders for this year’s Choice Music Prize, which has just announced its shortlist.

The prize picks the best Irish album for the previous year as chosen by a panel of 12 music media professionals and industry experts. Previous winners include Julie Feeney, Two Door Cinema Club and The Divine Comedy.

The shortlist for this year is:

HamsandwicH for Stories from the Surface (Route 109A Records);

Colm Mac Con Iomaire for And Now The Weather (Plateau);

Soak for Before We Forgot How To Dream (Rough Trade);

The winning act will receive €10,000, provided by the Irish Music Rights Organisation (Imro) and the Irish Recorded Music Association (Irma). Last year’s winner was The Gloaming.

The early favourites are Girl Band, whose debut has been a critical hit; Villagers, who have previously won in 2013 for