Burning Man: 10 guiding principles that could change the world 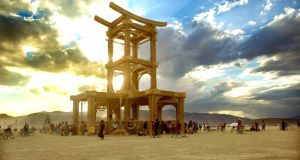 Trying to describe the Burning Man festival, which takes place in late summer or early autumn at Black Rock Desert in Nevada can be a tricky business. “I think the easiest way to describe it is by describing the intersections,” says Harley K Dubois. “It is an intersection between art and science, experiments and community, prototyping new ideas and experimenting with ways of governing people. Where those things start to overlap are the experiences.”

Dubois is chief transition officer of the festival, the cofounder of Black Rock City and a founding board member of the Burning Man Project. She was in Dublin recently to speak at the Best in Fest masterclass series, and described how the festival is based on 10 principles: radical inclusion, gifting, decommodification, radical self-reliance, radical self-expression, communal effort, civic responsibility, leaving no trace, participation and immediacy.

It has gone from an underground, cult event to a cultural phenomenon, inspiring countless events around the world.

In the 1980s and 1990s, Dubois was involved with a group called Cacophony in San Francisco. “It was an underground art scene, billboard liberation front, parties, crazy fun stuff,” Dubois recalls, “and one of the things that came on our radar was Burning Man.”

Everyone I met was really interesting, very diverse people, very artistic, but not so much in a traditional way but in odd ways

The festival began as a summer solstice evening ritual with a dozen people on Baker Beach in San Francisco in 1986, led by Larry Harvey. For Dubois, it began on a 1991 camping trip, when an effigy of a man was burned. The core of her early Burning Man experiences were about the other people involved. “Everyone I met was really interesting, very diverse people, very artistic, but not so much in a traditional way but in odd ways: art through innovation, scientific experiment and art that was physical.”

Flames on the horizon

Dubois, who studied fine art, recalls one moment that shifted her attitude towards what art could be and how she could experience it. “I looked at the horizon and saw a line of flames come up and disappear. I never thought of that as artistic expression, but of course it is. It was very stimulating.”

The people she met through Burning Man became central to her life. She taught exercise classes to pay the bills, but was drawn into the event, as she was living in a building with a lot of people who were already involved in it.

Dubois began working on the infrastructural side of Burning Man, manning the pre-internet hotline and getting back to volunteers. Onsite, she would build and light the temporary city, teach people about the desert they’re in, and help them find their friends.

Burning Man’s giant leap into the mainstream came more than 20 years ago, in 1996, when Wired magazine published an article about it. The festival’s connection to what could broadly be described as the technology community began then. Burning Man was about to blow up, but so was a new era of tech.

For seven or eight years, the festival kept doubling in attendee size. The Wired article brought it from 5,000 to 10,000 attendees. “That was difficult,” Dubois says. “It almost broke us.” The event’s infrastructure had to step up. The organisers encouraged people to walk on the playa or ride bikes. They made more roads so that emergencies could be dealt with more rapidly. In 1995, there were 32 theme camps (“gatherings of people like a storefront in the city”); by 1997, there were 100. Camps range from Christmas Camp to Camp Beaverton’s Burning Man Camp for Wayward Girls, as featured in the documentary Meet the Beavers (seriously, watch it.)

Dubois says Burning Man doesn’t consider itself to be a festival. They call themselves an event. “We don’t provide anything other than the shell, the vessel that allows people to bring what they bring. The world keeps evolving, so Burning Man keeps changing. It’s not any one thing, and that is really important.”

People bring themselves, their attitudes, their expectations, but there is also a good deal of preparation that goes into spending a week in the desert. The event is based on a gifting economy. There is an FAQ section on the website detailing how to navigate the sexual energy at the event, a nudge to leave high-maintenance friends/partners at home and then there’s hydration. Attendees must bring at least 1.5 gallons of water per day per person.

“One of the things that happens at Burning Man is that you get taken outside the game of money,” says Dubois. “We’re all used to buying things and having transactional relationships, but with Burning Man, you’re taken outside that game and asked to be with people. Once you take away the transactional relationships, what’s left is yourself and the honesty of yourself.

“It frees people up and allows them to see themselves really differently. For some, it’s a reset on their life: ‘Wow, I don’t have to behave like that, I didn’t realise I had these ideas.’ Oftentimes they come back and they’re changed.”

Right now we do have more people of affluence coming to our event. It does have an impact

In recent years, there are plenty of tales of tech millionaires and billionaires making the pilgrimage from Silicon Valley to expand their minds on the playa, while simultaneously bringing the trappings of wealth – which doesn’t sound very freeing when you’re talking about million-dollar RVs.

“It’s true that the fame of Burning Man has changed the awareness of others, so we’re getting different sorts of demographics; we always have,” says Dubois. “Right now we do have more people of affluence coming to our event. It does have an impact.”

A risk worth taking

Dubois says super-wealthy attendees can potentially isolate themselves with comfort so they don’t experience the real deal. But if they can experience what Burning Man has to offer and take that experience with them, then perhaps that can cause a ripple effect, “which changes the way they are, changes how they work, changes how corporations value their employees, and perhaps changes the way we do commerce together.

“Being able to influence people at that level is a powerful thing. It’s a delicate balance to not lose cultural relevance, but it’s a risk work taking because the impact you could have on society is profound.”

Dubois’s favourite memories of the festival involve her mother, who is 80, and her daughter, who is 13. Burning Man has given her mother vitality in her later years, she says, and for her daughter has allowed her to grow up in a creative environment where experimenting with new ideas is valued.

Europeans have a tendency to view the current boom in US festivals with side-eyes. If there’s one way to squeeze the authenticity and spontaneity out of something such as a contemporary festival, it’s handing it over to a hyper-capitalist society.

Coachella is mocked for being an insta-festival, replicated two weekends in a row, while South by Southwest never really recovered from making bands play on a stage designed as a giant Doritos vending machine. Yet Burning Man rails against commodification and commercialism.

“A lot of the ills and mediocrity in the world are based on people feeling that they’ve bought corporations as a lifestyle, that they’ve bought the idea that passively watching something and consuming are ways of participating, and that’s sad,” says Dubois.

“You know when you actually go out and do something and participate in something, that’s meaningful, something that has consequence. That and having fun is where the joy of life is.”

Don McLean on the meaning of American Pie: ‘Who cares, who gives a f**k’
7 The forgotten heroes of war
8