Could the thrilling vintage rock of four teenagers from Cavan be the future of Irish music? 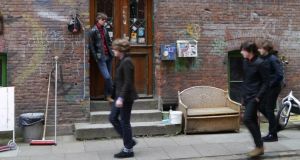 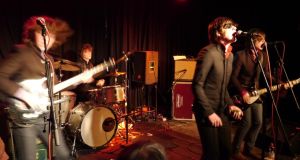 It is an unremarkable-looking doorway in a ramshackle red-brick laneway, but it is the scene of one of the most famous images of early rock’n’roll history: a 20-year-old John Lennon leaning against the well-worn wooden door, three of his bandmates a blur as they stroll by. The photograph captured a young Liverpool band before they were famous, still finding themselves and their sound in the all-night clubs of Hamburg’s St Pauli area.

One recent day four teenagers from Cavan, talented musicians on the threshold of a hugely promising career, are re-creating the pose in the same doorway. Guitarist Josh McClorey borrows a leather jacket from drummer Evan Walsh, leans against the wall – being careful not to ring any doorbells – and assumes Lennon’s stance, nonchalant and self-assured.

Walsh walks by with bassist Pete O’Hanlon and singer Ross Farrelly as Finn Keenan, a film-maker, tries to capture just the right amount of blur while Walsh’s father, Niall, the band’s manager-cum-guardian, offers choreographic tips. Everybody laughs as residents look on, amused.

It is another day in the life of The Strypes, and for this day at least they are following in the footsteps of The Beatles. That night they play their first German gig, at the Indra club, where, in August 1960, five Liverpool youths played the first of more than 300 concerts in Hamburg.

For these four Irish lads, aged from 15 to 17, their first trip to Germany is the latest escapade in a most unlikely adventure. It might seem as if The Strypes have appeared from nowhere, a precocious foursome with an uncanny ability to re-create the classic rhythm-and-blues sounds of the 1960s and 1970s who suddenly turn up on The Late Late Show and then sign a five- album deal with Universal. You would be forgiven for assuming they are the finely calibrated, ingeniously imagined product of a devious music Svengali determined to repackage classic R&B for a new generation, but the truth is more mundane.

“We get that quite a lot,” says O’Hanlon, a talkative, funny 17-year-old, who corrects the misperception with bemused good humour rather than anything approaching bitterness. “‘Oh look, here’s another product of the record-company machine that’s been thrown out, another manufactured, hyped product. But it’s not like that at all. We’ve been slaving away for the past two years, gigging.”

Home-grown genesis
McClorey, who is 17, explains the home-grown genesis of the band. “It’s three years in the making. Me, Pete and Ev have been friends since we were three or four; our parents were all friends. Instead of playing football we played music. I knew Ross growing up. I introduced Ross to the lads, and we started jamming more, then gigging a bit. Then it got a bit more serious, and it’s just taken off from there. And now we’re in Hamburg.”

Not all groups of friends who play football get to play in the Premiership, of course – McClorey’s modest explanation of the band’s development downplays the trajectory of their career since their blistering live performances began to attract widespread attention.

They were brought to the attention of Elton John, who didn’t hesitate to sign the band to his management agency, Rocket Music, where they joined a roster of acts that includes Ed Sheeran and Grace Jones. John is the most prominent of a growing list of famous fans – they have impressed Jeff Beck, Noel Gallagher and Keith Allen, too, and John celebrated their talent during a US TV appearance with Dave Grohl, of Foo Fighters and Nirvana. “They have a knowledge of R&B and blues at 16 years of age that I’ve only amassed in my 65 years,” he said. Grohl nodded in agreement.

The record deal with Universal’s Mercury Records followed in December, and the buzz has been growing since then, with an intense performance of their debut single, Blue Collar Jane, on Later . . . with Jools Holland in April confirming they are poised for big things.

“It was nine months of labels coming and going and negotiations, getting a lawyer and that stuff,” says Evan, who is 16. “So nine months or so of thinking it over, and by December we were ready to settle on a label.”

That down-to-earth attitude is typical of the band, who seem unfazed by it all. “People think we have this incredibly glamorous life, but this is what we’re spending most of our time doing,” says Evan as they get through a troublesome afternoon soundcheck at the Indra.

Niall Walsh, overseeing it all, is a calm presence who is no stranger to the world of soundchecks and lugging gear from venue to venue. He was in Fireflys, a band that had a fair degree of success in the 1980s. “It’s a job, a tough job, but enjoyable all the same,” he says.

Despite the emphasis on having fun, it’s a job they’re taking very seriously – McClorey says that they have played more than 200 gigs in the past 18 months.

Sceptics might regard The Strypes as talented mimics who dazzle as much because of their dates of birth as of the sounds they produce, but that scepticism evaporates when you see the band perform. Their proficiency as musicians and flair as performers instil a freshness and urgency into what might otherwise sound all too familiar.

“We were always pretty tight as a band. That helped in the live aspect of things,” says O’Hanlon, with understatement – from Walsh’s propulsive percussion to O’Hanlon’s rich bass, from McLorey’s extraordinary fretwork to Farrelly’s assured vocals, this is a supremely accomplished musical unit.

Their audience at the Indra ranges from star-struck teenage girls with cameraphones to middle-aged rock’n’roll-watching veterans, but the reaction is uniform: everybody goes crazy for it.

“So fresh, so thrilling,” says one fiftysomething local. “To take these sounds, these tunes we have heard so often, and turn it into something so fresh is amazing. Amazing.”

Onstage, McClorey is the ringleader, swaggering through his guitar work and eyeballing the crowd with the poise of a seasoned performer. O’Hanlon leaps through the set, swinging in time with the rhythms from his bass. By the end of the show Evan Walsh looks nearly wiped out, the cost of being the metronome of a “pretty tight unit”.

Farrelly, who at 15 is the only band member still at school, is self-contained offstage, but, tasked with breathing life into the band’s songs, he turns into a prowling, growling front man.

Down to earth
They have so much talent and are so likeable that you can’t help but hope they navigate the music business without getting chewed up or screwed up.

Expectations will be high for their debut album, due in September. “It’s hard to estimate the kind of success that it could generate, because the goalposts keep shifting so much,” says Evan Walsh. “Everything is teetering on the edge. It could go either way. But the sort of excesses that most bands crave don’t interest us in the slightest. We can’t be bothered about partying or fame for its own sake. The success is a byproduct of what we enjoy doing.”

Back when The Beatles were playing the Indra they were probably not quite as mature. Nor were they playing to crowds as big or attentive as the one left enthralled by The Strypes – an audience transported back to a different musical era while catching a thrilling glimpse of the stars of tomorrow.