Bob saw it coming – the times they have changed, changed utterly 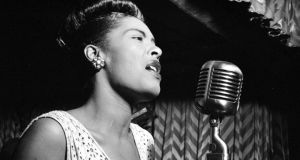 Billie Holliday singing Strange Fruit: There will never be a protest song as potent and affecting

To continue the protest theme in The Ticket this week, a look at the bleak future for all forms of popular music. Over the past three decades, there has been a consistent eroding of political themes and social-justice concerns from chart music.

Whereas once it was The Smiths, The Jam and others – all loud and proud left-wing voices, these day’s it’s the privately educated Coldplay and Mumford and Sons – perfect toe-tapping fodder for the politically naive and the disengaged.

Studies have shown that, in the 1970s, just one per cent of acts in the charts were privately educated. This year, the amount of successful acts with a private education has hit the 60 per cent mark. Mumford, Coldplay, Lily Allen, Florence Welch, Laura Marling – the list is long. The members of Radiohead met when they were at the £35,000-a-year Abingdon School.

It would be a stretch to directly link a good and expensive private education with the depoliticisation of popular music, but consider the point made by Sandie Shaw recently when the 1960s singing star stated that it would be impossible for her, the daughter of a Dagenham car worker, to repeat her success in today’s music world. “At the moment, unless you are Mumford & Sons and come from a public school and have a rich family that can support you, you’re on the dole and you’re trying to work” she said.

The broader point here is that in pre-recessionary times people could have day/part-time jobs that allowed them pay for musical instruments, rehearsal space, studio time etc, but with the financial heat now on and the music industry no longer spending money on developing acts, you really need serious money behind you – and that is not healthy for the creative/performing arts.

You’d be hard-pressed these days to find lyrics dealing with economic injustice or class divisions, but not so long ago, such lyrical stylings were commonplace. And it wasn’t just Billy Bragg – bands were activists.

There are other musical consequences to these post-recessionary blues. The Klaxons said last month that because it is so expensive to be in a band these days, a lot of people find it a easier to just buy a laptop and do everything themselves. We’ve been long due a cull of indie landfill bands, so this can only be a positive development.

You could argue though that popular music has an imperative to reflect its times. There will never be a protest song as potent and affecting as Billie Holliday’s Strange Fruit, as the world is a very different place now. But there remains so much of concert – both locally and internationally – and it is shameful that popular music so blithely ignores issues that matter.

People will tell you that it was through listening to great pop music by The Blades or The Gang of Four that alerted them to important injustices. The biggest song of last year? Blurred bloody Lines.

Yes, music has lost its pre-eminent status in popular culture, but this is even more reason why it needs to re-engage. Songs can change the world. As Phil Ochs noted “one good song can bring a point more deeply to more people than a thousand rallies”. Time magazine voted Strange Fruit the song of the century. It made a difference. The times they have a changed – but not for the better.