Bell X1: A strange journey to their ‘difficult’ seventh album

Writing the follow-up to their hugely acclaimed ‘Chop Chop’ album prompted a lot of soul-searching for the band, but in the end they followed their hearts 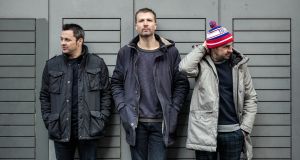 That old trope of the “difficult second album”? It’s not true – at least not in Bell X1’s case. The “difficult seventh album”, however, sounds a little more familiar. Paul Noonan, Dave Geraghty and Dominic Phillips are tucked away in a corner of a bustling cafe in Dublin city centre, plates and cutlery clattering in the background, to discuss Arms, the follow-up to 2013’s Chop Chop – a record that won them the best reviews of their 18-year career.

“It’s been a bit of a strange journey,” Noonan admits, smiling. “Chop Chop felt like the most coherent body of work that we had made, and it was probably the easiest and most enjoyable. So in trying to regroup and make this one, it’s been a real struggle to feel like we had something that was worth putting out. It led to a lot of soul-searching, in terms of our reason to exist and what is it that we are? And what do we want to say?

“There were several points during this process that we would have had some really enjoyable weeks in the studio, but still felt deflated that we hadn’t reached a point that we had something that we wanted to share. Sometimes I’m overwhelmed by the amount of music I haven’t heard, and we didn’t want to add to the noise. We wanted to say something profound. But I feel this record has a sort of loose, buoyant, celebratory vibe about it. The last record was quite a stately, beautiful affair; this one is a little more shambolic.”

Figuring out a pathway into Arms proved more trying than on any other album experience, says his bandmate and co-songwriter Geraghty.

“It was like having a few different varieties of pasta – do we make the tube pasta, or the swirly pasta?” he says, laughing. “We could have made three different types of album with the body of work that was there. It could have been a continuation of Chop Chop. Another strand was a garage band-style thing, like The Walkmen, all angular and youthful stuff. Then there was another batch of songs that didn’t fall into either category – and our hearts just said, ‘Follow that clutch of songs.’ We didn’t really know what it was yet, but that was the exciting part.”

“The idea was that it would be less of a song than it is a vibe – a short, 2½-minute fade in/fade out thing that would set the mood,” Noonan explains. “In a lot of ways, working through the frustrations and fumblings that eventually led us to where we wanted to go, there was this element of ‘fail again, fail better’; almost thriving on the experiences of dead ends and feeling good about the challenge of it. We wanted that first tune to have a touch of The Big Lebowski, where Walter says, ‘Fuck it, dude, let’s go bowling.’”

The writing process began in January 2015, when Noonan would cycle across the city and Phillips would drive from his house in Meath to meet at Geraghty’s studio, in the garage of his house in Raheny.

“When I moved out to Raheny, we finally got to set up the gear there and it was really useful for Chop Chop too,” adds Geraghty. “It’s been cool, ’cos we feel like we can just switch on, tune in and play at our own pace, being led purely by the sound and without the stress of moving gear or expenses totting up; no ‘quick, quick, we need to come up with something . . . or do we book another week?’ It was, ‘What do we feel like playing today?’ and that was really beneficial.”

“Not just sonically, but he helped with some of the decision-making as well. He had categories: ‘the old Bell X1’, the ‘sex vibes’ and I can’t remember the third one,” recalls Phillips, laughing. “He was kind of like our first port of call, our first set of ears outside of the three of us, apart from management.”

Keating’s influence can be felt on the more offbeat, experimental tracks like I Go Where You Go and Out of Love, while he also steered them gently away from what Noonan jokingly refers to as the “totes emosh stuff”.

“That was something that Glenn identified,” he says. “He put it very nicely, but he definitely said, ‘I think you can ease up on the totes emosh.’ A couple of our bigger songs would be that sort of overtly emotional and heartfelt, which there’s nothing wrong with – but it can be too easy to go there again. There are those moments on this new record, but we wanted to handle them a little less . . . clunkily.”

He’s right; the likes of Take Your Sweet Time and Sons & Daughters tackle emotion in a more considered way, the latter musing on the world that they are leaving behind for their children that saw them “juxtaposing a serious subject matter with something upbeat and jaunty”. Musically, their palette was drawn from some unlikely sources – everything from Grace Jones’s Island Life album to Metronomy to Sly and the Family Stone.

Ring in the new

“There’s a healthy fear of, ‘Well, maybe people won’t bother this time,’ because why would they?” says Phillips, shrugging. “There’s no guarantees. It’s nice that people like the gigs, but if you put out the same old thing, it would kind of slowly dissolve into nothing. Whether it has to be fresh and different, or just ‘good enough’? I dunno – but we’re proud of this one and we’ve enjoyed the journey that it’s taken us on.”

“There were times that we were unsure, but I don’t think we were ever lost,” says Geraghty, nodding sagely. “Because we were doing what we love doing, essentially – which is getting together and hanging out with pots of tea and making music.”

Arms is released on October 14th . Bell X1 play Limerick, Cork and Belfast this month and in November.

‘We serve neither Queen nor Commisar’: The birth of the Provisional IRA
6 The 50 best Irish music acts right now
7