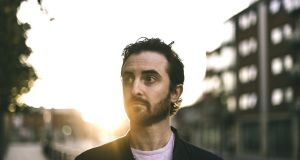 If you wanted to do a quick litmus test on the quality of Irish music today, Bantum’s Move album is a clear example that we’re doing alright. More than alright, actually. With familiar names such as Rusangano Family, Loah and newcomer Farah Elle featuring, it’s an exact guide of who we should be listening to right now.

The man behind Bantum – or “the man under the yellow hat”, as some fans from his live shows will tell you – is Ruairi Lynch, a Dublin-based musician, DJ, producer and composer from Cork.

The album opens with the title track, a clunking, svelte number not unlike Daniel Avery’s work on Drone Logic, and the orbing Pacing, which is dedicated to Conor Walsh, the minimalist piano player from Mayo who died suddenly in March of this year.

“I was listening to a lot of The Front EP of his at the time. It was suggested to me that I might approach him to collaborate on the track, but we never did, sadly,” he says. Walsh’s music had a huge effect on musicians and fans across the country and the EP he released in October 2015 was a huge inspiration for Pacing.

“The piano line is just me trying to sound like Conor – just a heavily reverbed piano. And I know that Jon Hopkins does a lot of that as well. He brings in a lot of beautiful piano lines to his techno tracks.”

For the past few years, Lynch was busy composing music for the short film Little Bear, which won the Audience Award for Short Films at the Dublin International Film Festival, and teaching Ableton software production classes through the Block T creative institution.

He had no notion of making or releasing an album this year, but when he recorded Take It with Sallay Garnett – better known as Loah – it led to the creation of another song on the record. An album was slowly starting to form.

“She [Garnett] recorded this melody line in the background and that’s where Voodoo Sweat came from,” he says. “From that vocal, I recorded about three guitar lines on top and it turned into this Prince-funk track with CC Brez and Louize Carroll.”

Collaborative celebration
Although its creation was incidental, Move is a collaborative celebration. Feel Your Rhythm features Limerick’s Rusangano Family and Cork’s Senita, who fronts the funk band Shookrah, and Already There is an introduction to London singer Weisman. One of the standout tracks is Feel It Out, a woozy, sultry affair, enhanced by Dublin- Libyan singer Farah Elle.

“I really wanted to put her on the record. She’s totally different. The vocals she sent me, I didn’t expect at all,” he says, in awe of the 22-year-old’s skills. “I had this – it was just a drum beat and a synth that I didn’t have a clue what to do with. And I sent it to her, not thinking I’d get anything back but she came back with the whole arrangement, and what you hear on the track was the demo that she sent me. I didn’t even go near a studio.”

Lynch released Legion, his first album, on the Eleven Eleven Label in 2012. From there he sat in on studio sessions with Richie Egan, eating tomato sandwiches and learning different production tricks, and in the eight (ish) years that he’s been making music in Dublin, he’s learned so much from the music community he’s involved himself with.

“I watched CC Brez play a couple of weeks ago and he had James Vincent McMorrow’s rhythm section playing with him – as you do,” he says, laughing. “It’s really cool to just walk into a bar and see that in Dublin. I never expected to be in this situation myself, moving to Dublin. I didn’t even know how to produce music when I got here, but I’ve just been diving into it.”

Even if he didn’t expect it, Move is a firm promise that we’ll be seeing more of Bantum and his yellow hat.

How absurd: the world as Albert Camus saw it
Real news has value SUBSCRIBE