After stints as backing singer for Kwabs and Pulp, Nao has moved centre-stage and her avant-soul sound is getting a lot of love 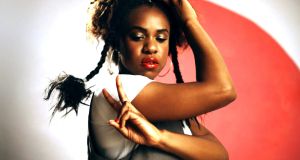 All together Nao: “I was playing it safe. Singing in other people’s projects meant I never had to put myself out there, but I could still learn a lot.”

The words “Yukimi Little Dragon” silently flash on an iPhone, eliciting a strange mix of embarrassment and delight from its owner.

“It’s the lead singer of Little Dragon,” Nao explains, speaking of her former tour headliner. “I texted asking for some friendly singer advice, and I expected her to ignore me or text back next week or something. I didn’t think she’d call me straight back.”

Welcome to the world of Nao, where Yukimi Nagano rings up for chats, Jungle clamour to produce you, Victoria Beckham uses you to soundtrack her runway shows and Disclosure draft you in as a guest vocalist.

It’s a novel place for the unassuming 27-year-old Londoner, who stepped into the spotlight just two years ago, after spending time as a Guildhall School of Music and Drama student and later as a backing singer for Kwabs, Jarvis Cocker and Pulp.

“I was playing it safe back then,” she says, over a tea in a café around the corner from her Stoke Newington studio. “Singing in other people’s projects meant I never had to put myself out there, but I could still learn a lot.

“What I really learned from being around Pulp is to hold your nerve. They were around for 15 years before Common People came out. There must have been a time when they were like, ‘so when do we stop?’, but they still kept to their vision and they were still super-indie. Eventually their time came, but it still took 15 years.”

For Nao, influenced by her five elder siblings’ varied musical tastes, her avant-soul sound – think SBTRKT producing Janet Jackson – is unmistakably current. It’s no surprise the music industry had their cash in the air the minute she set up her stall, which she did in 2014.

“As soon as I decided to make a go of it, I booked a gig at the Electrowerkz. Because in order to do that show, I needed music, I needed a band, and there’s nothing that motivates you like a deadline.”

Indeed, the dive-in-at-the-deep-end approach swiftly led to a completed EP, So Good, in November that year. It also meant Nao was pressed to consider her on-stage presence early on, which has benefitted her evolved show. As will be evident at this year’s Electric Picnic, but is more marked at her indoor gigs, visuals contribute significantly to her performance, be it through the dramatic strobe lighting or her trademark silhouette: a burst of huge hair, small frame and harem trousers.

Her sense of style partly explains why her second EP, February 15, was a natural choice for Victoria Beckham’s catwalk show at London Fashion Week, with Apple Cherry also used in Chanel’s recent ad starring the original hair whipper, Willow Smith. Is fashion another potential outlet for her in the future?

“I don’t think so,” she says, scrunching up her face at the idea. “I’ve never been amazing at fashion, I’m not that interested in it. I’ve had to be a bit recently and it can be quite fun, but I still don’t like shopping.

“It’s too much information when you walk into a shop. I just want to get what I need. I wear jeans until they split, and then I get a new pair from Marks & Spencer, because I know they’ll fit.”

She started the year by coming third on the BBC’s Sound of 2016 poll, and this summer sees the release of Nao’s much-anticipated debut album, For All We Know, named after the title of her favourite jazz standard.

The album was recorded with a variety of producers, including AK Paul (brother of Jai), Jungle, Loxe and Grades, yet its cohesive sound – whether invading Prince’s territory or FKA Twigs’s – suggests Nao was the driving force of the operation.

“I know I don’t have all the ideas, so I wanted to work with different people so I could bounce ideas and get different energies,” she says. “But it definitely felt like my baby. I started a lot of the beats by myself and when I went to a session, we would work it together.

“It might seem like I’ve collaborated with a lot of people on the record, but it was only ever me and another person on any given track.

“Someone like Rihanna would have 18 people work one song alone. Maybe I should have done that, then I could have come up with Hotline Bling.”

As it is, the cornerstone of the album is the achingly cool Inhale Exhale, which first appeared on February 15 and marks the pivotal moment she nailed her sound.

“I was working it out quite publicly through the two EPs,” she says. “But when I wrote Inhale Exhale it fell into place.

“It was an experiment in keeping things simple, because I felt I was overthinking the music and getting too intricate with the chords.

“So I just put a beat down, came up with a bassline, and it became all about the feel rather than the musicality. After that I pieced together other songs like Zillionaire, and I journeyed on from there.”

The album is already a favourite for awards season – good news for RCA, who at the start of the year acquired the rights of her label, Little Tokyo Recordings. Its set-up was another aspect considered at the very beginning, in order to start as she meant to go on.

“We set it up partly so that we could sign other labels to it in the future, but mainly so when signing to a major label, I could have more control over the music.

“Labels can be really involved; some A&R people book you writing sessions and tell you which songs to sing. But doing it through my own label means I A&R myself, and it sets the tone of doing what I want to do: the way it’s been from the start.”

If it ain’t broke.