DJ Arveene describes the early days of his life in music to Nialler9, and hands out gems of advice, such as 'Be impeccable with your word' 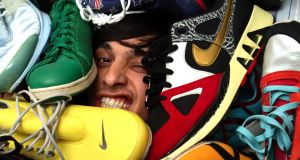 DJ Arveene: “People have to understand what we do as DJs and how we want to present it”

Arveene Juthan remembers distinctly the moment it became all about the music. It was his first time in a club as a 16-year-old at François Pittion’s night in Eamonn Doran’s in Temple Bar, Dublin, surrounded by an mixed crowd of northsiders, southsiders, rich people, “hoodlums”, gay and straight.

“There was a remixed club version, a promo of Primal Scream’s Rocks played,” he recalls. “It was the first time I heard it and it lifted the place. It heavily influenced me, that moment.”

That moment was to be the start of a long career in music. Having grown up in a household that played Irish trad and Bollywood music, Arveene fervently lapped up an eclectic mix of Chicago house, Public Enemy and techno, and could be found hanging around record stores of Dublin meeting DJs such as Billy Scurry, Johnny Moy, Dave Hales and the D1 crew. The only thing holding back the Rathfarnham kid was his age, but he quickly circumvented that.

Calling in a favour
“When I was 16, I wanted to go to Temple of Sound, but my sister wouldn’t let me go to it as it was a serious club. I was devastated,” he says.

At school the next day, he told his mate Rob of his desire to go to that club and how he would have to wait two years to go.

“Rob turned around and goes ‘My dad owns the Temple Of Sound’.” A plan was hatched and Arveene was put on the guestlist plus 10.

“The following weekend, Andrew Weatherall was playing, and myself and my mates, who were older than me went to the club,” says Arveene.

Entry was refused immediately by bouncers and the manager.

“There were no mobile phones then, so I had to leg it down to a phone box. I rang Rob who was at home and told him what happened. He told us to go wait across the street. When we walked back down to where it was, his dad was outside and asked me who told me I couldn’t get in. I said the manager guy, and he turned to him and said ‘if you ever stop him coming in here again, you’re fired. Bring him and all his mates in’. I wasn’t interested in drink or drugs, I just wanted to stand near Weatherall and Billy Scurry playing the decks.”

A DJ career soon followed. Arveene’s sister, Sharria, who works as head of artist relations in Universal London brought him along to a Jamiroquai afterparty in Lillie’s Bordello, where he got talking to a booker in the Temple Bar Music Centre. “He offered me 50 quid and I said yeah. I barely had enough records, I think I played a couple of things twice.”

London to Dublin
At 19, Arveene moved to London for six months to work at BMG a move aided possible by Mike Pickering, the Hacienda DJ. He would fly home at the weekend to DJ.

“I made more money in an hour in Dublin DJing than I did in a month in London,” he laughs.

Arveene did what he could to keep his oar in music. He DJed regularly in the Chocolate Bar (which would become Pod), The Kitchen and Traffic (before it became Twisted Pepper). He brought over international DJs as part of Nylon, a Sunday night club. He ran distribution for D1 Records looking after 15 or so record labels including ones from Donnacha Costello, Decal, David O’Donohue and Psychonavigation.

Despite the changes in DJ culture over the years, Arveene is still clearly in thrall to it, though he misses the physical aspect of it that was facilitated by record shops such as Abbey Discs.

“Access to music is so easy now. Back then, you had to get promos, white labels – go in to the shop and root around. Everything was harder to get. I miss that part of it, even though it was elitist, it made it more special to a certain degree. But I do like that it’s more inclusive now.”

In 2001, Arveene was accepted to the Red Bull Music Academy, something that helped boost his already-wide network. “It blew my mind and introduced me to a global network of people,” he says.

Five years ago, while doing a radio show for Spin FM and remixing the likes of The Prodigy, Mr Oizo and Calvin Harris with his friend Phil Byrne as Arveene & MiSK, Arveene decided to make the move once more to London. He had been playing there a lot thanks to Erol Alkan and Chandra who ran the club Durrr, and he knew the likes of Darren Emerson and Ashley Beedle.

Curation
Spend some time with Arveene, whether it’s at a festival, in Dublin or Ibiza and it’s clear that the man knows a lot of people in music. That’s a plus for event organisation. Arveene’s been putting on events in London showcasing Irish electronic music and most recently, curating the Absolut stage at Body & Soul, a brand he speaks glowingly of.

“They just get it, they understand it and I don’t have to explain it. People have to understand what we do as DJs and how we want to present it. That’s hard to find.”

Arveene will be the first to admit that he wouldn’t be where he is without the help of the likes of Johnny Moy and Billy Scurry, and that’s something he’s passing on to the next generation.

“You can have all the talent but if you get the break, that changes everything. I’ve always been about giving people a break, whether it’s at Body & Soul with young heads who are brilliant like Mix & Fairbanks and Ciara Brady. Otherwise, it dies and I don’t want it to die with me.”

I ask him for some final words of advice for those who are now falling for a life in music, as he did.

“Do what you love. It’s a marathon not a race. Don’t rush into anything but don’t hang about. Hang around great clubs that play music and listen and learn. Never judge a book by its cover. Be impeccable with your word. Bring positivity. Figure out what you’re good with and get on with it. Try that thing you’re thinking of doing. If you fall down, get back up. It’ll be worth it.”