The Danish songwriter talks to Tony Clayton-Lea about her new album, Citizen of Glass 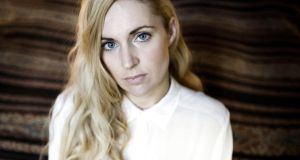 Agnes Obel started dabbling in studio recording and production techniques at the age of 17.

Her father’s passion was to collect odd and arcane musical instruments; her musician mother played Chopin and Bartok every day.

There was an intuitive classical piano tutor who told Obel she was so good that she should never play what she didn’t like.

That guiding comment has stayed with her ever since.

“When I was a young teenager, I had ambitions to be a musician, but I was too scared to tell anyone. Maybe I didn’t think I was good enough. I had a lot of friends who were into music, but I would never dare to tell them that I also wanted to do music.

“At that time, I recall wanting to be involved more with storytelling or lyric writing than playing an instrument, so maybe that’s why.”

Several years later, at the age of 17, Obel started dabbling in studio recording and production techniques.

This was the beginning, she implies, of her adult life.

“There was a musician who came into the studio to make his own album, totally solo, and I thought that was so cool. Here was someone who was into telling his own story, creating his own music, and I found that fascinating. I’m sure now that was what inspired me to do what I do.”

She fondly recalls getting to grips with the “very basics of recording principles, all the analogue machines”.

Digital resources arrived later: “when the likes of Pro Tools came along a glass ceiling was broken for a lot of people, including me, and when it became much cheaper I was able to buy the equipment. That’s when my songwriting really started.”

So began a slow process of writing, playing and recording music.

Obel took her time. Her debut, Philharmonics, was released six years ago, and presented the singer as a singular talent. Slow, sombre, sepulchral – these signature descriptions are enhanced by a strong sense of simplistic melodies and her blend of piano and voice.

Three years later came Aventine, another slice of unhurried elegance. Her third album, Citizen of Glass, has just been released, and while hat-trick seems too sporty a term to use in the context of such sophistication, there’s little doubt that Obel has delivered a beautiful record.

“As indicated by the album title,” begins Obel, “I wanted to write about transparency and the difference between secrets and confession. That topic was new to me, and is derived from the German concept ‘gläserner burger’ or Glass Human.

“It’s the term used to describe the level of privacy a person has in relation to the state, big corporations, medical areas, or even within the framework of social networking.

“There’s a strong sense these days – these decades, even – that we’re all under surveillance. I also use myself for material, of course; in that, I experience things and then I think, ‘Can I use these experiences in a song to either entertain, document or share their lives?’”

If Obel could do anything so out of character as spit with a sneer, then she almost does that when she utters the word ‘share’.

She says she doesn’t feel comfortable using social networking platforms for anything other than work-related topics. As usual with Obel, however, there is a cerebral tangent.

“I find it interesting that there’s the possibility of unedited output for everyone. I think that’s great at certain times and for certain reasons – we just need to discuss how to use it and what level of ethics and filtering we need for it.

“Of course, everyone can use their life as material; that’s good for people to reflect upon, but problematic in there’s a danger we’re all removing ourselves from the moment.”

She knows where to draw the line, she reveals, but reckons it only gets really interesting if you use your own experiences.

“I prefer pieces of art, music, and so on, where people are open with themselves, or are very brave with exposing personal aspects. On the other hand, I’m a firm believer that secrets can be very good to have and to keep.

“It’s almost what you don’t say that means the most, if you know what I mean. I feel like that with music, too. Revealing is good, and I like that from certain artists, but is full admission actually possible? How do you know that what you’re hearing is the truth?”

It all comes back to this, Obel remarks – the increase in her confidence and experience from teenager to 30-something was a leisurely, often imperceptible process. Her tone of voice lowers even further.

“My younger self would be very happy to know that she would be doing music. I knew when I started the production work that it would lead to something. I had some vague ideas, but just wasn’t sure. Of course, I had no idea back then that I would be releasing albums.”

She allows that luck has played a part, is grateful for its mercurial values, but realises if she hadn’t worked so hard and not put herself into a position where she’d be able to make records, then it might never have happened.

“You have to know this about me,” says Obel, glancing surreptitiously about her, as if no one else must hear.

“I am not the kind of person who would feel happy in themselves if I hadn’t done it the way I’d done it. If I couldn’t have done it my own way, then I wouldn’t have done it at all. The work doesn’t feel like work to me, because it’s why I do it. If that were taken away, then the result of the work wouldn’t be me.”

“And that,” Obel concludes in a very matter-of-fact fashion, “would be no good at all.”