A glorious gamelan with a distinctive Irish accent 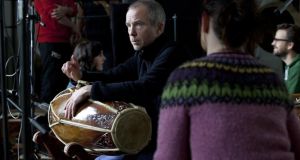 The gamelan, a collection of traditional Javanese percussive instruments, has been skirting the periphery of our musical landscape for more than two decades now, and UCC professor of music Mel Mercier has been one of its staunchest exponents.

The gamelan, a traditional instrument that has travelled a long way from its Indonesian home, has found a number of acolytes here. Since 2013, when Mercier founded the Cork Gamelan Ensemble, Irish audiences have had the chance to hear a series of newly composed pieces, both within the traditional idiom and on a more experimental level. The Cork Gamelan Ensemble releases its debut album, The Three Forges, this month, with guest musicians including Iarla Ó Lionáird, Duke Special, Julie Feeney, Colin Dunne, Kate Ellis and Nick Roth.

Mercier commissioned the Cork Gamelan Ensemble’s gamelan in the 1990s in Java. All gamelans are one of a kind, in terms of the distinctiveness of their individual sound, so this Irish-resident gamelan brings its own accent to bear on the rich mix of music that Mercier and his co-conspirators have conjured for it.

“People talk about it having three sections,” he says. “There’s about a five-octave range, with the gongs providing the punctuation, and they’re the ones that are played least often. The middle row, which are like xylophones but are made of bronze, carry the melodies. The front row has the elaborating instruments, of a higher pitch, and they require more technique and more skill to play.”

What Mercier describes as a “surge of vitality” accompanying the introduction of the gamelan to UCC’s school of music is audible on The Three Forges. Musicians come together to play within a certain ritualistic context. Shoes are discarded and musical rulebooks set aside. So a traditional fiddler might play alongside a classical pianist and a jazz saxophonist. The gamelan, by its very nature, introduces a democratising influence on music-making, and it has clearly been embraced by those who love its sound and shapes.

“One of the wonderful things about gamelan music is that it’s quintessential ensemble music,” says Mercier. “It’s a place where you’ve got to listen to everybody else, and there’s no room for ego, because there are no soloists as such. So you are just one part of the whole.”

The eclecticism in the Cork Gamelan Ensemble came as a surprise to Mercier, who had thought it might be more attractive to traditional musicians. “Interestingly, you can have a highly accomplished classical pianist encountering exactly the same musical and technical challenges as someone with more limited skills. Javanese music turns everything on its head, in a way,” says Mercier.

“It’s constructed differently, and the scales are different, so playing the gamelan is an embodied experience of this musical culture. When you play the gamelan, you feel like you’re in the music. It’s a wonderful feeling.”

Percussive dancer and Riverdance veteran Colin Dunne contributes a riveting performance on Telephones and Gongs, an original, non-traditional piece composed for the gamelan by Linda Buckley and Mercier.It was made by mapping the composers’ mobile phone numbers on to the melody-playing instruments of the gamelan’s seven-tone pelog scale.

“[The song] is really quite rhythmically complex in terms of its phrasing,” says Dunne. “I had to really understand and notate the piece musically by the numbers, so that I could freely improvise to it. Once you know the structure of something, you can then be as rhythmically simple or complex as you want in relation to it. The timbre of the gamelan and the structure of this particular piece are really quite demanding, and kind of dictatorial in terms of a physical response, but I try also to find my own counterpoint to it.”

“The act of singing with the Gamelan Orchestra was a completely different experience,” she says. “It felt as if my body was a giant ear, contorting my shape and twisting myself where I had to adjust the whole cavity of my body in order to pitch correctly. It is utterly unlike performing with a classical orchestra, which is all concert pitch.”

It sounds as if Feeney’s work with the ensemble may only be starting. “Composing our song together was technically the first co-writing experience I have ever had,” she says. “The words and character are all mine, but the melody came about in such a beautifully curious way for me. A pre-formed energy flowed from the orchestra. It was a thrilling experience to work in such a way with them.”

Collaboration is at the heart of Mercier’s musical identity. He has done extensive work in sound design for theatre, including a Tony-nominated score for the Broadway production of Colm Tóibín’s The Testament of Mary, and The Three Forges was only made thanks to support from UCC.

“Most of the pieces were made by inviting the artists, into the gamelan room with nothing predetermined,” he says. “We tend to think of the gamelan room as a kind of forge, where the music is fired and made. That’s where we explore and share, and see how we can somehow or other push into each other to find an interesting space that we can both inhabit together.”

There are plenty of sombre films about. Should we be surprised?
8