Ian Rankin is asking the questions; Marty Whelan is declaiming poetry; so what happens when Van eventually gets round to some music? 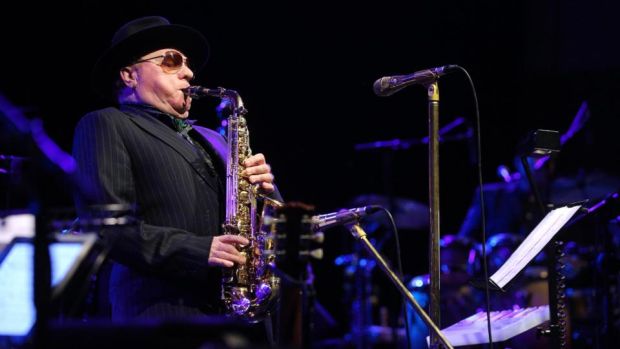 On stage is the sort of lineup that an ambitious arts-festival curator with money to burn might dream up. Ian Rankin, one of the finest writers of flinty Scottish fiction, is lobbing questions at Van Morrison, perhaps the most inscrutable musician to call Ireland home. Completing the line-up is Eamonn Hughes, who has corralled a selection of Morrison’s lyrics into Lit Up Inside, a book being sold as a collection of poetry.

The questions are amiable, and Morrison is in talkative form, even if the conversation never moves much beyond Morrison’s early life, gentle musings on Belfast in the early days, and the gems to be found in the racks of Atlantic Records. The only minor revelation comes when Morrison remembers going to play on US army bases in Germany, playing eight sets a day, seven days a week in what they called Boot Camp: X Factor might now have its next format change.

Short films are shown, and Michael Longley lends his elegant presence to proceedings, to read a selection of Morrison’s verses as poetry. Things take a puzzling turn, when Marty Whelan follows in Longley’s footsteps. After telling a rather charming story about an improbable meeting with Morrison at the Rose of Tralee, he reads Madame George. When the tapestry of Morrison’ s music is hung on them, the lyrics hold a mystery; decoupled, they sound bare and exposed.

It’s the second half of the show, though, that’s most appetising. To see Morrison on stage is to witness the best and worst of being in a band. Guitar techs are terrorised, as he picks up instruments and drops them almost as quickly when the sound on stage isn’t too his liking. (“Turn it up!” is the frequent Northern bark.) He directs on a whim, chopping verses short, pulling choruses long, expecting the band to be in the pocket as he tailors on the fly. The stage hums with tension, and often the tracks buckle at the joints. On stage, the musicians are too anxious to inhabit the tracks fully, and even with Morrison flitting from guitar to sax and back again, it feels a little bloodless. Moondance, Tore Down a la Rimbaud and Coney Island are as familiar as old friends, but the fire glows rather than rages.

And then, without warning, it clicks, softly and definitively. Into the Mystic lowers down into the softest bed of music you could imagine, each player in the palm of Morrisson’s hand as he urges them on to evermore musical subtlety, until they stop just short of silence. It’s a masterful distillation of music, and worth the ticket price alone.

Infuriating and fascinating, uplifting and frustrating: Van Morrison remains as brilliant and as inscrutable as ever.