Five surviving members, including John Cleese and Michael Palin, due to announce move 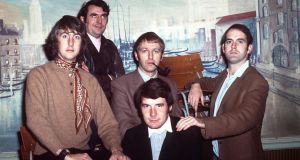 Comedy veterans Monty Python are set to reunite for a stage show.

Jones told the BBC: “We’re getting together and putting on a show — it’s real.

“I’m quite excited about it. I hope it makes us a lot of money. I hope to be able to pay off my mortgage!”

Meanwhile, Idle tweeted: “Only three days to go till the Python press conference. Make sure Python fans are alerted to the big forthcoming news event.”

The famous comedy group will make their announcement at the Playhouse Theatre, the London venue where Monty Python musical Spamalot is running.

Groundbreaking show Monty Python’s Flying Circus, famous for its Dead Parrot sketch and for breaking the rules on traditional sketch writing, was made for TV between 1969 and 1974 and drew fans around the world.

Only three days to go till the Python Press Conference. Make sure Python fans are alerted to the big forthcoming news event.

The Pythons went on to make comedy feature films including Monty Python And The Holy Grail (1975) and the controversial Monty Python’s Life of Brian (1979), the story of a man who was mistaken for Jesus.

The controversial movie was attacked as blasphemous by religious groups but despite being banned by some councils it was a huge box office success in the US and UK and went on to be named the “greatest comedy film of all time”.

Their final film, Monty Python’s The Meaning Of Life, released in 1983, was the last time the six Pythons worked together on a full-time project and won the jury prize at the Cannes film festival.

The five remaining members of the comedy group appeared together in 1998 at the Aspen Comedy Festival in the US.

In 2006, Idle, Gilliam, Jones and Palin attended the London opening of Spamalot - Cleese was filming in Australia — after the show first opened in Broadway.

Following the success of Monty Python, the comedy group have enjoyed success in their own careers.

Cleese showed off his comic talent and co-wrote hit series Fawlty Towers as well as co-writing and starring in A Fish Called Wanda, which also featured Palin.

Jones directed Idle, Palin and Cleese in a 1996 film adaptation of The Wind In The Willows.

A spokesman for the Pythons remained tight-lipped about the announcement, saying: “A press conference is set for Thursday where the Pythons themselves will be unveiling their plans to work together again.”

The tricky art of carbon footprints
6