Modern Ireland in 100 Artworks: 1988 – The Great Wall of Kinsale, by Eilís O’Connell 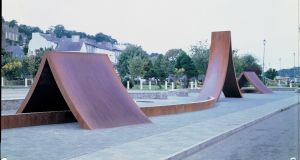 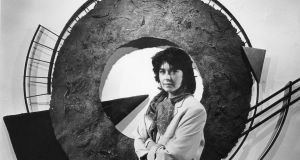 Eilis O’Connell, from Cork, in 1984: she trained under John Burke at the Crawford School of Art. Photograph Matt Kavanagh

When, in an interview in 1999, Eilís O’Connell said that “the whole field of public art” was more developed in England, and much more progressive there, she was speaking from experience. Although born in Ireland – in Derry, in 1953 – she was then based in London and had completed a string of commissions for venues in the UK.

Her experience of working in Ireland had been marred by the controversy that surrounded her public sculpture The Great Wall of Kinsale. Commissioned by the Arts Council for the local urban district council, to celebrate Kinsale’s achievements in the Tidy Towns competition, the sculpture was intended to serve as an entrance to Kinsale Town Park. The local TD Joe Walsh (who was also minister of state for agriculture at the time) unveiled the sculpture on July 24th, 1988, describing it as the highlight of improvements to the park.

Although many agreed with him, not all locals were so enthusiastic, and some placard-carrying protesters made their grievances clear at the unveiling.

O’Connell already had a considerable reputation as a sculptor when she received this commission in 1987. She had trained under John Burke at the Crawford School of Art, in Cork (from 1970 to 1974), as a result of which she became particularly accomplished at working in steel. Time that she spent studying sculpture in Boston in the mid-1970s augmented not just her early studies but also her awareness of the work of artists abroad. It is unsurprising that she lists the American Richard Serra among artists whose work she admires.

Back in Ireland O’Connell was among the winners of the GPA Awards for Emerging Artists in their inaugural year, 1981. She was a participant in Rosc ’84 and was elected to Aosdána the same year.

She was well positioned to be selected for the Kinsale commission, acknowledged at the time as the largest of its kind among public-art commissions in the country. The length and narrowness of the site and its proximity to the harbour did not necessarily facilitate the realisation of two aspects of the commission brief: first, the gateway element and, second, that the material be maintenance-free. But O’Connell’s assured handling of the brief resulted in a creation that has a commanding yet subtle presence on the quay.

Abstract, undulating and harmonious, the work, comprising open and closed forms, incorporates such practical components as seating and shelter. The use of Cor-Ten steel for the rhythmic forms was intended, if permitted, to allow the structure to age naturally, with visual and textural interest.

What could possibly be the objections? The work was considered hazardous, with its tent-like forms encouraging children to cycle up them, and the colour and finish of the material were considered unsightly. (Coincidentally, this was the same material that Michael Warren used in his controversial Gateway, erected in Dún Laoghaire in 2002 and removed in 2009.) Also, some locals thought that a traditional sculpture would have been more fitting.

Attempts to have the work removed, although unsuccessful so far, have never quite gone away. The sculpture remains in place, but the local authorities have introduced metal barriers, potted plants and more, and the Cor-Ten steel has been painted over. O’Connell, rightly angered, has indicated that the work has lost its original integrity. But she has also pointed out that The Great Wall of Kinsale, so controversial in Ireland, won her credit in the UK and led to her many commissions for large-scale work there.

In an exhibition at Crawford Art Gallery in 2011, O’Connell took the opportunity to transform the controversy into an artwork, showing documentary material, including newspaper cuttings, letters and photographs of the work in situ.