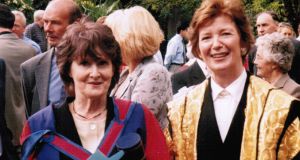 Friends since university: Eavan Boland and Mary Robinson at Trinity College Dublin, where they met in the 1960s. Photograph courtesy of Eavan Boland

In her inaugural address as Ireland’s first female head of state, in December 1990, Mary Robinson declared that “as a woman I want the women who have felt themselves outside history to be written back into history, in the words of Eavan Boland, ‘finding a voice where they found a vision’.”

The two women had been friends since their days as students at Trinity College Dublin, in the 1960s, and both were important figures in the resurgence of Irish feminism in the 1970s. But this was more than a namecheck for an old comrade in arms. Robinson was acknowledging that the social change symbolised by her election owed a great deal to the way Boland and others had been writing women not just back into history but into a transformed Irish identity.

Poems such as Anorexic can be read as subversions of the traditional image of Ireland as Kathleen Ni Houlihan. In 10 hard, stripped-down monologues that Boland once called “anti-lyrics” she takes on the consciously provocative challenge of making a new aesthetic “from this trash / and gimmickry / of sex”. Male reviewers were often shocked that a poet already admired for her technique and rigour could be so confrontational; one called the poems “curiously unpleasant and at times offensive”. One bookshop even refused to stock the book: a rare honour for a slim volume of verse.

Boland, like Máire Mhac an tSaoi (see 1956) and Maeve Brennan (see 1974) could be described as a daughter of the State. Her mother was the fine painter Frances Kelly. But her father, Frederick Boland, was one of Ireland’s most distinguished diplomats, serving as president of the United Nations general assembly in 1960. Eavan, though born in Dublin, grew up largely in Irish ambassadorial residences in London and New York.

This background creates a particular tension in her work. As a feminist she is inclined to walk away from the whole idea of “the nation” from which “the true voice and vision of women” are routinely excluded. Yet, as she wrote in her prose collection Object Lessons, “I was not free to. For all my quarrels with the concept, and no doubt partly because of them, I need to find and repossess that idea at some level of repose.”

Her answer to this dilemma has been to rework the traditional embodiments of women in myths of Irish nationhood “by exploring the emblematic relationship between my own feminine experience and a national past”.

This strategy is political as well as aesthetic. Some feminists argue that women’s experience, excluded for so long, simply cannot be expressed with the structures and images of a male-dominated culture. Boland, however, has occupied the Irish public poetic tradition that stems from WB Yeats (see 1933), taking on its concerns with myth, history and the Irish landscape while forcing it to make room for female experience.

For all its rigour and elegance, Boland’s work is a thrilling power grab. It reclaims femininity not as an image or metaphor but as a lived reality.