The screen-print of Che Guevara, based on a photograph by Alberto Korda, became a global symbol of protest 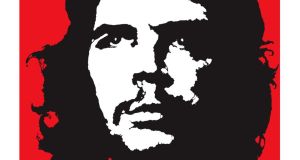 It comes as a surprise to many people that Jim Fitzpatrick, an artist usually associated with neo-Celtic mythological imagery and not generally recognised by the art establishment in Ireland, is nonetheless the creator of one of the best-known portraits of the 20th century. As a teenager Fitzpatrick actually met its subject, Ernesto Che Guevara, the Argentine-born Cuban revolutionary leader. Fitzpatrick is a Dubliner who spent his summers with his mother’s family in Co Clare; he was working at the Marine Hotel in Kilkee in 1963 when Che Guevara, killing a few hours at Shannon en route from Moscow to South America, dropped in for a drink and a chance to talk about his Irish ancestry.

Four years later, when Guevara was murdered by counter-revolutionaries in Bolivia, Fitzpatrick turned a photograph of him by the artist Alberto Korda into a dramatic red and black screen-print that became the most recognised badge of protest and class struggle all over the world. Printed on T-shirts, badges and posters, Viva Che shone out from student protests in Paris in 1968, anti-war protests on American campuses and peace marches in Northern Ireland, before going on to Palestine, South Africa and the Middle East over the next four decades.

Guevara’s face in this portrait – seen slightly from below, with his gaze directed above and beyond the viewer, with the surrounding details from Korda’s original photograph cropped out – was powerful on its own. When combined with the larger-than-life history of the man himself, it was instantly appealing to young audiences in search of a contemporary hero.

Fitzpatrick’s eminently reproducible, simplified graphic – screen-printed in two colours, with the star in his beret hand-painted by Fitzpatrick – became the common identifier for demonstrators all over the world as they crashed against police barricades.

Commercial interests subsequently competed with the revolutionary cause, and the image was used to sell objects as diverse as men’s underwear and ice cream. Andy Warhol did a version of the image that sat happily alongside his other mass-produced, and highly commercial, portraits of rock stars and screen idols. More recently the British artist Gavin Turk did a painted version for the Saatchi Collection.

In Ireland Viva Che was the most successful example of pop art, a movement that sprouted briefly in the late 1960s in the work of artists such as Robert Ballagh.

Neither Korda nor Fitzpatrick ever sought to make money from the image they created, both declaring their support for Guevara’s revolutionary principles and their desire to see his message spread around the world.

Trisha Ziff, an American writer who curated the exhibition Images of Che Guevara in Barcelona in 2007, describes Fitzpatrick’s Guevara as a “an image out of control” and goes on to claim that it has become a brand. “And the brand’s logo is the image, which represents change. It has become the icon of the outside thinker, at whatever level – whether it is anti-war, pro-green or anti-globalisation.”

In Ireland, just as Viva Che was making its way into international stardom, another Irish artist, Louis le Brocquy, was beginning to explore first Celtic and later ancestral heads. These explorations paved the way for his many studies of famous figures, such as James Joyce, WB Yeats and Samuel Beckett. Although adored by the Irish art world, they never caught the public imagination the way Fitzpatrick’s image did.

As for Jim Fitzpatrick, he went on to collaborate with John Lennon, and he retains his place in youth culture through his Led Zeppelin, Thin Lizzy and Sinéad O’Connor album covers and his books and illustrations of old Irish stories and legends.

‘There’s nothing to forgive’: Pete Best on being sacked from The Beatles
7

Goebbels: Driven by narcissism and a need for Hitler’s admiration
10

André Rieu: ‘I see a lot of jealousy around me’
Real news has value SUBSCRIBE