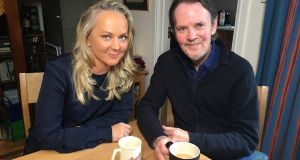 Dr Eva Orsmond in a scene from her new RTÉ documentary, ‘Medication Nation’.

As a cascade of brightly-hued pills and tablets tumbles down the screen, bouncing against a fathomless black background, it looks for a moment like the television has become a spinning galaxy.

Perhaps this documentary about Ireland’s growing dependence on over-the-counter and prescription drugs is selling itself short with the title Medication Nation (on Monday, RTÉ One, 9.35pm).

Judging by its opening sequence, Medication Universe might be more appropriate.

The role played by drugs in our lives is a global problem, but presenter Dr Eva Orsmond – herself a panacea for fans of dancing medics on Dancing with the Stars Ireland – is keener to localise it.

She tells us: “In Ireland there’s a expression - ‘A pill for every ill’.”

That’s actually not an Irish expression, but statistics suggest it might as well be.

There are twice as many pharmacies per capita here than in Britain, while we spend 77 per cent more per person on prescription drugs than the richest European country, Norway.

It might be closer to the truth, though, to say that Irish people were traditionally primed to love their doctors, an insight briefly shared by Maureen Kavanagh, CEO of Active Retirement.

“This is the generation that looked on the doctor as being the person with all of the expertise,” she says of her clients, as though doctors were priests who supplied better answers.

Here is the first juncture where Orsmond and her director Niamh Sammon might have attempted a more nuanced diagnosis of the problem; asking questions of Irish culture and its historic deference to authority figures, the recent boom in consumer culture, the shortcuts taken by a beleaguered health service, and the insidious course of addiction.

However, that’s a broader scope than an hour-long documentary allows.

Instead, the programme spreads itself thin with reiterative portraits of sufferers, and seems more occupied with symptom than root cause.

Countless interviews with individuals about their drug consumption are wedded to consumer statistics, such as how every Irish man, woman and child spends €500-a-year on pharmaceuticals. Indeed, Orsmond seems determined to speak to all of them.

The documentary works its way through a list of the most prescribed medications in the country, making everything seem like a culprit.

Orsmond looks at antibiotics whose overuse will diminish their efficacy, with drastic consequences; at anti-depressants and anti-anxiety medications prescribed in lieu of talking therapies, and on ruinously addictive Benzodiazepine sedatives and opioid painkillers – some of which may already be in your handbag.

Known as much for her “no-nonsense” approach as her media ubiquity (and for making Operation Transformation contestants cry), Orsmond conveys sympathy for her interviewees, but does not seem as conversant on the vice grip of addiction.

Why do patients who have been on benzos for decades want them?, she asks a Cork-based GP.

“They’re bloody effective,” he replies , adding that patients have threatened to stab his colleagues in order to get a fix.

There is also the question of whether a show as wary of prescriptions as Medication Nation can suggest a plausible antidote.

Unsatisfyingly, it pays less attention to the influence of Big Pharma (here represented by a faceless disclaimer from the manufacturers of Nurofen Plus) on the issue than it does to an ethically troubling segment in which Orsmond helps an anonymous codeine addict to count out his fistful of tablets.

“I’m a medical doctor and I find this really scary,” says Orsmond, yet it’s hard to see what the sequence adds besides controversy.

More than the shots of raining bright pills, the most regular images we see in Medication Nation are of bucolic surrounds, as Orsmond drives through country roads, or walks in the forest, something which eventually tilts us towards a glib conclusion.

“There is a growing body of evidence that mindfulness and exercise can be more beneficial than drugs for stress reduction and pain management,” she asserts.

Who wouldn’t agree with the benefits of a healthier lifestyle? But if the problem of prescription drug addiction is already as bad as the documentary argues – and here statistics are not forthcoming – then the State needs more robust recovery programmes, not just well-intended advice to “reframe the brain”.

Someone who threatens to stab a doctor in order to get a Valium may find that mindfulness is much harder to swallow.