‘Once’ director John Carney’s new film has been dubbed ’Twice’ as it is about a couple making music around a city, this time New York, but he says it is part of a portfolio 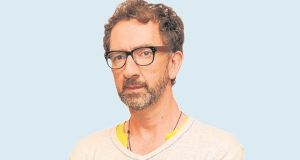 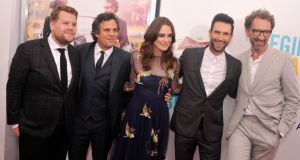 Take heed of the American press and you could be forgiven for believing that John Carney ceased to exist for most of the last decade. Can it really be eight years since that director’s Once charmed Sundance, scooped up international raves and – as unlikely as an Irish battleship shelling Beijing – won an Oscar for best original song? So the calendar tells us.

In that time, John has been busy. He directed two low-budget features: left-field comedy Zonad and spooky drama The Rafters. He brought a handful of larger projects close to production. But, so far as much of the wider world is concerned, Begin Again, a delightful musical idyll starring Mark Ruffalo and Keira Knightley, must stand as John’s “belated follow-up” to Once.

“Well, I would like to say that I was biding my time,” he says. “And that I didn’t want the two musical projects to be too close together. I did have two or three things simmering at once. There was a Fox film called Town House with Amy Adams and Zach Galifianakis. Then the studio pulled out.”

There are various sub-narratives to the Carney story that often go unexplored. Over a decade ago, the Americans courted him following the completion of two experimental features – November Afternoon and Park – made with fellow Dubliner Tom Hall. Carney’s third proper feature, On the Edge, a drama with a young Cillian Murphy, emerged quietly in 2001.

“I was aware of how quickly these things can go away,” he says. “I felt that if it did all fade then I would still have this one thing that’s my own project. And that’s what happened. I wasn’t working all the time at Begin Again, but I was chipping away at it constantly.”

A tall man with plenty of prominent features – from some angles he resembles a more Celtic Vincent Cassel – Carney admits to certain insecurities, but nobody meeting him for the first time would conclude he lacks confidence.

Raised in leafy Dublin 6, Carney played alongside Glenn Hansard, star of Once, in an early incarnation of The Frames, before going on to invent a place for himself in the then moribund world of Irish film.

Hall and he shot November Afternoon and Park for pocket money with the most basic equipment. Working with Kieran Carney, John’s brother, they then went on to register a notable success with the series Bachelor’s Walk for RTÉ.

He makes things happen. So, it always seemed likely that the big US project would come to pass. Begin Again has, to this point, gone down very nicely with the critics. If there have been mutters they have concerned the picture’s similarities to Once. The earlier film starred Hansard and Markéta Irglová as a couple making music amid busy Dublin locations. Begin Again has Ruffalo and Knightley doing something similar in New York City. At least one reviewer has referred to the picture as Twice.

“Yeah, I’m getting my balls broken about that,” he laughs. “Somebody once advised me to specialise. Don’t be afraid of repeating yourself. Think of them as paintings that will hang on the wall. People can then assess them when there are 10 of them. ‘This one’s annoyingly like that one.’ And so on. I see Once and Begin Again as a series of musical films. There will be more. That’s not just an attempt to get myself of the hook for apparently repeating myself.”

As Begin Again arrives on this side of the Atlantic, more than a few wiseacres have been pulling apart its entrails for references to incidents in Carney and Hansard’s life. Knightley plays the girlfriend of a pompous musician (Adam Levine) whose song has just featured in a hit film. In the opening section, as it all goes to his head, the couple split and Knightley, a hopeful singer, ends up hanging out with Rufallo’s boozy record-label boss. Anybody who saw the recent documentary on The Swell Season, the band formed by Hansard and Irglová, will admit that certain parallels are apparent.

“Well, okay, the Adam Levine character is an amalgam,” Carney says. “But he is mostly me – with a handsome actor playing me. Ha, ha! Once was a real test of character. You suddenly have options. You have money. I didn’t become famous, exactly. But suddenly I was known in the business. My time became valuable.”

Having encountered Carney more than a few times in that period, I don’t remember him becoming notably more monstrous. “Bill Murray has this theory that, when you become famous, you are allowed to be an asshole for 18 months. If you are still an asshole after that period then you’re just an asshole. I saw that with a few actors I knew who got successful and didn’t come back.” It hardly needs to be said that Carney won’t name names.

As he explains it, Ireland is a tricky place to suddenly find yourself a success. He is, thank goodness, not trying to kick up any of that nonsensical paranoia about “begrudgery”. His point is a more practical one. Who do you ask for advice when studios are leaving confusing messages on your mobile? When the notion of turning Once into a stage musical was posed, Carney didn’t really know where to turn.

“What do you do? Do you phone Neil Jordan? In LA you’ll be talking to these people and you’ll discover their grandfather played violin on Casablanca or whatever,” he says. “Also in America there is room. In Ireland it often feels like there’s just the one spot for success. You mustn’t take my room! Bachelor’s Walk was a success and then Paths to Freedom came along. I remember thinking, hang on; that’s our place.”

Once remains a valuable calling card. Begin Again is positively crawling with stars. Mos Def, CeeLo Green, Catherine Keener and Hailee Steinfeld are among those buzzing around in the background. This is all very nice. But given how much of the film was shot on the streets of New York, the celebrity baggage must have caused a few problems. It’s one thing following Hansard and Irglova about Grafton Street. It’s something else entirely shooting Keira Knightley in Greenwich Village.

“That’s me. The only time I did something different was On the Edge. That had crane shots and so on. That’s not me. I can’t get that right,” he says.

So what about the difficulty of managing Knightley and the snappers? “There were times when, if I’d moved the frame a few feet to the right, you’d see 500 people behind a barrier. It was crazy. But in my humble opinion now I hang around with famous people, ha ha! – Keira deals with photographers in the worst possible way. She gives them nothing. So the stock for a good Knightley photo is really high. You can get 20 grand for one. She doesn’t do what others do: turn up on location, wave and give them a million pictures. They then get bored with them. God forbid anybody should be bored with Keira Knightley.”

Real life has not been kind to Carney recently. A little over a year ago, his oldest brother Jim died and Begin Again carries a dedication to him before the end credits. I notice also that the director wears a tattoo bearing his brother’s name on his right arm. John explains that the Mark Rufallo character in Begin Again bears a few traces of Jim.

“Jim felt a personal investment in him because he felt that was him. There was a way that Mark did it that made me think: that’s my brother when he was 25. That didn’t come from any plan. I showed Jim the rushes and he said: ‘you owe me’. But he never got to see the final film.”

Carney’s next project features a more explicit tribute to Jim. The punningly titled Sing Street, another variation on the musical, takes John back to his days at the Synge Street School in Dublin during the 1980s. He does not remember his school days with unalloyed glee. But being in a band did allow him a degree of escape.

“That’s a real tribute to Jim. He’s really alive in the film. It is about a young kid and his relationship with his older brother,” he says.

“I think my parents had given up on me. ‘We’re not spending any more money on this kid.’ I formed this band and, I know this sounds corny, but it meant everything to me. But that’s kind of why I am now making a film about it – because it was just too perfect.”

The project has already generated a great deal of publicity thanks to the involvement of U2. Bono and The Edge have agreed to write some songs for the piece and are helping corral other musical talent into the party. It turns out that Mr Hewson has been at John’s shoulder intermittently over the last eight years. Yes, there are at least four people in the country who can offer advice on the perils and possibilities of success.

“I didn’t know what to do when it was suggested that Once would become a Broadway show,” he says. “He was good on that sort of stuff. Should I invest? He said: ‘Do you really want to invest in your own show? You’re an artist!’ That was a good angle. Do I really want to become an investor? Maybe not.”

He pauses for a resigned cackle. “It turns out I should have. So that was rubbish advice.”

Dublin International Film Festival: A guide to the best movies
5