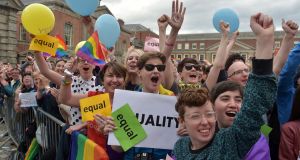 A year on since Ireland said Yes to marriage equality a bunch of parties and exhibitions are marking the date. The big one is Yestival at the Tivoli on Dublin’s Francis Street, featuring queer Canadian icon Peaches performing live, Mother DJs, and a thisispopbaby stage with drag supergroup Sugar Rush (Panti, Shirley TempleBar and Veda), Rubberbandits, Jonny Woo, and more. Tickets €20 from Eventbrite. Elsewhere, the monthly women’s roof party Spinster kicks off at 11pm on Saturday at Bad Bobs in Temple Bar (€10).

Electric in Galway is holding a Yes! party, with a screening of The Queen of Ireland at 8pm on Saturday followed by the Alice club night. On Sunday, there’s an all-day party in Electric’s Biteclub, along with a table quiz hosted by queer activist and DJ Tonie Walsh and Anthony O’Donoghue. Proceeds go to Amach LGBT Galway. electricgalway.com.

If you’re looking for something a little more sedate, the A Day In May exhibition runs at the Gallery of Photography in Temple Bar until Sunday, with beautiful portraits of LGBT people to accompany Charlie Bird’s book of the same name. The Road to Equality: the History of the LGBT Movement in Ireland is an exhibition at the Wood Quay venue in Dublin City Civic Offices, which launches on Monday at 6.30pm. The exhibition also features documents on the community’s response to the HIV/Aids crisis.