It’s all in the delivery: Thom Yorke refuses to do a U2 on his new album 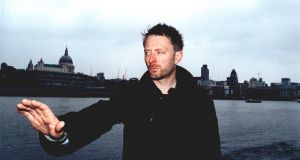 It’s a rum state of affairs when the two biggest music stories of September involved the unsexy matter of delivery solutions.

U2 and Thom Yorke, two of rock’s big beasts still standing, released new albums, but the talk was as much about how their new albums were released as what was on them.

YOU’VE GOT TO HEAR THIS
Jennifer Evans – Works From the Dip & Foul
(Delphi)
Evans is a singer-songwriter who has
long caught the ear. Her debut album
is a striking riot of moods and colours,
with rich, atmospheric songs and
beautiful widescreen canvases
rendered with washes of jazz and blues.
Set for release in November, it’s a
debut truly well worth waiting for.

Yorke also chose a different way to distribute new album Tomorrow’s Modern Boxes. While you can still acquire it as a deluxe vinyl package, most people will likely spend a few quid to get the album via BitTorrent. Yorke calls this “an experiment to see if the mechanics of the system are something that the general public can get its head around”.

That’s a smart statement. Yorke acknowledges that the majority of the general public have never come across torrents before. Many of his fans may be savvy in this regard, but that’s a small enough constituency in the greater scheme of things.

Furthermore, torrents are something that are wrapped up with piracy in many minds due to how the music industrial complex has chosen to spin P2P technology. That a respected artist such as Yorke has decided to go this way gives an imprimatur to this alternative mechanism. He could, of course, have sold the album via his own website or any number of direct-to-fan networks, but he obviously had his reasons for selecting BitTorrent.

It’s a sign that megastars can do things differently and still make a living. One thing that rubbed people up the wrong way about U2’s approach was the constant blather by Bono about payments. Yes, dude, we know you got paid. We know money matters to you despite the millions you already have and the tax you’re saving by using different jurisdictions.

Whatever your feelings about their music (IMHO, only one decent album and that was Kid A), Radiohead are a band who have the courage to do things differently. Their In Rainbows payment experiment was hugely influential, while individual members are constantly seeking to stretch their creative muscles.

Yorke could have sent his manager out to seek a big cheque from a corporation such as Apple for the new album, but that’s not his style. Instead, he sought a solution to the problem of how musicians get their music to people in 2014 and still get paid decently for it, without all the worldwide huffing and puffing and self-affirmation. It’s a lesson many more acts should heed.

ETC
Hard Working Class Heroes Convention
This comes with a declaration of interest (I’m involved in programming and chairing the event). Today and tomorrow, the HWCH Convention will feature a host of music biz- related panels, workshops, conversations and lectures featuring makers and doers from here and abroad. The venue is the NDRC in Dublin’s Liberties, admission is free and full details are at hwch.net.

The movie quiz: Who has never had a film banned in Ireland?
8

Patrick Freyne: Britain’s Best Parent? Dominic Cummings, obviously
10 Convert with a lot of convincing yet to do
Real news has value SUBSCRIBE