Irish voices to a Chinese ear 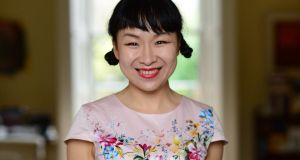 Fudan University in Shanghai is one of the busiest student campuses on the planet. It has some 45,000 students who study everything from business and law to visual arts. Its 10 teaching hospitals are equipped with state-of-the-art technology and it boasts some gobsmacking architecture, including the 460ft Guanghua Twin Towers.

Long recognised as one of Asia’s most prestigious universities, it is educating the next generation of Chinese movers and shakers. And in the midst of this whirl of energy and colour, there’s a little bit of Ireland.

Rewind a couple of years. A tiny but determined young Chinese woman with a passion for medieval manuscripts has graduated from Fudan and is searching for someone to supervise her doctoral thesis in middle English literature, specifically the story of Sir Gawain and the Green Knight.

What did Huiyi Bao know about Ireland before she came here?

“I always liked Irish literature,” she says. “I was translating Heaney and Yeats on my own before I came. There was something about Ireland that was always very attractive to me. I think of Ireland as like a lighthouse on the edge of Europe in the medieval period. So I always pictured it as a very quiet place where I can live like a hermit and study properly.”

Presumably that impression was shattered when she actually arrived? Bao laughs. “It’s not that different,” she says. “It is very quiet and you can live like a hermit if you want. In the last year of my PhD, I was living in a garden-level basement, and no one ever came down except for cats.”

She did, however, make one discovery that absolutely delighted her; the contemporary Irish poetry scene.

A poet herself, back in China Bao had already published translations of Sylvia Plath and Elizabeth Bishop. In Dublin, she began to immerse herself in a range of contemporary Irish writing and travelled around the country making notes, which she has since published in China as a kind of literary guidebook, Annals of the Emerald Isle. She also translated the copy of Yeats’s Sailing to Byzantium which President Michael D Higgins presented as a gift to President Xi Jinping on his state visit to China in 2014.

Her PhD thesis now complete, Bao has taken up a post at Fudan’s department of English, but her connection to Ireland continues. She is the Irish editor of a new international poetry series to be co-published next March by Fudan University and Northern Literature and Art Press.

The first book, Irish Quartet, will contain Bao’s translations of poems by Paula Meehan and Harry Clifton as well as translations of Paul Muldoon and Michael Longley by Bao’s colleague Li Jin Peng.

These poets present an image of Ireland which is the opposite of any stereotyped official “brand Ireland”. It’s intriguing to imagine what a Chinese reader might make of Meehan’s vision of her father as St Francis in a Finglas garden, or Clifton’s poem The Death of Thomas Merton – but from the translator’s point of view, is it difficult to move from English to Chinese, which looks so different on the page?

“It is very different,” Bao agrees. “The first principle is, it has to stand as a good poem in Chinese. If I can reproduce everything faithfully but it does not read like poetry, that’s a failed attempt.”

Her first loyalty, she says, is to the poet’s own voice and style. “It sounds impossible, but there are these lucky moments where you feel you have become this musical instrument and you don’t need to do anything – the music just flows through you.” She smiles ruefully. “But these are lucky moments.”

Bao’s first volume of her own poetry, A Pagan’s Book of Hours, was published in Beijing in 2012. But her time in Ireland has, she says, modified and influenced her style of writing. “In Shanghai, it’s a luxury to be able to be quiet and by yourself,” she says, “but in Ireland you find time and space have evaporated, in a way. I feel I can listen to the smaller things in this world, which is just not possible in Shanghai.”

Such things as birdsong, the buzzing of bees and the sound of the waves on the shore at Blackrock, where she stayed during her first year at UCD. “I went there every night for a walk. So now, whenever I am alone, what I hear is the sound of the waves and the seagulls,” she says. So Ireland has, quite literally, got inside her head? She laughs. “Yeah, it did. But I’m afraid it’s fading at the moment after three months in Shanghai.”

If Irish Quartet is a success, the plan is to produce further books of Irish poetry in Chinese translation; a selection of the work of Nuala Ní Dhómhnaill in both Irish and Chinese is already in train. And who knows what further links, sparks and connections may be forged from there?

In Jah we trust: how reggae spread the Rasta word
Real news has value SUBSCRIBE