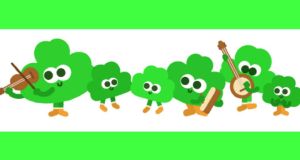 Although the team at Google has gone green for St Patrick’s Day before, it is the first time an Irish person has designed the logo, according to O’Neill.

The Arklow-based writer and illustrator may not get a bigger shot at exposure - ever.

Quite a lot of people will get to see O’Neill’s work today. Millions of people, in fact.

Everyone who uses google.com, google.co.uk and google.ie in the US, UK and Ireland will see O’Neill’s traditional instrument-wielding happy shamrocks.

Google Doodles, as they are known, are a temporary alteration of the logo on Google’s homepage celebrating holidays, events, achievements and people.

O’Neill got an email about two weeks ago asking him to pitch ideas, he said. The head of Google Doodle, Ryan Germick, had seen the illustator’s work on the website eamonnoneill.ie.

The company invited him to show what he could do specifically for Ireland’s national day.

According to O’Neill, it is the first time an Irish person has been asked to pitch ideas for Google Doodles for St Patrick’s Day.

O’Neill pitched four ideas. “I just wanted it to be simple,” he said.

The company was also offered illustrations of St Patrick and the snakes, the St Patrick’s Day parade and a number of famous international buildings turning green.

From a call two weeks ago to global internet exposure, the Dún Laoghaire Institute of Art, Design and Technology graduate is taking it all in his stride.

He is waiting on a response from Nickelodeon about his pilot short cartoon about a bird, a cornflake and a horse, and is also writing and illustrating a children’s book.

But for today, the Bafta-nominated filmmaker is enjoying the rub of Google’s green.

It is time for a sharp inhale, people. Sally Rooney’s Normal People is superb
Real news has value SUBSCRIBE