How Music Works: from peeling spuds to promoting the greats

In How Music Works, Niall Byrne talks to Irish people who make a living in the music industry. This week: Bernie Divilly, International Marketing Manager with Domino Records, on making the move to London 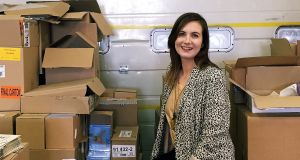 Bernie Divilly of Domino Records: “The music and the artists are at the centre of everything we do, and it’s a mutually respectful relationship between label and band"

As a Madonna and New Kids On The Block-loving teenager in Monivea, Co Galway, Bernie Divilly felt far removed from the bright lights of the music world. However, the rise of Britpop fanned an interest in the music industry and it became an obsession for Divilly that resolved in a career.

“When you’re a 14-year-old on the rural west coast of Ireland in the mid-90s pre-internet access, it’s a bit tough to see a clear career path from peeling spuds and daydreaming about Alex James to shooting album covers and doing press trips with bands,”  says Divilly, who currently works in Domino Records, one of the most successful independent labels in the world.

Divilly took a practical approach to gaining a foothold into the music world, first by helping out in the NUIG Music Society while doing an Arts Degree, and later, while studying a Masters in PR at DIT, examining music companies as part of her course work, which included producing a PR plan for Phantom FM before it received its licence and undertaking a case study of First Music Contact.

Contact book
“In the back of my mind, I was lining all these people up to contact for jobs at a later date,” says Divilly. Further experience on the Hot Press Yearbook firmed up that contact list and she was subsequently recommended by Hot Press deputy editor Stuart Clarke for a junior publicist role in Entertainment Architects (EA), a music PR company run by Aileen Galvin and Emma Harney.

"I liked what they were about and I knew I would learn loads from them,” says Divilly, who worked at EA for four years (advancing to a senior role in the process) with artists such as Fight Like Apes, Duke Special, The Charlatans and Debbie Harry, and on projects for Other Voices, IMRO and Cork x Southwest.

“Getting to know a band and what made them tick, hearing their record for the first time and watching the pride on their faces, figuring out who might like it at radio, pitching them for TV, promoting tours around the country, thinking of what angles might work for them,” were the kinds of things required, says Divilly with an obvious passion. “The work was pretty full-on, and for years my job was my whole life really. I guess that’s quite common in your 20s, when you are doing something you love and trying to climb that slippery career ladder.”

Label interaction
Seeking more direct experience with labels, Divilly moved to a PR manager role with PIAS Ireland, which had some of the same job responsibilities but with more label interaction. There she worked on campaigns for Adele, Sufjan Stevens, The Pixies, Mogwai, The National, and Radiohead.

“Artists and business are often a tough mix. The best thing to do is always be honest. Everyone’s faking it a little bit, and that even the most successful-seeming person has doubts and fears.”

PIAS' more global operational experience led Divilly to consider her next move - to the brighter, busier lights of London. She joined Domino Records in 2012. As the International Marketing Manager, she oversees international campaigns across all territories with the exception of the US and UK.

“ Once we sign an artist/band and an album is delivered, I liaise with our label partners in each territory, discuss bespoke plans for the artist in their market and oversee marketing strategies, budgets, release plans and targets, communicate about ideal touring possibilities and so on.”

“The music and the artists are at the centre of everything we do, and it’s a mutually respectful relationship between label and band. Campaigns are bespoke, carefully planned and well executed. We love vinyl and put a lot of care into its production, but we also have the best digital department around. We see the necessity of streaming and new tech ventures in music and are always open to discussing exciting ideas, but we keep our collective head and maintain relationships with record stores and understand the importance of traditional media as well. Domino is in it for the long run.”

Domino has always had a strong Irish contingent, with one of the company directors, Harry Martin, based in Dublin. Recent years have seen the label sign the likes of Villagers to its roster, while publishing contracts were offered to Girl Band and Lisa O'Neill.

“We have a constant stream of Barry’s and Tayto coming over the homeland,” quips Divilly. “Irish people in general do really well in London; from what I can see, our strong work ethic is appreciated and we have the ability to strike up and maintain conversations with complete strangers - which was a skill I never truly appreciated until I came to the UK.”

As Divilly has moved from PR to the label side, gaining experience in the process, the foggy naivete of youth has cleared, making the inherent gender inequality more obvious.

“The PR environment in Ireland, where I started out, was full of these strong, vibrant women, and that was the world I was trying to conquer, which was very was encouraging,” she says. At the same time, of the 35 radio station heads Divilly dealt with around the country, only one was a woman.

“I’d like to see more women in A&R and artist management, more women starting labels, running labels and competing for director positions and top management roles.  I really believe that strong female mentors are absolutely key to female empowerment within the music industry – within any industry I guess. The more I accomplish, the more I realise how lucky I was to have been surrounded by incredible women from day one, and then throughout my career – running their own companies [Entertainment Architects], managing labels [Alison Rogers of PIAS Ireland], running departments [the VP of International in Domino is female].

“This is so encouraging for an impressionable twentysomething. It makes you believe you can achieve the same, or more, and you need to keep seeing these women as you move up in the world, not have it suddenly cease at middle-management level. ”

View from across the water
Having moved to London for her career, what does Divilly think of the Irish music industry?

“I’m not sure working in the music business is seen as a valid career choice. I certainly have always felt that I was expected to grow up and get a real job for many years – so graduates leave the country for elsewhere and often just don’t come back.  All industries take time to find their footing, and within the creative world, this is especially so. If we want a healthy domestic industry, we have to invest in its infrastructure and resources.

“ Working in international, I see how the French and Canadian governments support their domestic music industries – everything from radio quotas for domestic music to touring and video grants. Ireland just seems to churn out reports which confirm that this and that and other is lacking, but there isn’t any real policy or action surrounding it.”

Despite the lack of opportunities at home, Divilly misses the friends she made along the way and makes an effort to come home for gigs as the bands are always more relaxed.

“In London they have to be in work mode, in Dublin it’s party time,” she says before adding a caveat. “Work as hard as you party; never party more than the band!”