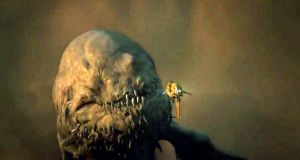 Irish film-maker Ruairí Robinson’s latest project The Leviathan has been picked up by X-Men writer and producer Simon Kinberg and Chappie director Neill Blomkamp. The move by Robinson and Blomkamp comes a week after a spectacular Irish Film Board supported teaser that Robinson created achieved 1.2 million plays on Vimeo and hundreds of thousands of views on YouTube. Kinberg is to be a producer and Blomkamp and executive producer. It is perhaps no coincidence that Blomkamp’s breakthrough movie District 9 also began life as a short internet sensation, Alive in Joberg.

Robinson’s CGI-rich teaser features men with harpoons hunting massive flying space whales in order to use their eggs as starship fuel. What’s not to love about that?

As reported in Deadline, the screenplay for the fleshed-out feature is being penned by Fight Club scriptwriter Jim Uhls. And Robinson has some experience himself. His previous work includes the excellent Oscar-nominated animated short Fifty Percent Grey (2001) and the Liev Schreiber starring sci-fi horror movie The Last Days on Mars (2013).

Characterised by some as “Moby Dick in Space”, we prefer to think of Robinson's new project as “Finding Big Nemo” (sorry) or “A Really Big Space Fish Called Wanda” (sorry again). Watch the short – you’ll have a whale of a time (sorry). Seriously, it really is excellent.

The Glass Hotel: a fragmented ghost story about the collapse of a Ponzi scheme
10