The war against the War

In Dublin, a combative, ragtag coalition of feminists, socialists, trade unionists and just plain messers all did their bit for the anti-war effort 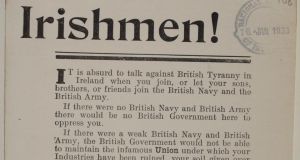 Leaflets oppose support for the Voluteers and enlistment in the British Army - "Without the Irish the English would have been beaten by Napoleon a hundred years ago..." 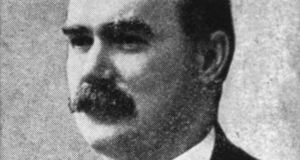 Two of the most serious political casualties of the outbreak of war in August 1914 were the infant internationalist labour and women’s movements. In most of the belligerent states, the movements split into majority factions that supported the war effort and minority groups that cleaved to their internationalist vision.

Ireland was no exception, except that divided nationalist aspirations meant that three main streams emerged. One supported the British war effort and initially included many Redmondite nationalists; another represented the growing strength of militant nationalism; and a third remained as a shrinking internationalist wing that eventually only retained significance to the extent that it realigned with militant nationalism.

All came from impeccably middle class backgrounds. Bennett would remain a pacifist throughout the war, transforming the Irish Women Workers’ Union into the largest female activist organisation in Ireland with her lifelong friend Helen Chenevix. Sheehy-Skeffington became a leading figure in Sinn Féin following the death of her husband Francis in British military custody in 1916.

Dockrell continued to be a leading figure amongst Dublin Unionists, chairing the Blackrock Urban District Council, one of the few local authorities over which Unionists retained control after the first World War. Her organisation supported the war effort and donated a bed to the Red Cross hospital in Dublin Castle bearing the rather ambiguous legend, “Members of the Committee make a point of interesting themselves, alas, in the successive inmates of the bed”. 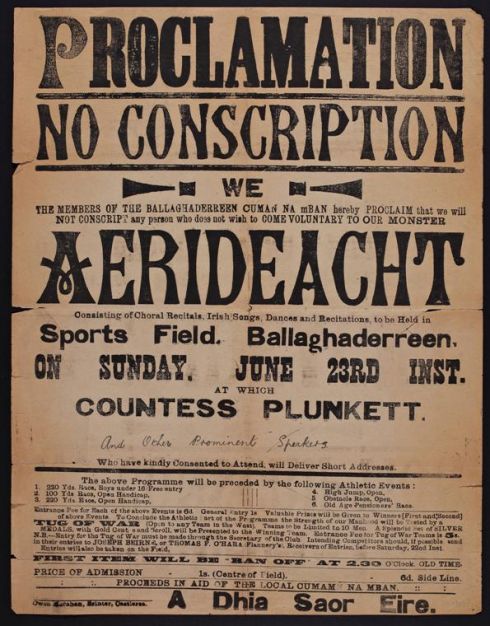 By contrast, Hannah’s husband, Francis Sheehy-Skeffington put the slogan “Votes for Women and Damn Your War” on the front of the Irish Citizen. There was more concern at his use of the word “Damn” among subscribers than the content of the message.

There were other, less well-known pacifists such as Geoffrey Dunlop, who courted prosecution by putting his name on posters declaring “Warfare is murder”. Irish magistrates were reluctant to make martyrs out of pacifists, or indeed militant nationalists before 1916. Suspended sentences, fines or deportations were preferred to imprisonment and the consequent threat of hunger strikes.

Where determinedly militant pacifists were concerned, such as Francis Sheehy-Skeffington, the “Cat and Mouse” Act was used to release them if they did go on hunger strike. Sheehy-Skeffington was allowed to argue his case in the Citizen in more uncompromising terms than would have been permitted in Britain. “War is necessarily bound up with the destruction of feminism . . . feminism is necessarily bound up with the abolition of war,” he wrote.

Yet Sheehy-Skeffington could not avoid taking sides when war came to Dublin in the shape of the Easter Rising. He agreed to serve inn the civil administration proposed by his friend and fellow socialist James Connolly. Indeed, he was the only member of the committee to take his responsibilities seriously enough to try to stop looting in the city.

Connolly belonged to the growing constituency of militant nationalists who saw the war as an opportunity to strike a blow for independence. As editor of the Workers’ Republic, he became an unashamed apologist for Germany, arguing that its imperialism was more progressive and civilised than the English “pirates” whose power rested on maritime domination.

In fairness to Connolly and his internationalist credentials, he founded the short-lived Irish Neutrality League, which suffered from the chronic left disease of more chiefs than Indians, and he only took the road to armed insurrection after the collapse of the Socialist International on the outbreak of war. 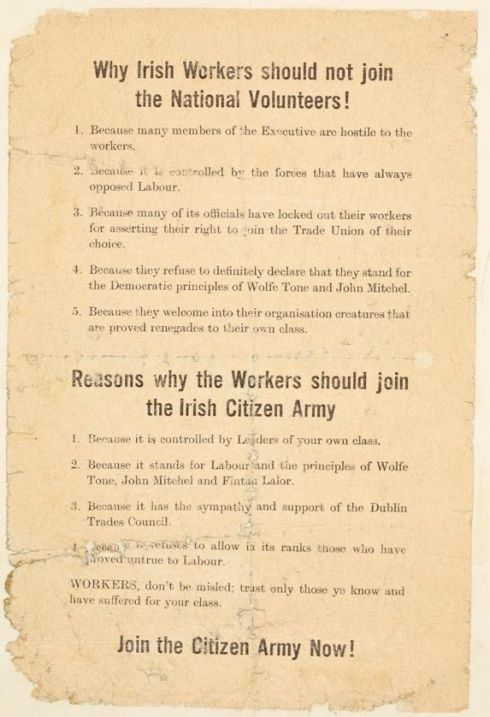 When socialist parties across Europe protested at the war, he wrote, they “fired their last shot against militarism and were left like ‘children crying in the night’.”

Instead of crying, Connolly threw in his lot with the Irish Republican Brotherhood in the hope that “Ireland may yet set the torch to a European conflagration that will not burn out until the last throne and the last capitalist bond and debenture will be shrivelled on the funeral pyre of the last warlord.” Connolly advocated a cocktail of militant nationalism and revolutionary socialism that would play a powerful role in determining the course of 20th-century history.

The wider labour movement in Ireland was paralysed by deep divisions between workers in Ulster, who supported the Union, and nationalists who supported home rule. When war broke out, trade unions did what they do best – protect members’ material interests – and the de facto recognition that the government gave them to avoid conflict on the industrial relations front provided them with ample scope. Workers would not oppose the British war effort so much as ensure they were well paid for contributing to it.

Labour opposition to the war took on its most explicit form in the general strike against conscription on April 23rd, 1918. Without it the resolutions passed by the Irish Volunteers, the Irish Party and the Catholic Hierarchy in the preceding days would have had little concrete expression. On Sunday, June 9th, when a “Woman’s Day” against conscription was organised, the Irish Women Workers’ Union mobilised 2,400 members to march to City Hall and sign the anti-conscription pledge, compared with 700 members of Cumann na mBan. Yet it was the Catholic churches to which workers resorted on both days when the marches ended. The Irish Trade Union Congress, in its opposition to the war, was subsumed in the increasingly Catholic ethos of the separatist movement.

Perhaps the most potent force stirring opposition to the war, apart from the hardships generated by war itself, was the mosquito press. In addition to the Irish Citizen, which survived Francis Sheehy-Skeffington’s death to be edited by his widow and then Louie Bennett, and the Workers’ Republic, which died with Connolly, there were Arthur Griffith’s publications such as Sinn Fein and Eire Ireland; the IRB’s Irish Freedom; Terence MacSwiney’s Fianna Fáil; the Irish Volunteers’ publications Irish Volunteer and An t-Oglacht; JJ O’Kelly’s Catholic Bulletin; Michael O’Rahilly’s An Claidheamh Soluis; Joe Stanley’s Gael and many others.

Humour was their deadliest weapon and John Redmond the usual target. When Redmond announced dramatically in early 1916 that a German officer had been captured with a map showing “every farm in every parish” in Ireland, the Gael hailed the “German giant”. It calculated that the map must be scaled six inches to the mile and measure 150 feet by 80 feet.

A raid on the Irish Transport and General Workers’ Union shop on Eden Quay to seize copies of Gael almost sparked a shoot-out involving Connolly and Dublin Metropolitan Police officers. It was Connolly who subsequently introduced Stanley to Padraic Pearse so that he could produce the Irish War News bulletins in the Easter Rising. 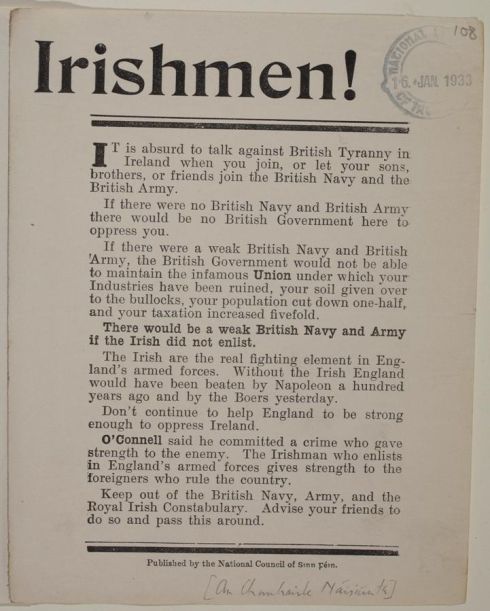 Personal relationships were often strained by the emergence of competing aims, as between Louie Bennett and Hannah Sheehy-Skeffington over the editorial policy of the Citizen. The former was determined to focus on social and economic problems facing women while the latter saw support for independence as the priority.

A similar dispute arose between Countess Markievicz and her sister Eva Gore Booth, a committed pacifist and champion of women workers in Britain. Nevertheless Gore Booth rushed to Dublin after the Easter Rising to visit her sister in prison and, at her request, helped the family of Michael Mallin, chief of staff of the Irish Citizen Army, who was awaiting execution.

There was one other group, almost invisible, now long forgotten but then potentially more dangerous than all the rest: deserters and absentees from the British armed forces. They soon constituted the largest group of offenders in Dublin, far outnumbering militant nationalists and other opponents of the war.

In January 1916, out of 255 men arrested for all offences in Dublin, 112 were deserters or absentees. In the same month only one man was arrested under the Defence of the Realm Act in the city and four people (one of them a woman) for unlawful possession of firearms. All were fined. Another woman, a 19-year-old weaver, received six months hard labour for harbouring a deserter.

The war was ended by men who voted with their feet in the Russian and German armies. Most were not pacifists, feminists or socialists, although the ideas of all these movements increasingly percolated armies as the war dragged on. They just didn’t want to fight any more. Ultimately, they formed the most powerful, if relatively inarticulate, anti-war movement of all.