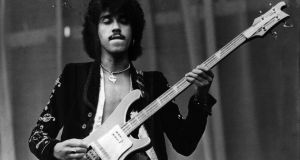 On August 22nd, 1977, in the Late News column of The Irish Times, a brief news story snuck into the newspaper.

“A number of people were arrested and drugs were seized when gardaí raided Castletown House, in Celbridge, Co Kildare, this morning where a party was being held for a rock singer, Phil Lynott of the Thin Lizzy group. Several hundred people were attending the party in the stately Georgian mansion, including many who had ‘gate-crashed’ .”

At just two sentences long, the story captured the hedonism (for some) of that era – police raids, rock stars, stately mansions and drugs. The summer of 1977 was the moment rock music tipped over in Ireland, laying the foundations for what we now call festival season.

The raid actually occurred on the morning of August 21st, an auspicious date which also marked the first rock festival in Dublin.

If we had a monarch that day, it was Phil Lynott

Of course, in a precursor that Corkonians are still probably talking about, Cork got there first with Rory Gallagher heading the Mountain Dew festival in Macroom that June. Two months later, Dublin followed suit.

We’ll pause here to allow anyone from Cork reading this to tell the person nearest to them that Cork had a rock music festival before Dublin did. Right.

The day before the Dalymount gig – August 20th – was Lynott’s 28th birthday, so naturally, he was going to celebrate, even if there was a massive show to be played on the 21st.

The legendary music journalist Chris Salewicz of the NME was in town with Lynott at the time, “The day before the Dalymount Park show, I found myself with Phil in the centre of Dublin, in Bailey’s Bar where the 1916 Easter Rising had been planned,” he wrote.

“It was the singer’s 28th birthday, and he was downing some celebratory pints before moving on to some serious partying at Castletown House in County Kildare, home of Desmond Guinness, of the Guinness dynasty. He gazed into his glass of beer as he extemporised on his approach to his existence as a rock’n’roller.”

In the book Thin Lizzy by Alan Byrne, a version of events at Castletown House was detailed by Thin Lizzy guitarist, Brian Robertson.

“The police arrived at the venue. They sprung out of thin air and of course there was a mad panic so everyone threw their stash in an open fire. The police happened along to the overwhelming funk of weed in the place.

“We all tried to tear away in various directions to avoid any sensationalism. I managed to slip away and eventually I got a lift from some truck driver back to the hotel, that was one close shave I can tell you.”

Castletown House was bought by Desmond Guinness in 1967.

Jacqueline Kennedy Onassis visited the house the same year. Mick Jagger and Marianne Faithful hung out there in 1968.

By all accounts, it hosted some epic parties, and was also frequently advertised in The Irish Times throughout the 1960s and 1970s as an entertainment venue; plays, supper entertainment, the West Wing restaurant, Georgian caper banquets, and the Irish Georgian Society Halloween party.

Lynott survived his 28th birthday bash at Castletown, made it back to Dublin, and played the Dalymount gig before the drug bust even hit the papers.

“If we had a monarch that day, it was Phil Lynott,” Frank McNally wrote in The Irish Times in 2007.

“I remember him striding onto the stage and shouting into the microphone: ‘the Jacks are back!’

This was a GAA chant – not something you heard a lot from international rock stars then – synonymous with the resurgent Dublin football team, which that very same afternoon had beaten Kerry in a classic All-Ireland semi-final, down the other end of Whitworth Road.”

A week and a half after the Dalymount gig, a new Thin Lizzy album was released: Bad Reputation.